My coworker Julie made my day today. She called me to the conference room kitchen after returning from an off-site event with a surprise. It was in the form of several pints of Carmela Ice Cream, who had catered her event.

She passed me a spoon with a grin. The salted caramel was just starting to melt, but continued to blissfully melt in my mouth like a pat of frosty butter. Cacao nibs crackled through bites of dark chocolate. One vibrant with honey and subtle lavender notes made me pine for a warm tarte tatin to smother with it. But the winner was the fresh mint with cacao nib - "The mint is fresh from his garden" Julie told me, and the proof is in the pudding.
The LA-favorite is available at farmers markets (Hollywood, Culver City, South Pasadena, Pacific Palisades) and a few local stores (Naturewell, The Curious Palate, Locali, Joan's on Third).

Images via carmelaicecream.com
Posted by Nathan Hazard No comments:

Buvare: Of Mint Juleps and the Sea

Practically the reason to get excited for spring's sneaky sinkhole into summer - A celebratory Derby Weekend Mint Julep! 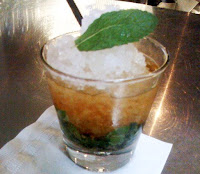 Sorry Cinco De Mayo, your overcrowded, overpriced nacho chowdowns are a WEE bit less glamorous than seersucker suits, giant brimmed hats and icy stainless steel tumbers (besides.. to be fair, I am excited for margaritas anyday). No, this is the time for frosty, sweet and potent mint juleps!
Though I had not yet been to chichi Melrose French brasserie Comme Ça, I was impressed by their all-Derby-weekend $5 mint julep special because it embraced not only great Southern tradition, but also those who possibly wouldn't otherwise (or can't afford to) dine in their establishment (foreshadowing: I might just be one of them).
It was Friday evening, and somewhere far away horses were being groomed and well-dressed patrons taking their boxes; I was cruising across Hollywood to meet my friend for a julep. Comme Ça wasn't a scene we had in mind for our "happy hour" date, but with $5 juleps, we decided to risk it. Upon entering the dim, spare-yet-overdecorated room, I instantly felt underdressed - even though we were practically the only people there. Two thin young hostesses connected at the elbow smiled and blinked at us. Pale dusk lingered over the crowded bartop on the far side of the room from a skylight above, and I already knew that was probably the only place we could sit to get a drink (despite three empty dining sections). This was confirmed by two sets of lipglossed apologetic smiles. There were six aluminum stools at the bar, four of which were filled. We settled at the far end, next to what we quickly smelled was also the raw bar. Green-patinaed lobsters and shellfish chilled (literally) an arm's length away. The toothpaste-model-lasciviously-tailored-vested-rolled-sleeved bartender sauntered down the bar toward us with cocktail naps and pearly whites gleaming. He was visibly disappointed by our mint julep special order (of course after we pretended to consider the other cocktail offerings) but to his credit hid it well and adroitly suggested a dozen oysters. We politely declined.
The barman's finely-crafted julep redeemed any vibes thus far. A dome of crushed ice pinned a bushel of muddled mint and cane sugar to steep at the bottom of the glass in a heavy hand of bourbon. The only missing element to perfect was the stainless cup. We were silent for a moment, mmming into our straws like children with foot-tall milkshakes.
A third friend joined us, immediately disapproving of the tiny row 'the majority' of the restaurant was crammed into. While an additional stool was produced, the dining room remained prudishly empty. The smell of the half-chilled crustaceans was also quick to challenge our friend. We admitted we both tried to ignore it before she arrived, and had breathed from our herbaceous cocktails. I was thinking about a small nosh.. as I have been in service, I feel that taking a seat at the bar and ordering one $5 drink (albeit acceptable) is not altogether polite. My joining friend sipped her julep, professing that unless we got a table, staying at all wasn't sounding ideal. I had to agree, as we were huddled in a tight triangle, crossing arms and legs with each turn or gesture. The menu was also relatively pricey for what sounded like modest starter portions. A musk I could only imagine was clam-runoff wafted past; decision made. Our bartender was quick to close us out, checks laid as the hazy evening light above closed in on the bartop, crawfish eyes gleaming in the candlelight.
The room was still empty as we left, perhaps two tables finishing their early dinner. Well-groomed and "sexy-lipped" (according to one friend) busboys began shuffling chairs and straightening place settings as we bid adieu, a line of GQ-chic servers across the far wall, waiting. Perhaps there was an invisible Tsunami of swishy diners en route. They certainly were ready. Outside on the street, though, it was abnormally quiet for a Friday in WeHo. As we shuffled across the street for a quick bite and drink inside cozy Taste, my friend noted the B rating posted at Comme Ça. "Shrimp cocktail!" we all laughed.
Posted by Nathan Hazard No comments: 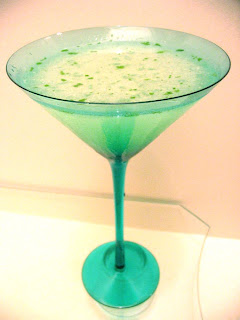 One of the most intensely nostalgic flavors for me, one which I tasted the other night for the first time since college days, is the delicious and brilliant Eugene-native concoction now widely known as the Richmond Gimlet.
Coddled into ageless grandeur by superstar NW mixologist and bartender extraordinaire Jeffrey Morgenthaler, the Richmond Gimlet was pretty much invented before my eyes one lazy summer in Eugene, late nights at the hidden treasure that was the traincar-narrow bar tucked in the back of Bamboo restuarant. After brutal shifts at Marché around the corner, manager Daniel Richmond and I would park in Morgenthaler's bar and let him pick the drink. Daniel's picky nature and Jeffrey's drive to impress and perfect led to the simple and elegant marriage of fresh ingredients that make up this refreshing cocktail. Not too sweet, not too sour, not too stiff - The Ricmond Gimlet truly is a definitive cocktail and modern classic. The herbaceousness of the Tanqueray No. 10 gin, hint of fresh mint and fresh-squeezed lime will win you over too.. Just follow these simple but important steps.

Be sure to check out Morgenthaler's wicked website of all-things-wet, where you will find many more genius recipes, advice and forums like "How To Make Tonic Water", "How to Make an Angostura-Scorched Pisco Sour " and "How NOT To Make A Mint Julip".