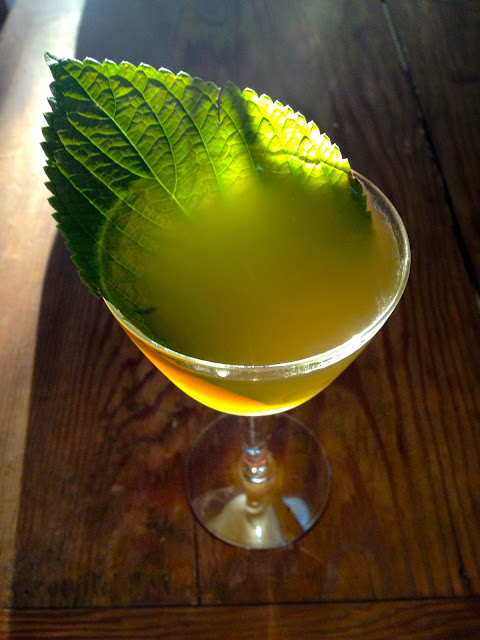 I had never sampled Korean cuisine before moving to Los Angeles. Casual as a boisterous group trip to Soot Bull Jeep for KBBQ may seem now, I am well aware of the benefit we have living in this city to enjoy such motley experiences. To many though, even LA denizens, the overwhelming bounty that is our Koreatown (with one of the highest population densities of all neighborhoods in Los Angeles and the United States) remains still an indecipherable mystery. Determined to enlighten international diners about the diverse flavors and health benefits of Hansik (Korean cuisine), The Korean Food Foundation has launched a series of city restaurant guides, including a slick 200-page guide to LA's Korean restaurants, from Koreatown to Marina del Rey, Buena Park, Garden Grove, Pasadena, and Los Feliz. Edited by legendary LA Times & LA Weekly food writer and cookbook author Barbara Hansen, and written with the help of many top local bloggers, the guide is now available at The Korean Cultural Center, through PDF download on The Korean Food Foundation's website, and as a handy iPhone app available in iTunes. To put the guide to the test, I teamed up with my recurring foodventure cohort Kristin "the Cuisinerd" to embark on a mini K-town food marathon. Bibambap, we don't stop!
Check it out over at theCuisinerd.com. 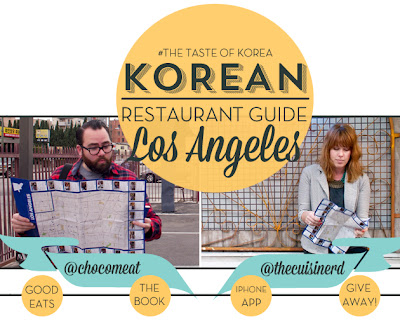 During our walkabout through K-town and its eateries, pubs, markets and banchan delis, I became inspired to craft a cocktail from Hansik ingredients, with a fresh profile to compliment its flavors, and involve the Korean concept of Ssam (literally meaning "wrapped," in which edible leaves are used to wrap meat, condiments, and banchan).
Perusing Han Kook Market, I decided to start with the obvious base spirit - Soju (소주). Known mostly to me these days as the cocktail spirit of choice for restaurants with a beer/wine license, this clear, slightly sweet distilled spirit is made from grain or sweet potatoes and typically has an alcohol content of 40 proof (20% ABV) - Half that of, say, most vodkas. Nevertheless, it is the most popular traditional Korean spirit, deserving of a second chance. I was also intrigued by Makgeolli (막걸리), a milky, sweet low-alcohol (6% ABV) beverage made from sticky rice, known for its high fiber, protein and vitamin levels. With some fresh produce and a lucky hand, Shiso Lovely practically made herself.

Add shiso leaves and honey syrup to a shaker and muddle. Combine remaining ingredients, pack with ice and shake well. Strain into a chilled cocktail glass lined with a slapped shiso leaf.

Shiso Lovely also works well as a long drink. After shaking, strain instead into an ice-filled highball glass. Top with soda and garnish with a green maraschino cherry, candied lotus root and shiso leaf ssam.

*For the Honey Syrup:
Combine 1/2 cup of water with 1/2 cup of honey in a small saucepan. Bring to a simmer over medium heat, stirring frequently until honey has dissolved. Remove from heat and cool completely. Keeps in the refrigerator for up to a month. 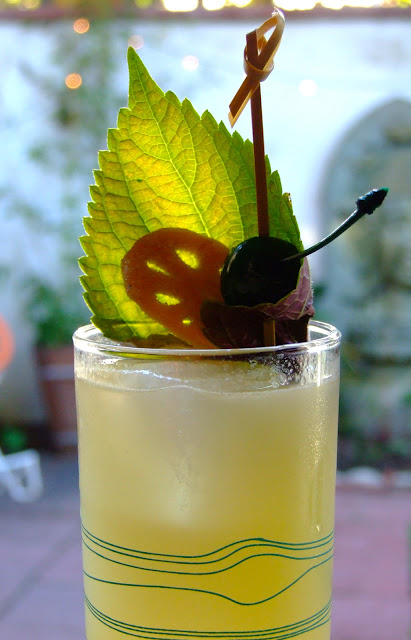 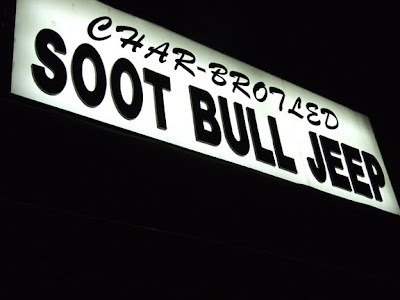 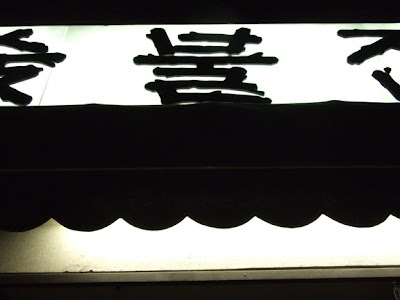 I flipped the car around while attempting to call Lisa, still unable to find the restaurant's signage amongst the congested Korean strip mall mélange. I was scouring the wrong intersection of course, and made my way back to 8th, Lisa illegally aiding me. The black and white sign was actually hard to miss once on the right street, even with a small parking lot next door. I was excited. Soot Bull Jeep is one of the old school granddaddies of the Korean BBQ set, and it was my first time. 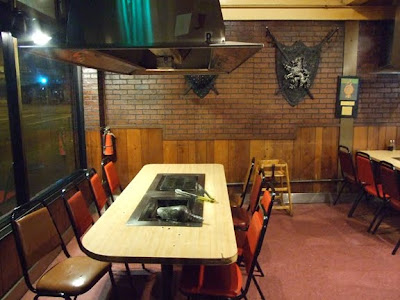 What immediately distinguishes SBJ from the rest of the class is the use of charcoal in their tabletop grills. This means SMOKE. Unlike most of the streamline modern KBBQ joints, SBJ is also of a more... modest decor. Frankly, I loved it. It was early yet, so the room was only mildly smoky, the smell of which which only added to my excitement. 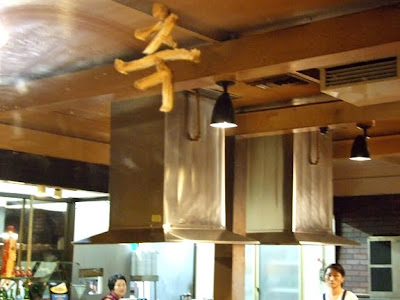 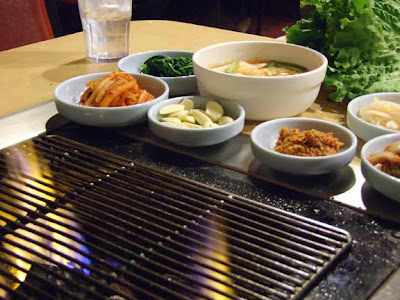 As soon as we sat, a server brought us menus and started setting out the banchan. These traditional side dishes included kimchi and other brined vegetables, noodles, garlic, lettuce leaves for wrapping, and various condiments for dipping.
We ordered a couple OB lagers and were each brought a hot starchy soup and small salad before we even ordered. We decided on two proteins to share - the kalbi (marinated beef short ribs) and marinated shrimp. 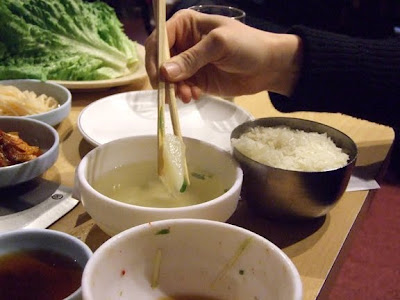 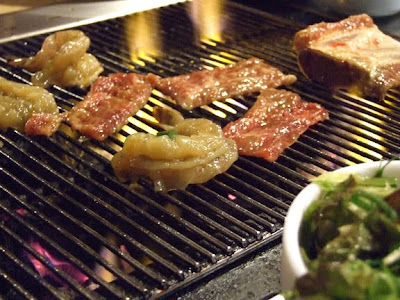 Not used to a hot flaming charcoal grill inches from my arms/face, I couldn't help but wonder how many incidents at KBBQ per year result in a hospital visit. Still, the warm glow on my face reminded me of camping and tending to the crackling short ribs was a novel conversation piece. Lisa showed me how to cook it just right and how to best use the lettuce wraps, first dipping the grilled meat in the soy/vinegar sauce then adding along with den jang (bean paste), kimchi and the various spiced salads all wrapped up taco-style in a romaine leaf. For extra awesomeness, a freshly grilled garlic clove.
When things got spicy, the bland warm soup suddenly had an understandable purpose, the starchy smooth texture a small break between awesomely flavorful bites of BBQ.
I know SBJ is sometimes criticized for it's price and not being All You Can Eat, but by the end of our supply, I was stuffed. The price ran about $20 per plate/person including all the fixings, and was more than pleasing. Can't say I'd complain, but surely in the future may dabble a bit among the different KBBQ joints to understand the differences. I have trouble imagining it without the smokey char-broiled flavor however. 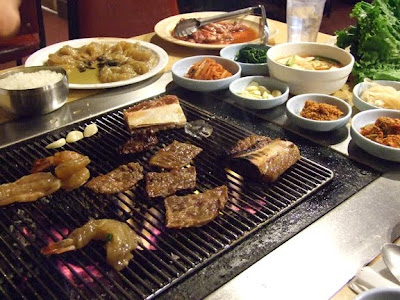 I decided ultimately that the ambiance of the loud bustling room charmed me, from the vinyl brick paneling to the King-Arthur-chic shields to the Victorian bathroom placards. The service was at times brusque, but overall attendant and sufficient. The food was phenomenal. Another quirky gem tucked quietly away in the bowels of the city, left to be forgotten, or forever treasured, depending on who you talk to. 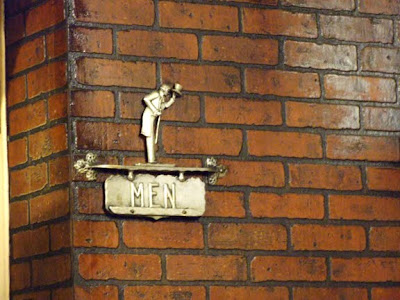 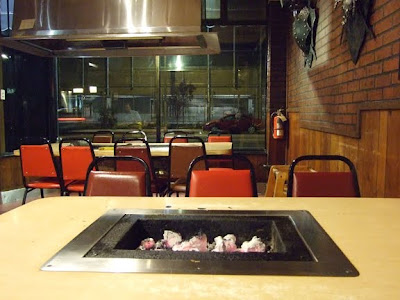 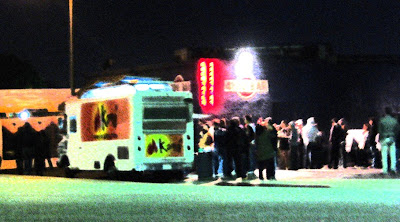 The time now is 12:58am
This may be the first time I have written on an experience immediately following.. But this could not wait. Too rich.
This isn’t really a post about food. More about cultural phenomena, the power that is word of mouth, trends, and innovation. It’s about hunger. I thought I was simply going to get tacos tonight, but in addition I was pinned by a mob, saw some celebs, witnessed a fight (over tacos), laughed with strangers, and awoke my taste buds.
I’d been flirting with the Kogi truck’s website for a solid week or two, fantasizing about the trucks’ schedule.. Trying to imagine myself in those places at those times, how long the line would be and who might be there. The closest it would be to my home was in Silverlake tonight, Thursday at 10:30pm, parked outside of the 4100 Bar. I vowed to be there.
OK back story:

For several months now I’ve been hearing rave reviews about this roving taco truck. A Korean taco truck. Yeah, we’re talking Korean BBQ short ribs wrapped up in tortillas and Kim chi quesadillas. Only in LA. What’s more, since the truck is always on the go, you have to follow it on Twitter to get the current location. Luckily for the Twitterless, the website hosts a feed of the most recent posts, as well as a rough weekly schedule.
So there I was earlier tonight, 10:00pm, pulling up beside darkened Sunset Junction shop windows and scoping the scene. I saw a small gang of loiterers outside of the 4100 down the block. They were already hovering.
“First time?” a tipsy Korean girl in a furry hood asked as I approached the crowd and settled beside her. I nodded excitedly. Everyone was abuzz; the electricity in the late winter air was tangible. The 40-some-odd of us were shifting from one foot to the other in anticipation of something that hadn’t even arrived yet. I checked the time; it was now past 10:30 and still nothing. The crowd was mounting, in an unorganized sprawling continent spanning from the bar door down to the parking lot around the corner. I anticipated madness. Within minutes, I heard chirps and shouts, as if a gleaming tour bus was approaching an alley of adoring fans. A modest catering truck driven by insta-celebrity Kogi MVP Chef Roy himself pulled alongside us, he hung his baseball-capped head out of the window to address his people with a raised party fist. “Aziz!” he shouted to the Human Giant star and loyal customer in the crowd. Everyone cheered. 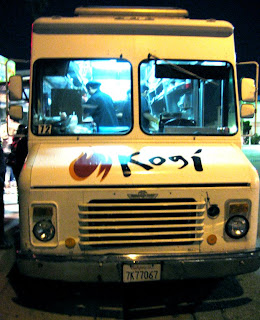 The truck pulled up literally onto the sidewalk where we had been standing, so the mob was ushered backward to the parking lot, where you could feel the tension thickening. Everyone started murmuring complaints about who was there first, and when. I understand the concern, but I for one had zero choice where I was going to end up in the line, I was pinned firmly to the wall, where I stayed planted for the next 20 minutes until the line inched forward. The truck teetered ominously on its perch and someone behind me commented that this was a Darwin Award waiting to happen. A wily taco lover in the back shouted something about cutting in line to a few people toward the front; the usual offensive remarks were tossed back and forth from each ‘gentleman’ until someone must have bit their thumb, because the escalation became very real. People laughed, others taunted, while most rolled their eyes, huddled against each other in the cold, and squinted ahead toward the aromatic truck. Chef Roy stepped in, further delaying Taco time, to appease his people and exorcise the drama with his winning grin. 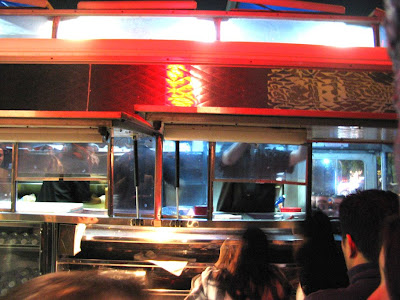 Inside the truck Roy’s cooks worked furiously. Tacos began filing out of the small window. Somehow, I made it to the front of the line, and I felt like Charlie approaching that chocolate factory for the first time. I decided to sample three tacos (which, coincidentally is the limit per customer!). I ordered a Korean Short Rib, Spicy Pork, and Spicy BBQ Chicken. Each was dressed with sesame-chili salsa roja, julienne romaine lettuce and cabbage tossed in Korean chili-soy vinaigrette, cilantro-green onion-lime relish, crushed sesame seeds, and sea salt. Eager to escape the twisted juju of the mob, I crossed the street to taste my bounty is the serene glow of the Jiffy Lube. Bite one converted me. 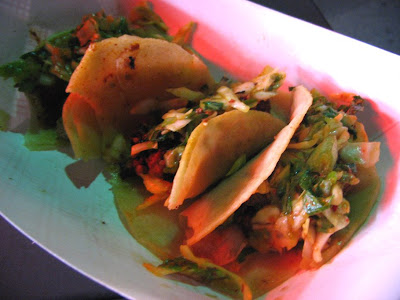 The Short Rib was a (pardon the cliché) true explosion of complex and intricate flavors. Deeply savory with a bbq tang, rich smoke, brown sugar sweetness, hint of nuttiness and a vinegar-sweet/tart finish. Yes, I think I finally understand you, elusive umami. The Spicy Pork was less spicy than expected, but similarly flavored and robust. The Spicy BBQ Chicken too could have benefited from more of its namesake (or a healthy dose of Sriracha), but had a delightful crunch that I wanted more of. Much more. I devoured all three tacos before I made it to my car, delicious sweet grease dripping from my fingers. My palate was content, still trying to process what it had experienced, as I too tried to piece together how the last couple hours of my life were spent. I drank the [Korean] Kool-Aid, I jumped on the tacowagon. I know I’ll see Aziz again, and hope when I do it’s not at the end of mile-long giant human line.

Kogi is also available in a reliable, stationary sit-down format Mon-Sat from 6pm-12am at the Alibi Room (12236 Washington Blvd, Culver City), which I recommend for the weak of heart and/or claustrophobic. 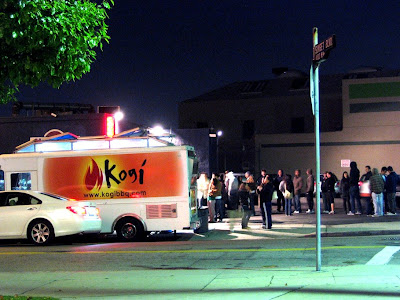