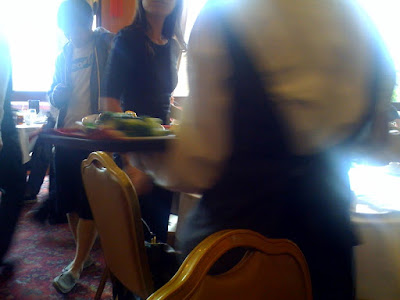 It was Sunday. I don't even think I was hungover, I think I was still drunk. The night prior, wine had turned into vodka had turned into beer had turned into this headache. Phone buzzed, it was Cat. Dim sum @ 12 for Norm's bday it said. I replied that I was hungover. She replied me too, it will help. An hour later I was battling the chirpy Sunday tourists in Chinatown for parking, squinting into the sun. Not feeling like a fighter today, I pulled into the first lot I saw and dug for dollars. Angry rainclouds rolled over the hills and I frowned down at my pristine white canvas shoes as I skipped toward Ocean Seafood, running late of course.
I had never done Chinatown dim sum, only Monterey Park, but had heard Ocean Seafood was the way to go for these parts. With a nod to the hostess and up the red carpeted stairs, massive tanks of live sea critters waved their pincers at me. Across the expansive room of roving carts I finally spotted my friends. I collapsed with a sigh and snagged a shrimp, poured some tea, ordered a beer, and said hello... 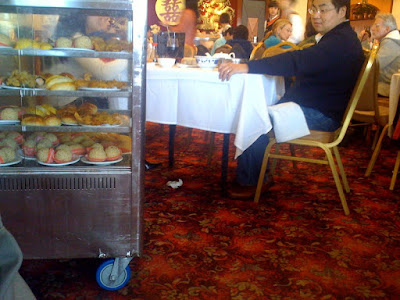 Gosh. I love dim sum. And I don't go out for it nearly enough. Perhaps because it took a while to return after my traumatic introduction back in Portland many years ago. A very traditional sampling with my Chinese friend's family sent a then-vegetarian me running for the hills. Thankfully I have been turned around, and now crave it regularly - especially BBQ pork buns! On the Lazy Susan when I sat down were some crispy crab-stuffed mushroom caps and oh-so-bad-but-oh-so-good walnut shrimp, with tangy mayonnaisey sauce and candied walnuts. Next we got a few orders of Gao (dumplings) - some rich vegetable dumplings and shrimp and pork shumai. Some piping hot baby bok choy with hoisin rounded out the selection. Before long I was scouting for my BBQ pork Bau.. A nice lady produced an order of the baked buns, which I accepted graciously (though steamed are my favorite - not a fighter today). So good. A few more friends meant a few more orders of shumai. And certain stuffness. It ended up about 20 bucks per person, which seems more than fair for the feast, not to mention enjoyable people-watching, colorful ambiance, and a great view of the roiling clouds over the city. I waved goodbye to the lobsters and somehow managed a craving for a boba tea on the way to the car. Oh, and picked up a $7 Chinatown version of the trendy Japanese donabe clay pot (more to come on that).