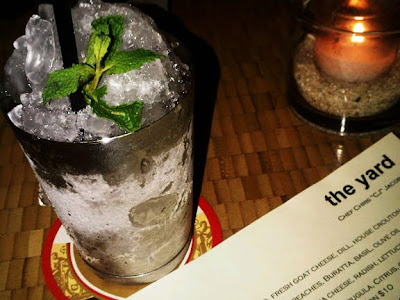 I don't find myself in Santa Monica too terribly often. Some stops over the summer for the ever-fleeting daylight beach hours, sure. But by twilight I'm often driving back east with sleepy sun exhaustion, not dining at one of the many eateries by the sea. I was glad when a theater event recently landed me on the west side with a need for a light late Friday night nosh.
Top of my to-do list was to check out The Yard, per invitation from chef Chris Jacobson (better known as CJ from season 3 of Top Chef) following the chili cook off we judged together last month. The self-proclaimed gastropub's bar hours fit the bill, but the Broadway crowd filled the house, so we worked our way up to the bar for a cocktail while we waited for a table. Their signature whiskey smash combined bourbon, Solerno blood orange liquer, muddled blood orange and mint, topped with crushed ice derby-style in a silver tumbler. 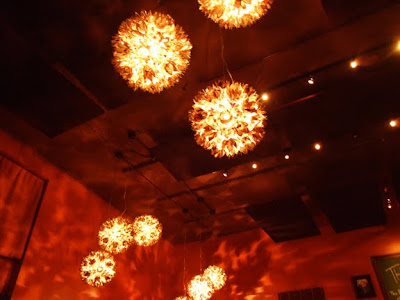 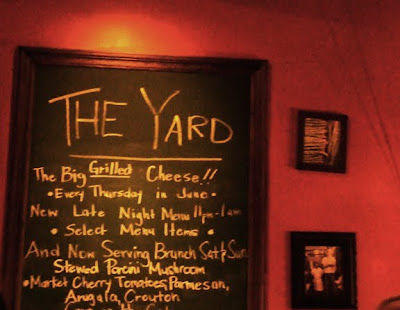 The Yard is a casual, no-frills single room, dimly lit with hanging sunburst lanterns. A massive chalkboard on the burnt orange wall notes what's fresh from the market. And I'm just going to say it, the food is obviously the selling point here. Also, a word about chef CJ. This guy's a true... people's person. He's cooking with one foot in the kitchen, always peeking out to front-of-house. I watched him deliver dishes to several tables, crouching his towering frame beside them to chat for several minutes before rushing back to the line. When I finally caught the social butterfly's eye, he grinned and asked how much chili I'd been eating the past few weeks. I admitted none. Rubbing his hands together he began to plot, raising an eyebrow he said "well one moment then!" and disappeared again behind his curtain. 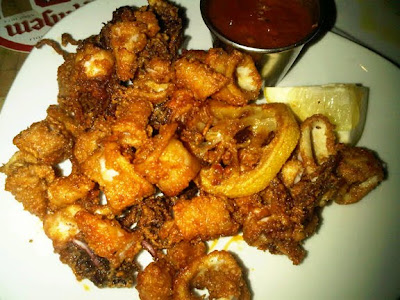 Once we were seated, first order of business was the paprika spiced calamari with roasted marinara and fried lemon. Our server admitted it was too paprika-heavy for her, but I had to disagree, the mellow kick added a clever dimension to the typical pub fare. 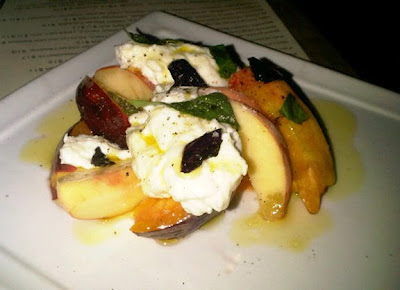 We were urged to take advantage of the stone fruit, prime from the market earlier that day. Offered with burrata, sweet basil, and fruity olive oil, I really wouldn't care what it was, but the peaches were sublime indeed, and the flavors intermingling just heavenly. 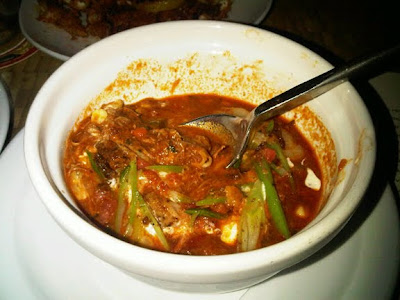 CJ suddenly appeared, startling our server who was checking in on us. He carried two heaping bowls of chili. "Try that!" He beamed as the tables around us craned their necks to see what he had brought. In the last several minutes he had whipped up a quick "chili" of turkey, pork, and short rib, with corn, Grafton cheddar, fried onions, shaved romano beans & yellow wax beans, cumin cream and crispy duck skin. Caught up in the moment, tasting the chili as CJ watched, I didn't get a shot of the presentation so forgive the image above (in fact, forgive all of these images taken with my phone!) The chili was actually pretty tasty having not slow-cooked all day, with ample spice and a hearty texture. The crispy duck skin knocked it home. 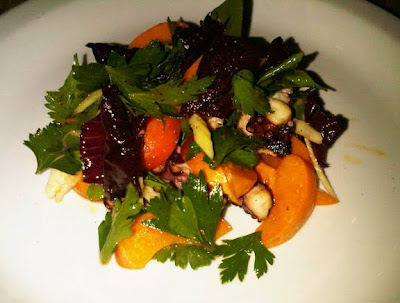 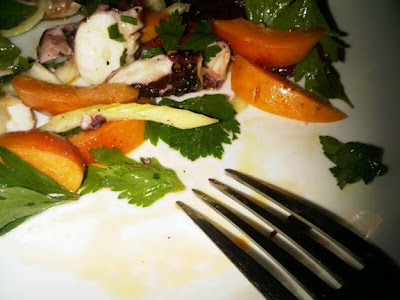 Asking CJ what of the menu we should try next, he insisted on the octopus salad. How could we say no? The Spanish octopus was grilled and sliced, tossed with farmer's market apricot, piquillo, Italian parsley, and lemon. The deceivingly simple preparation was refreshing and bold. The octopus was not chewy and remarkably complimented by the pungent Italian parsley, cut by the sweetness of the apricot. I would have no qualms suggesting this to octopus connoisseurs and rookies alike. 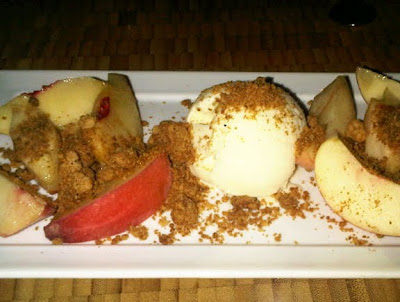 The dessert was less inspired, but again highlighted the quality of the ingredients. The raw 'deconstructed' peach cobbler ended the meal on a light note, which for late-night is not a bad thing. As we finished up, CJ saddled up at the bar for a quick drink, chatting up more of his customers. I began to sense a community vibe of returning guests from the neighborhood, and CJ as the wily and likable big fish. It made me look forward to returning to Santa Monica and the Yard for more of chef CJ's understated fare. Otherwise, he assured me I'd see him at the next Free Chili - Although I have a feeling next year he might be competing instead of judging.