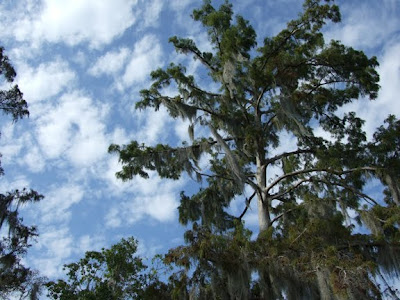 Day two started bright and early when the shuttle from Airboat Adventures swamp tours tooted their horn outside of the St. Philip at an ungodly cruel hour for vacation. We picked up a few more adventurers outside of hotels around the French Quarter and were off to the swamp. An hour or so outside of town, and just past the Jean Lafitte National Historical Park and Preserve we pulled up to a dock with a handful of airboats and a cabin-like lobby housing an albino gator and a host of striped baby gators. 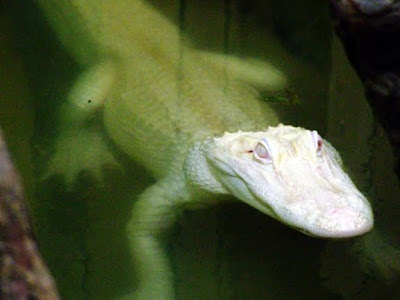 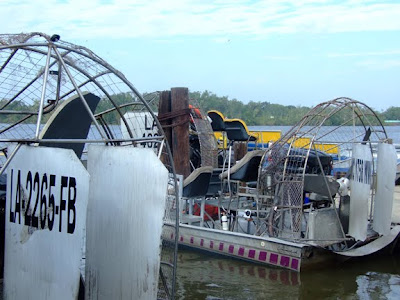 Within minutes we were off. What I immediately appreciated about the tour was the small size - with just 8 passengers and a guide, we were flying across the water at high speeds unlike the clunky Jungle Cruise type "party boats" I'd seen docked at some more commercial swamp tour spots along the drive out. Our small agile boat also let us explore some of the more hidden and mysterious narrow and shallow waterways with ease, even hopping the occasional log when necessary. 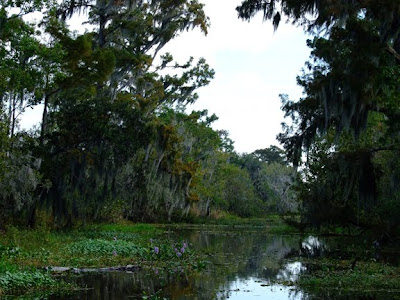 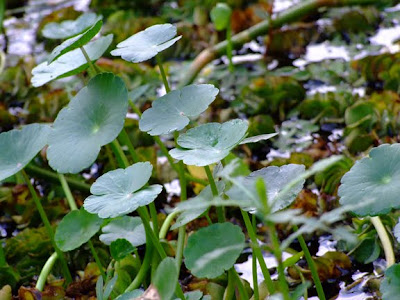 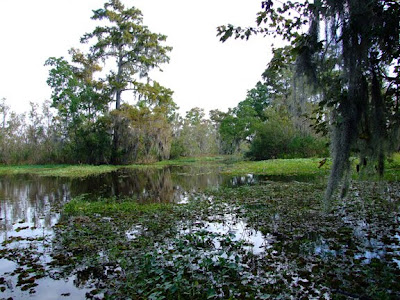 Hard to capture on film was the abundance of wildlife flitting about us, great blue herons and egrets silently ascending through the Spanish Moss, a few piles of baby gators sunning on cypress roots, golf ball size bumble bees bouncing upon lily pads (yet surprisingly few mosquitos! I got just one bite on my elbow the entire day). Our first large gator was a treat to discover (little did we know how many we would see). It was the first warm sunny day in some time, so the reclusive reptiles were out to catch some rays. 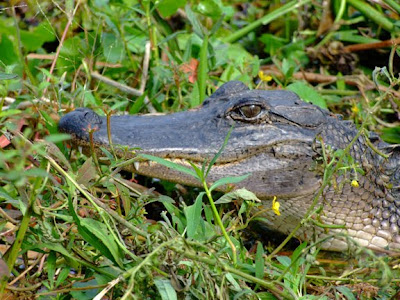 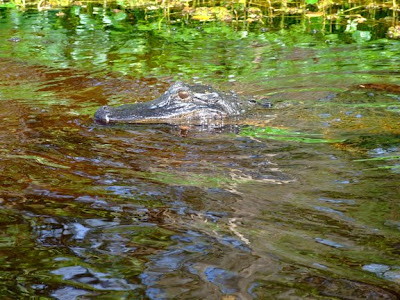 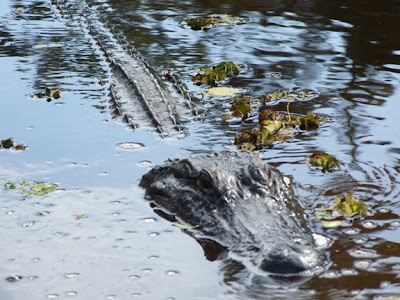 This BIG guy came this close - no zoom used here. Our guide (who'd grown up in these swamplands) fed him jumbo marshmallows and eventually got his head up, scratching under his chin. 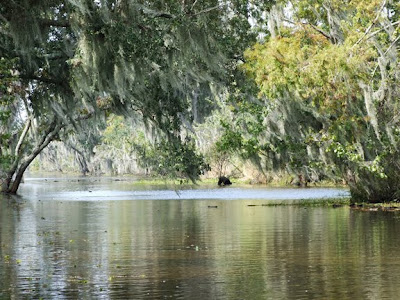 The beautiful two hour exploration was a blast, something I'd definitely recommend. I drew the line however back at the lobby when handed a menu for Gator Me Crazy, a cafe the swamp tour owners just opened in the French Quarter serving nothing but gator in all its forms, supposedly famous for something called the Swamp Roll. Hmm, no thanks! 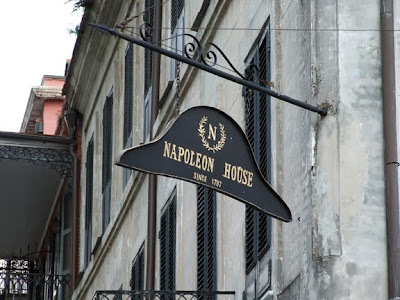 We got dropped off back in the Quarter, famished, so decided to grab a bite at the famous Napoleon House. 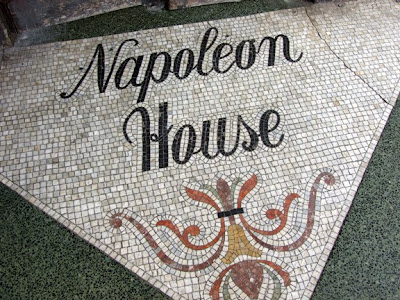 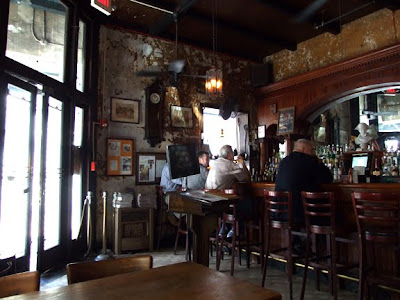 Housed in a historic landmark dating from 1797 and family owned since 1914, the history was omnipresent in this space. 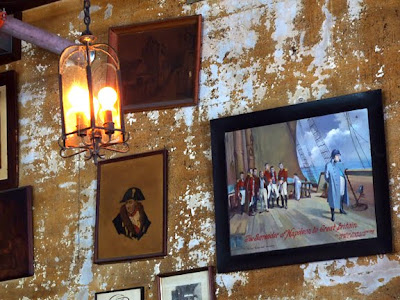 The two house specialties claimed on the menu here are the Pimm's Cup (a British cocktail of Pimm's No. 1 Cup, lemonade, splash of 7, cucumber garnish) and New Orleans' own Muffaletta. Naturally, I ordered one of each. 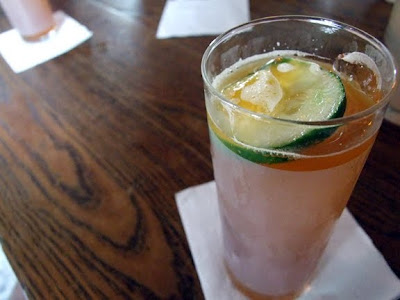 The crisp Pimm's Cup was well made, perfectly refreshing for a muggy day with a slight swamp sunburn. 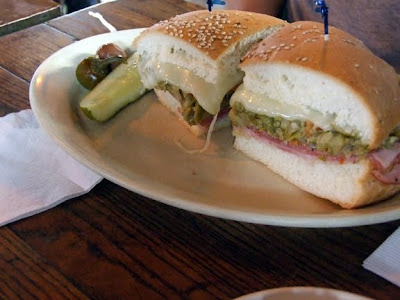 The Muffaletta was ENORMOUS. What you see here is half - thank goodness I had decided to share with Michael. Each of these quarters piled with ham, Genoa salami, pastrami, swiss cheese, provolone cheese, and housemade Italian olive salad was about the size of a large hamburger. The bread proved to be a bit much for me and I folded by the second half, scraping the olive salad out to finish. Tasty, but I decided then to try the "original" at Central Grocery before closing the Muffaletta book this trip. 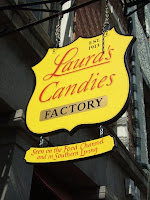 After lunch, we strolled a couple of blocks to Laura's Candies - New Orleans' oldest candy store and factory - that sells handmade chocolates, truffles, and of course pralines. The counter proudly displays their winsome pralines (pronounced praw-leens) with samples of the various flavors: maple, creamy, rum, chocolate, extra chewy, and of course the original (a 200 year old recipe). All were absolutely incredible, but I favored the rum, creamy, and original so got one of each - but to eat much later! 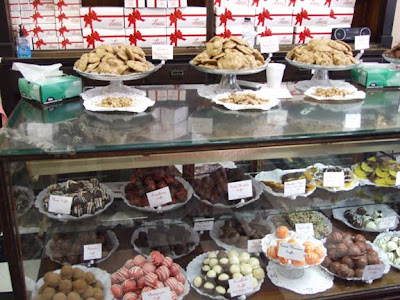 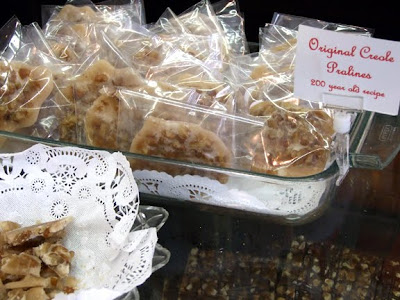 Sugar coma taking effect, the guys all decided it was nap time, but I was high on the city, so set off on my own for the first time, stopping in Rev Zombie's Voodoo Shop and Skully'z Recordz before wandering back. 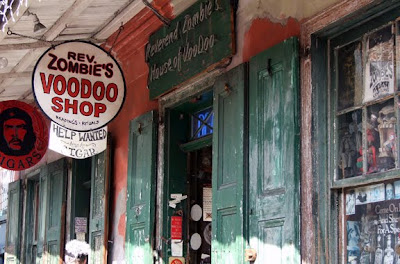 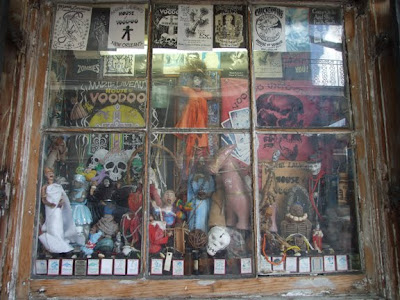 As the sun began to set I arrived back at the St. Philip to wash the swamp silt off and get ready for the first Halloween 26 benefit kick-off event.
The cocktail party was mainly a meet and greet/registration for the rest of the weekend, with a sassy lounge singer and silent auction for patrons. But I immediately gravitated to (well, first the open bar and then) the "Taste of New Orleans" court featuring small bites from several of the Quarters' most popular establishments.
I started with Broussard's corn, shrimp, and sweet potato bisque was heavenly - silky and spicy/sweet. Palace Café's rich Turtle Soup with fresh lemon and sherry was - well, for starters my first turtle soup ever - but multi-layered and incredibly decadent. I skipped the Muffaletta table because I was still digesting the bread from the one at lunch. And though I probably also wouldn't have approached the brownie table, a local tipped me off that I wouldn't regret it - They were from the Louisiana Pizza Kitchen, famous for this perfect moist, frosted brownie. Yum. 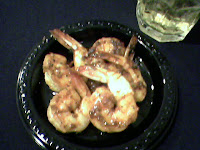 The table I went back to several times though (the belle of this ball) was sautéing fresh batches of fragrant brown-buttery BBQ Creole Shrimp courtesy of Ralph's On The Park. This absolutely flawless recipe actually made me want to urgently dine at Ralph's (alas we did not) or else buy the cookbook sitting beside the chafing dish. The woman tossing the shrimp informed me not to be fooled by the name and confuse this with your typical idea of "BBQ" - this quintessential New Orleans recipe is achieved mainly with LOTS of butter, Worcestershire sauce, and Creole seasoning. Divine!!!
Following the cocktail party was even more bourbon on Bourbon Street and the end of another magical day in my new favorite city.