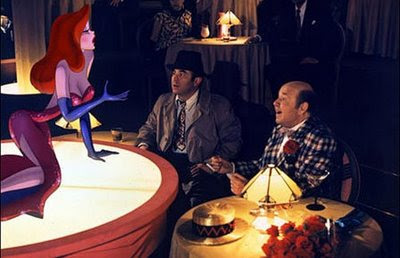 No, it's not the cartoon penguin-run club where Jessica Rabbit performs, but as the freshly opened Roger Room does not allow photography of any kind, I was forced to get creative.

Following the cocktail-centric Golden Era speakeasy trend, Jared Meisler and Sean MacPherson (Bar Lubitsch, Jones) hit the vibe nail on the head with The Roger Room. Neon fortune teller signs outside on the street hide a dark and cozy interior lit with dim table lamps, walls adorned with painted circus panels. The charm win is immediate.
We scored the last open booth and dove immediately into the colorful polka-dotted cocktail menu. A server approached, which is sadly when the scale already began to tip (note: I really don't like to pick on service in reviews.. unless it largely changes my relationship with the establishment, which at The Roger Room it did). Interrupting my friend Cara's order, he asked firmly for her ID (which we had just checked at the door as well). Confused but compliant, we did another round of ID checks, then she ordered. He then interrupted my other friend RC's order to state that he would require a credit card to hold, not to charge, just to hold. Un-phased, I handed him my card and we continued ordering. He repeated back our drink names several times, trying to remember them. A minute later he returned to clarify our drink orders again...
Immediately a round of water tumblers were brought, an unexpected nice touch for a serious cocktail bar. Another moment and our three attractive concoctions were delivered. RC's drink, the Japanese Maple (Yamazaki Scotch, pure maple syrup, lemon juice, egg white, crushed ice) was smokey and smooth, served up in a crystal-cut coupe. My Spiced Mule (Saylor Jerry Spiced Rum, ginger juice, lime juice, vanilla, nutmeg, cinnamon, club soda, rocks) was gingerrifically spicy and tart. Cara's pick The Four Aces was the winner of round one, Monopolowa vodka, fresh basil, green grapes, lime juice & Canton Ginger Liqueur on the rocks. Brisk and refreshing, the perfect cap for a warm sunny Los Angeles Saturday.
The pleasantly sparse room began to fill. The Hollywood types absent earlier began to filter through the heavy entry curtain in layering wafts of cologne. The giddy tinkering of tunes and upbeat conversation turned garishly loud and almost grating. Every other person to squeeze past our small booth bumped my drink-holding arm. At this juncture we debated drink #2... But decided to take advantage of our prime booth and stay for it.
This time I opted for the Scarlet Aperol Fizz (The Scarlet Ibis Rum, Aperol, lemon juice, egg white, crushed ice), which was sharp and fuzzy, interesting but overpowered by the bitterness of the Aperol. Cara's Spring Street (Effen Vodka, mint, orange juice, Galliano and crushed ice) was a crisp twist on a mojito. RC's simple Death In the Afternoon (Le Tourment Vert Absinthe & champagne) was the favorite this time, the round mousse of the sparkling wine a remarkable foil to the cloying anise of absinthe. Take note, Virgin America!
After some time, we could no longer hear each other across the table, so called for our check. A credit card slip came with the entire tab run on my card. I stopped the server on his way back around, reasonably asking him why he ran my card when he specifically said he was not going to. He responded quite snottily that I could just rip it up and pay however I wanted to then, and walked away. Note to servers.. running a card usually puts a hold for that amount on someone's card for several days.. it is not immediately canceled by "ripping up the receipt." The flippant way our server handled this was incredibly unnerving to me, and really just the cherry on his snooty demeanor all evening. At $13-14 per drink in such a lovely setting I expect better treatment (a la the Varnish). But I can not condemn a captain for one of his crew...
These small but pesky service issues aside, I very much enjoyed the ambiance of the space and the meticulously mixed menu. I do look forward to returning, the secret obviously to arrive early. One lovely service the bar offers is the ability to put your number down for a seat when at capacity, then once one becomes available, the bar will ring you.
Drinks from the list I look forward to trying in the future include the Old Sport (Cap Rock Gin, black tea-infused Soho lychee liqueur, cucumber juice, lime juice, up), the Thug (Maker’s Mark Bourbon, Baronjager Honey Liqueur, lemon juice and spicy habanero bitters on the rocks), and Flim Flam (gin, Cynar artichoke liqueur, Luxardo Maraschino, Sambuca Molinari).
Like any great Los Angeles secret, check it out now. You never can know what the future holds...