Vodka. Yes, that is the first thing to come to mind generally.
But I quickly learned that beer is actually consumed more in Russia than Smirnoff. And oddly my first proper drink in St. Petersburg was a pint in a basement Irish pub called Mollies, "The most popular Irish pub in town" (Rubinshteina str. #36. M: Vladimirskaya), skimming through guidebooks to the sounds of 80's Guns N Roses hits.. In the morning, no less! But perhaps that's what makes it all the more Russian of me.
You see, one of the first cultural anomalies I didn't expect in St. Petersburg was the 24-7 open container law. Everywhere on the street you see people walking with open beers, from morning deep into the night. Suited businessmen, students on break from class, senior citizens.. Everyone was picking up bottles from the handy kiosks outposted around the city, generally near subway entrances (where a beer costs about a buck or less). Markets have bottle openers out on the counters. The most popular brand is easily St. Petersburg-based Baltika (and second largest brewery in Europe, after Heineken).

Being a foreigner, I could immediately appreciate Baltika for it's calssification system - Each bottle is named simply with a number 0 through 10; 0 being non-alchoholic and 10 a 5.2% alcohol dark beer. Baltika 3 is the "Klassicheskoe" (Classic) pale beer that is about as commercially saturated in Russia as Budweiser here in America. It is a decent refreshing lager, but when I had the choice, I opted for the other common beer on tap, Carlsberg's Tuborg Green.

But nights galavanting along the Venetian-like canals and afternoon strolls with brewskies in the park aside, I too was more interested in the vodka. The options are limitless and available at even the smallest of markets. Design alone made it tough to choose, from gorgeous constructivist labels to fun kitschy bottles (Vodka Matryoshka). 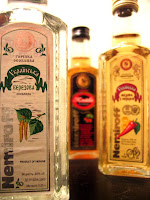 Flavored vodkas are not just a stateside bastardization I learned, popular flavors in Russia are cranberry, birch, and honey-pepper. I bought a few bottles to bring home, but was more intrigued by the cultural ritual of vodka-drinking. Vodka is more than a mere beverage option at bar - and it is a ritual, with strict rules and taboos associated with it. It is only taken straight, usually for one of three reasons: To celebrate, relax, or medicate. One book I read suggested that to blend in when dining in St. Petersburg restaurants, buy a bottle of vodka. Yes, an entire bottle. Russians commonly consume large amounts of vodka with meals (actually always with food - lots of it). This is actually to prevent one from becoming wasted at the dinner table (bear in mind also that a Russian meal may often last several hours). The vodka is chilled and often decanted, served with shooting glasses. Russians don't sip vodka, nor do they mix it. The most common accompaniment (or "chaser") are assorted pickled vegetables - What sangrita is to tequila. I can't stress enough how much superior these pickles are though - crisp cucumbers, peppers, cabbage and tomatoes with delicate seasoning, not as sour or vinegary as American pickles. Just perfect! 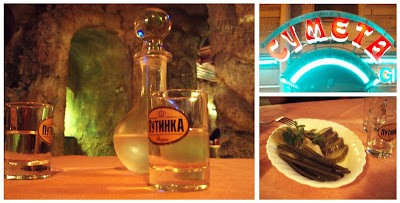 Traditionally in large groups, a drawn-out toast is expected before each shot.. followed by a resounding "Naz dyroovnia", or "Zah vsyo kharohshoyeh" ("May everything be good in your life"). Take a deep breath and shoot the vodka, breathe hard out of your mouth followed by a bite of food. Eat more, enjoy company, and repeat! I have to say, adhering strictly to these rules produced the most enjoyable meal and evening of the trip! Also, never set an empty vodka bottle on the table - It is bad luck! Place your empties on the floor..
Russians often take snacks with their beer as well.. the most common is comprised of rye bread croutes covered in garlic, oil and cheese and baked until warm and tasty!
I only made it out to the weekend bar circuit one night in St. Petersburg's Historic heart, and walking down the crowded street beer-in-hand found our first English-speaking comrades. An Israeli man and son out looking for a good place to drink stopped us on a corner hearing our English banter (and shocked to learn we could drink in public). We were en route to Fidel (9 Dumskaya Ulitsa. M: Nevsky Prospekt), a 'cozy' indie-disco bar launched by Anton Belyankin (the bassist of local ska band Dva Samaliota) which shares a crowded block with Datscha (next door, which Belyankin also once co-ran) and several other rowdy dives. We had trouble even fitting inside the door at Fidel, which was packed so tight, the dancefloor at the far end -barely visible through the cigarette smoke- was moving about as much as the kids trying to make their way up to the bar for a drink. As I wedged my way forward to order a round for us and our Israeli friends, a couple of locals caught ear of my English and turned their glazed sights on me. A friendly tall dude with a moustache, long hair and a leather jacket stumbled through a few lines of English asking where I was from. "USA, LA..." I said realizing I should have said "Vancouver". His (obviously more inebriated) friend then turned and started howling something about "George W" and "Condoleezza Rice" with a firm pat on the shoulder. I rolled my eyes in exaggerated agreement, fending off his political remarks for several minutes before giving a thumbs up and saying "Putin" with a grin, and disappearing back into the crowd with our drinks.
I preferred the quiet watering holes we happened upon, Like Ay-y!, a contempo woodsy lodge serving traditional Russian cuisine and Tuborg Green on tap. Ksenya and I had a lovely happy hour brew and shared a small clay pot of dumplings there one afternoon after antiquing. Looking around the piney room I couldn't help but think of my alma mater Doug Fir in Portland...

Saint Petersburg's metro is the second largest underground railway system in Russia and arguably the cheapest and most effective way to get around the city. The trains are fast and run frequently (during rush hours, intervals go as low as 30 seconds between trains). The metro costs about 70 cents per entry. Everything is in Cyrillic however, so sometimes "counting the stops" to your destination is required. After the last subway run each night at midnight (boo), the 24 hour markets are where the action was. We'd generally grab a couple more beers, a snack, some more cranberry candies, some Дюшес (Dushes - a lemony pear flavored soda), and ogle at the weird products on the shelf like tallboys of Gordon's Gin & Tonic and "Sparkling Strawberry Martinis". 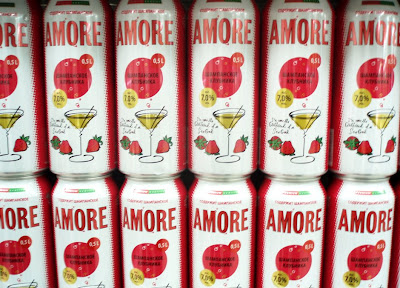 My favorite new discovery is квас (kvass), a mildly alchoholic drink made from fermented rye bread, yeast or berries. Kvass is also a main ingredient in окрощка (Okroshka), a traditional cold cucumber soup. As a beverage, it is generally served room temperature in a mug, and made in-house at many traditional Russian restaurants. The kvass I had at Detinets Restaurant (Kremlin, Pokrovskaya Tower, Novgorod Tel: 816-227-4624) was mildly sweet, earthy and tart.. Like warm ginger beer spiked with malt liquor. Detinets is also known for their Медовуха (Medovukha = mead), a honey alcoholic drink also brewed in the restaurant.
On our last night, we stopped into an English-style pub down the street from Katya's apartment called James Cook (45 Kamenoostrovsky prospect Tel: 812-347-6581 M: Petrogradskaya), and sat in the back room where a handsome jazz band was setting up. We ordered tall pints of amber ale and a bowl of rye beer snacks, and what impressed me most was that our waitress was able to understand my butchered Russian, over the music, and with a smile. By the time we finished our dinner, we realized it was past midnight.. But something gave me the impression the night was not yet over. I wondered if Katya had another bottle of red wine waiting on the table back home, ready for our most common drinking ritual of all.. a few nightly glasses around the table.

Next: Departing... Withdrawl and cultural discovery on home turf. 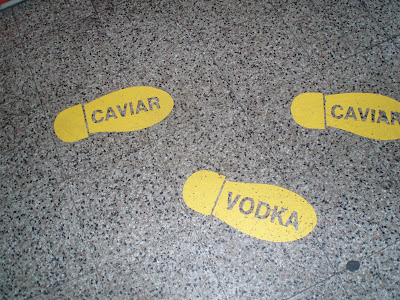