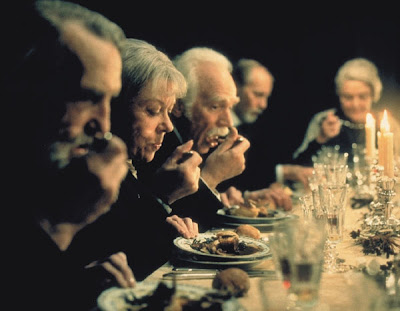 This Friday 1/9, The French Laundry's metropolitan sibling Per Se is recreating the famous indulgent meal from the climax of the 1987 Danish film Babette's Feast for A-list NYC diners (at $3,500 per person they'd have to be - I hear Martha Stewart will be in attendance).
The post about it on Tasting Table caught me by surprise.. For two reasons. One, Babette's Feast was the first foreign film I ever saw, with my parents when I was probably all of 10. I remember salivating when Babette, the Parisian chef in hiding finally served the bleak Danish townsfolk her marvelous [and sinful] meal. So the other day at Amoeba when I saw a used copy of the film I couldn't resist revisiting a classic. The second reason the timing is bizarre, just LAST NIGHT I finally picked up the memoir "Service Included: Four-Star Secrets of an Eavesdropping Waiter" by Phoebe Damrosch which I bought a month or so ago, which documents the misadventures of the first female captain at one of New York Citys most prestigious restaurants, Per Se...
If you do happen to have $3,500 handy, here's the info on the dinner: 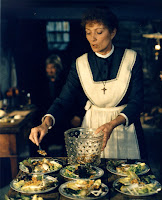 Friday, 1/9
6 p.m.
Babette's Feast at Per Se
In what might be the most expensive dinner-and-a-movie ever, Per Se will screen the famous food-lover's film, then re-create the movie's decadent feast. The admission price ($3,500 a person or $6,000 for two) benefits the Allow Theater Company.
Per Se, 10 Columbus Circle; http://www.alloytheater.org/ or call 917-319-8109 for tickets
[via Tasting Table]
Posted by Nathan Hazard

Email ThisBlogThis!Share to TwitterShare to FacebookShare to Pinterest
Labels: Per Se, Tasting Table