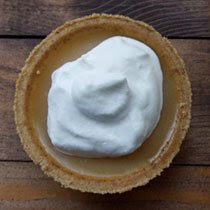 Could it be true? A revival of solid booze?
Bless Tasting Table New York and NY Times for tipping me off on this trendy new movement. But we're not talking your average dimestore jell-o shot.. From absinthe-flavored gummi bears and Ramos gin fizz mashmallows (Eben Freeman of Tailor's "Solids") to strawberry-flavored vodka and Chambord jam on warm baguette ("French Toast" by Thierry Hernandez of Benoit) I would say the emerging examples raise the bar a notch. Or three.

The best part? Here's a recipe for you to attempt the much-lauded Pumpkin Pie Shot concocted by Eric Hara of davidburke & donatella - just in time for Thanksgiving! I'm definitely trying it.. Let's swap notes after the holiday on whose grandma got more wasted!

1. Arrange the piecrusts on a baking sheet. Place 1 cup cold water in the top of a double boiler and sprinkle the gelatin over the top. Let stand for three minutes.
2. Heat the gelatin mixture over a gentle simmer until the granules have dissolved. Add the pumpkin, sugar and spices and heat, stirring occasionally, until the pumpkin and sugar are completely melted. Remove from heat and cool for 30 minutes.
3. In a medium bowl, combine the vodka with 1/4 cup cold water and the heavy cream. Whisk in the pumpkin mixture and immediately divide it among the piecrusts. Chill until firm, at least 4 hours. Slice the pies into wedges, if desired, top with whipped cream and serve.
Posted by Nathan Hazard