Voyager Bien: When In Leningrad 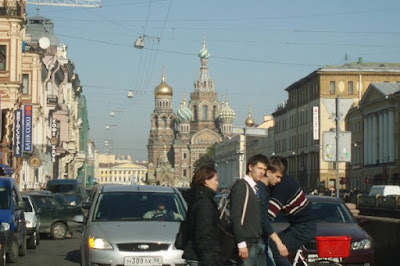 "You have to come to St. Petersburg with me," Ksenya said sensing my dubious demeanor, then with a tone of assurance, "It will be life-changing."
I had known about her trip for less than a week. It was hardly the sort of thing I agreed to on random Tuesday evenings. But somewhere in that moment, the conservative in me set down the paring knife I was rinsing in the sink and shifted my phone to the other ear.
"OK." I felt my cheeks burn a bit as I said it. "I'll look into flights and renewing my passport tomorrow."
I am constantly trying to figure out why as a student and young adult I never took advantage of the welcoming world outside of the states' lines. For some reason I've always convinced myself that I have too much going on at home, too many responsibilties, or that it cost too much. I had been abroad exactly once, in 1996 on a school orchestra trip to the Austrian Alps. Never since. After tea with a few people considering my Russian whim, I realized that this was conservatism I was actively putting upon myself. I saw the rare opportunity to travel somewhere like Russia with a native and see the culture from the inside.. and thus gave the bird to my sparkling credit and opened a new card to slap the airfare onto.
Less than a month later, I was landing at the St. Petersburg Airport (thankful a coworker had warned me of the bleak communist architecture of the uninviting fortress). Worth noting that Finnair was an incredibly affordable flight from New York by way of Helsinki, I would fly them again (very important note: complimentary bottomless Finnish beer, wine and sparkling wine throughout entire flight). My friend Ksenya, also to be my communication backbone while in Russia, was in the city finishing up a typeface conference, so getting through immigration and finding a cab to her hotel was my first challenge. Sounds easy enough? I learned quickly that hardly a word of English was spoken in or around the airport. The taxi numbers I called, even after butchering a few Russian phrases, responded only with further questions I couldn't understand or "Nyet". The sharks outside (half with taxis, half with their own cars) spoke a word or two, but only enough to let you know they'd take you to the city for 5 times what I was told it should cost. I knew I had to drop the vulnerable tourist countenance quick. I went back inside the airport, bundled up in my coat, scarf and tweed cap, reviewed a few key lines to negotiate the taxi and went back out, eventually convincing a more compliant dude to take my price and drive me into the city. As he weaved around cars in single lanes at lightning speeds past the lúkovichnaya glava (onion dome) church and super-store dotted countryside, I counted my blessings and knew already that Ksenya had been right. As the Church of the Savior on Spilled Blood appeared casually between the set-like building facades of Nevskiy Prospekt it was cemented. This was the beginning of an adventure I wouldn't soon forget. 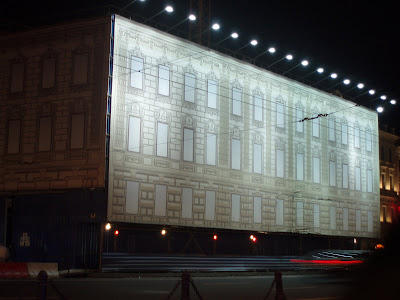