Is it already that time again? Nothing like a Mixology Monday cocktail recipe challenge to shake things up!
This month's theme comes from Scott Diaz of Shake, Strain & Sip, challenging the pretense of today's über-craft bar scene:
"The evolution of the cocktail has been a wondrous, and sometimes, frightful journey... But with all this focus on 'craft' ingredients and classic tools & form, it seems we have become somewhat pretentious... As such, this month's MxMo LXXI theme, From Crass to Craft, will focus on concocting a craft cocktail worthy of not only MxMo but any trendy bar, using dubious and otherwise shunned ingredients to sprout forth a craft cocktail that no one could deny is anything less." 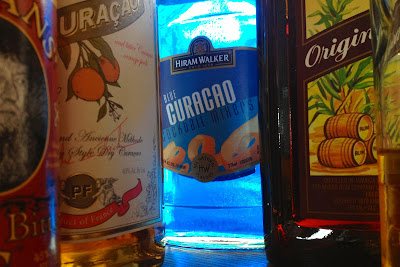 In the back of every liquor cabinet lives a dark secret. It is usually very old, always sticky to the touch, and often times... Blue. Oh yes. Blue Curaçao. More commonly found in the tenure of tiki-philes like myself,  the blue devil still causes a blush (or excuse) upon discovery. Unfortunate really, as the liqueur flavored with the dried peel of the laraha citrus fruit, from the island of Curaçao, is not completely untasteful. Yet it is often unnecessarily dyed the most unnatural shade of blue. Craft? We'll see... 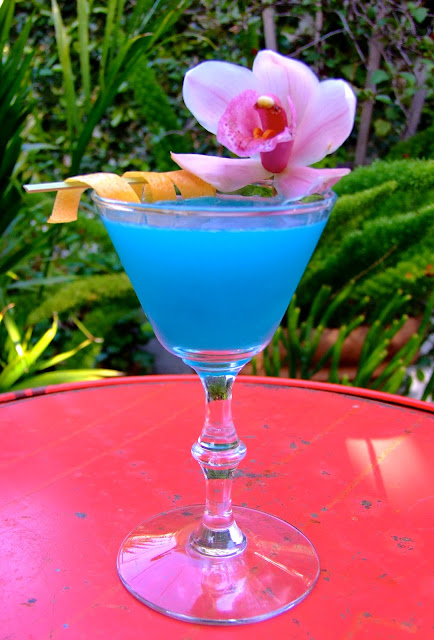 Burma's Pegu Club, set just outside of Rangoon (now Yangon, Myanmar), is probably best remembered by its legacy, the Pegu Club Cocktail. This ginny signature drink was sipped by its exclusive ex-pat members, mostly wealthy businessmen and military officials, as far back as 1866. First printed in "Barflies and Cocktails" by Harry McElhone in 1927, the recipe has only more recently resurged from obsolescence in Myanmar, now served in several historic colonial hotels in Yangon, as well as on the Road to Mandalay, an Orient Express cruise boat on the Irrawaddy River.

The latter is the namesake for my cerulean adaptation (the original Pegu Club calls for unvaried Curaçao). And given the fact that the cocktail was originally named after the Pegu River, I actually find blue befitting for the cocktail.

Add all ingredients to a shaker, fill with ice, and shake well.
Strain into a chilled coupe. If desired, garnish with a grapefruit peel.

A tart refreshing cocktail best sipped out of doors, there is hardly a cloying note to be found. Lick it up, haters. Lick. It. Up.

Thank you Scott for an entertaining Mixology Monday challenge! Check out the round up of submissions here, and visit the original MxMo LXXI announcement post here.
Posted by Nathan Hazard