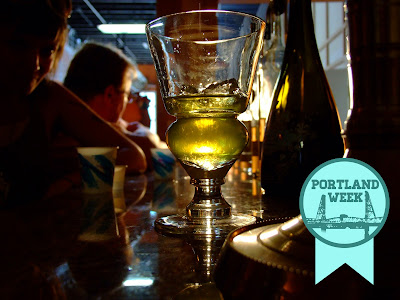 Portland is pretty sly.
Disguised as a sleepy town, the artisans there are often, sneakily, a few steps ahead. Especially in the booze department.
Let's not forget the liquid treasure produced by the vineyard-filled Oregon valleys surrounding Portland that shook up the American wine world, or where the craft beer movement established a formidable foundation.
Several years back, I visited Clear Creek Distillery in industrial NW Portland, at the time a refreshingly anomalous producer of eaux de vie, grappa and wine brandy. Nowadays, Portland has so many craft distilleries that they have their own district deemed Distillery Row and a passport to guide you through it. Clearly this is not something I would pass by. Listen up. 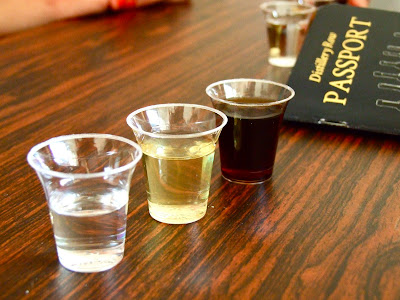 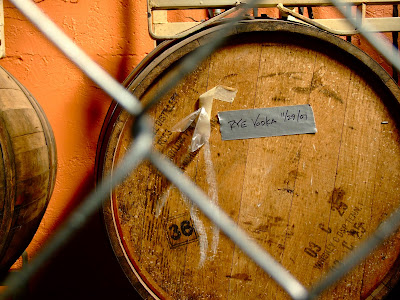 Aware that intoxication was a fair prediction for the afternoon, I opted for the distilleries within walking distance of each other. Unfortunately, due to tasting hours as well, that ruled out Stone Barn Brandyworks in SE's Brooklyn neighborhood. (Alas, something to look forward to for next time.)
And so we started out at Integrity Spirits, ready for the first stamp in our adorable passport (which cost $20, and waives tasting fees at all distilleries on the self-guided tour). 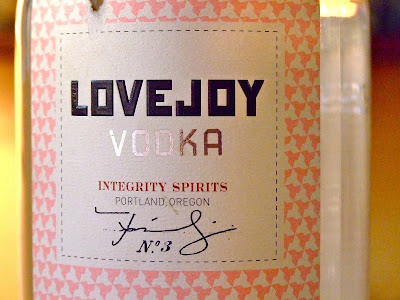 I was familiar with Integrity's Lovejoy Vodka, a beautifully designed bottle housing a lightly viscous vodka with hints of chamomile. Yummy. 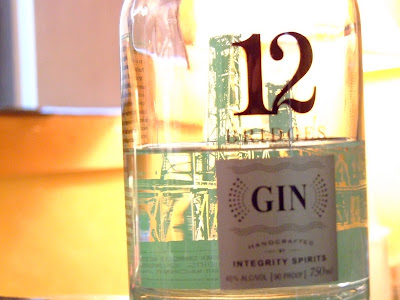 The 12 Bridges Gin was my favorite, with a bright blend of herbs and spices reminiscent of Hendrick's (light juniper and that hint of cucumber). 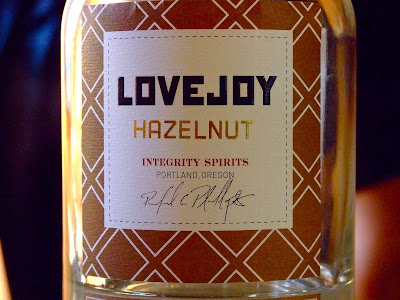 The Hazelnut Vodka was a nutty punch to the palate, super tasty and roasty. Almost Nutella-like with cocoa character. 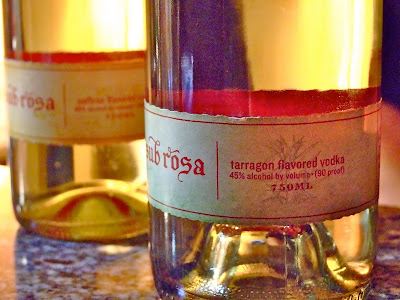 Next we sampled two batches of infused vodkas under the Sub Rosa label. The Tarragon was fresh and vegetal with licorice and pepper notes (a fun booze for cooking). The bright yellow Saffron was complex with lemony coriander, cumin, and pepper notes. 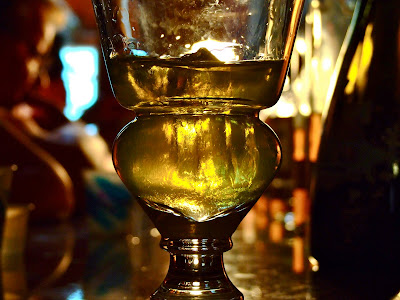 Integrity is famous for their Trillium Absinthe Supèrieure, Oregon’s first absinthe and one of the first in the US after it became legal. The 120 proof absinthe is intended to be diluted and sweetened per traditional ritual, which we prepared during the tasting. The result was one of the smoothest, most palatable absinthes I've enjoyed. 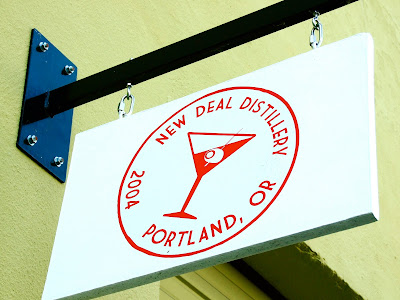 Next up was New Deal Distillery down the street. Known for their vodka, I was most impressed with the range of product New Deal presented. All exceptionally well-executed. 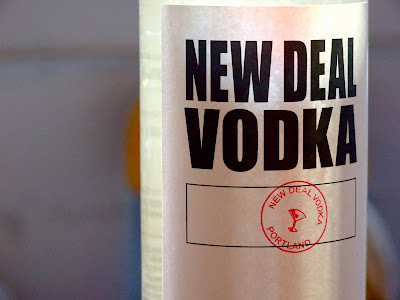 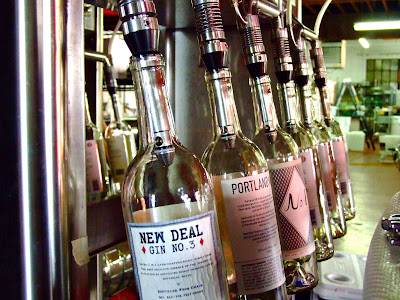 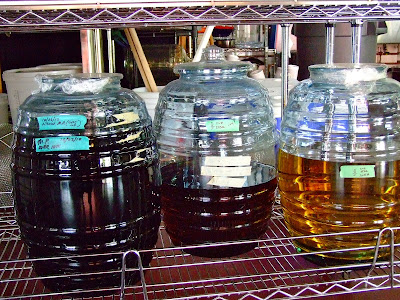 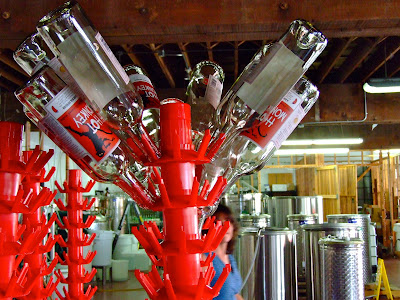 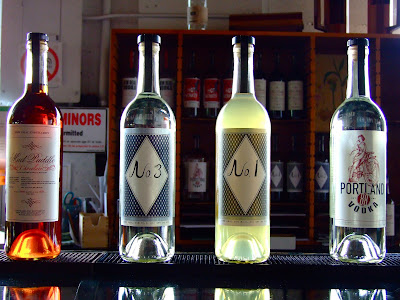 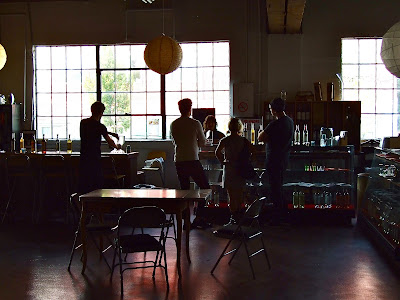 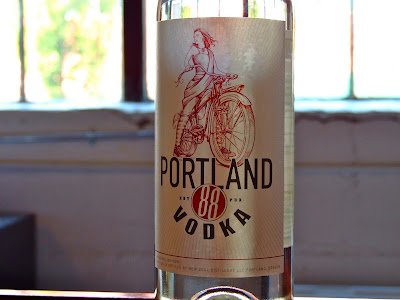 I was startled by the drinkability of New Deal Vodka. Smooth "sipping vodka" with clean botanicals and an easy finish. Even the 88, a traditional vodka distilled in copper stills, bottled at 88 proof. A piece of cake! A delicious piece of cake. 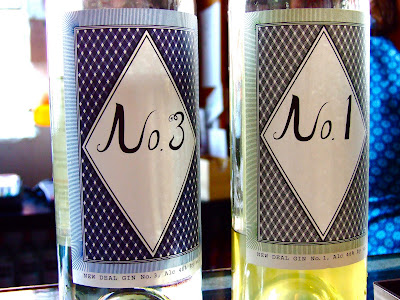 I got really excited when we moved to the handsome Gin No. 1 and Gin No. 3. A study for purists, these are two very different gins using juniper as the sole botanical. The first is a less-refined early-Dutch-style gin, cloudy, lightly yellow, and viscous. This is not a mixing gin, it is meant to be sipped neat and enjoyed. The latter, Gin No. 3 is bright and complex, shocking such a melange of flavors (pine, mint, citrus) could come purely from juniper berries. Absolutely delectable. This was a gin I needed to own (and do). 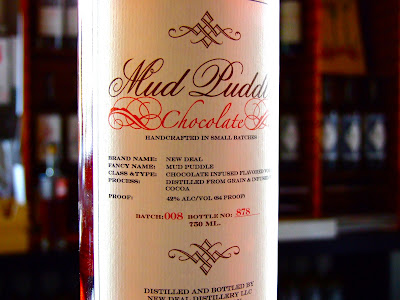 We tasted a lovely coffee liqueur and new ginger liqueur, but both were eclipsed by the Mud Puddle. Unlike most cloying chocolate-flavored liqueurs, here cacao is added to this spirit prior to distillation for a dry and subtle, rich after-dinner treat.
The brave of us finished off the tasting with a fiery shot of Hot Monkey, a piquant blend of five Southwestern chili peppers, lending just enough heat to keep you wanting more. Forget the bloody mary, this stuff is great on its own or with a splash of tropical fruit juice. 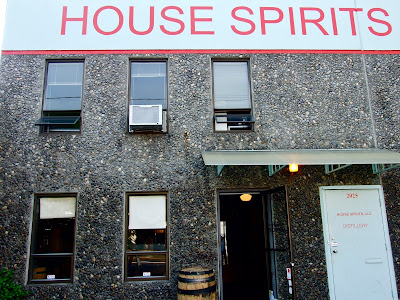 Overall I was most excited for our visit to House Spirits, which was the perfect place to finish off the increasingly galvanizing day. 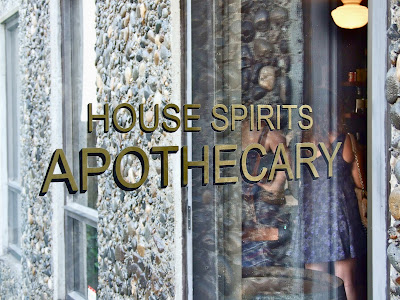 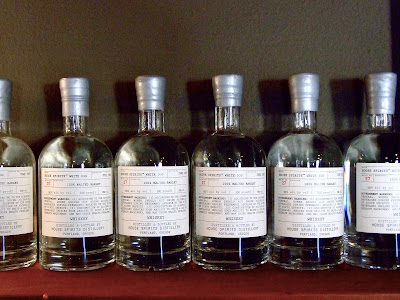 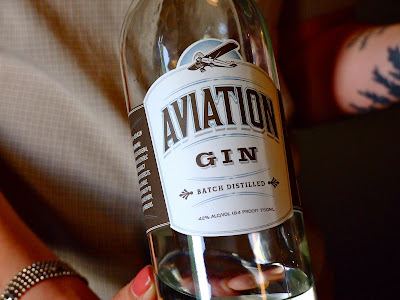 Known for their Aviation Gin, the owners at House Spirits were more like hosts, and us their guests. They offered Aviation and Fever Tree tonics as we perused the shop before diving into the tasting. Their famous full-bodied, Dutch-style recipe blends juniper, cardamom, coriander, lavender, anise seed, sarsaparilla and dried sweet orange peel. This stuff is major. 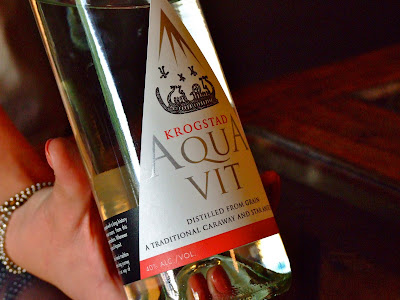 A growing star among the ranks at House Spirits is their Krogstad Aquavit, an invigorating take on the traditional Scandinavian spirit lightly spiced with star anise and caraway seed. A chilled glass will warm even your winteriest nights! 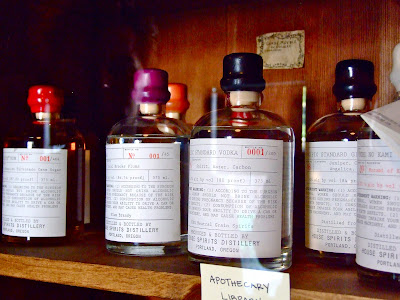 We quickly moved to the big guns, the Limited Release Line. These small-batch specialty stunners range in production from a few cases to a few pallets, each apothecary bottle numbered. 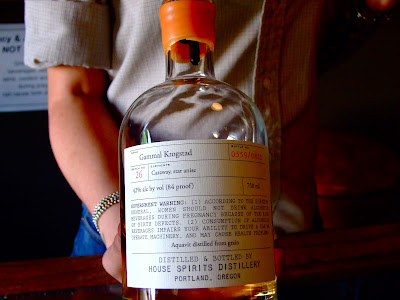 We got to check out Gammal Krogstad, a barrel-aged version of the previous Aquavit, rested for 10 month in 3 barrels (a 53 gallon House Spirits whiskey barrel and two 30 gallon used House Spirits rum barrels). The blend of the three produced a honeyed grandfather to the crisp Aquavit, with deep amber resonant notes. 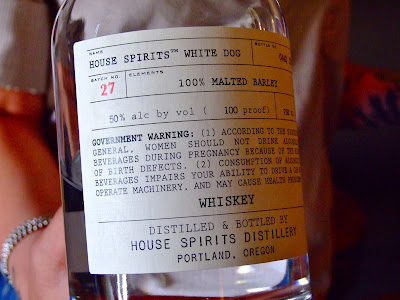 Then we tried the White Dog.
House Spirits White Dog un-aged whiskey (50% abv) is made from 100% malted barley and Oregon Bull Run water. Unlike moonshine, White Dog starts big and rich, with a malty nose, chewy mouthfeel, and insanely disparate flavors from white pepper to lemon peel, flower petal to Halloween candy. I shouted "WHOA" when I took my first taste, and "more?" after my second. This was my trophy bottle of the day, and if you can find it, recommend you buy it at once. You won't be sorry.

So yeah, we were pretty tanked by the end of the day. But all the better for wandering into random rose garden picnics.
I love you, Portland. Thank you for being so good to me. Until next time...