I've never been so excited about a guest post! Get ready to fall in love with latent (closet?) food writer Kristin Smith and the Case of the Great Pączki!
-Nathan 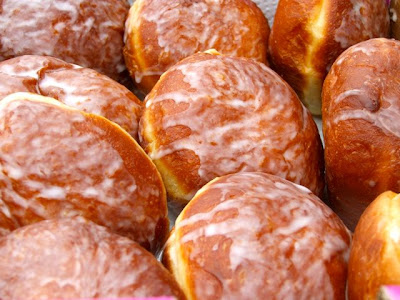 To all my friends and associates now deep within their period of Lenten sacrifice, let me take you back to a time when the roads were paved with candy and the rivers ran with wine (or so your sugar-withdrawal hallucinations may lead you to remember.) Long, long ago…three weeks ago to be exact, when I began a small but exciting journey to join the global brotherhood of overindulgence called Fat Tuesday.
Though the real holy business is a few weeks away, Fat Tuesday is a high holiday in the world of food. Medieval Christians had to utilize all their eggs, butter and milk on this day, as each was strictly forbidden during Lent. And though modern living has for the large part relaxed the grip of such religious regulatin’, the resulting day-of-dessert has remained unchanged as the centuries went by – not surprisingly. Instruments of pure fun tend to weather the test of time: sweets…sex…dancing…jet skis.
Around the world, bakers unveil time-honored and sugar-coated treats to celebrate Fat Tuesday. It’s a day a confectionary mayhem worldwide, when flour is spun into one-night-only decadence. Pastries gone wild, if you will. Swedes celebrate with semla, a cardamom-spiced wheat bun, scooped out and filled with a mix of bread crumbs, milk and almond paste, topped with whipped cream and powdered sugar. Cue mouth-watering. Finns and Danes make Fastelavnsbolle, a puff pastry filled with whipped cream, and topped with chocolate icing. Brits are a little simpler, but no less fantastic, with a nationwide “Pancake Day” on Fat Tuesday. And let’s not forget King Cake, proof that when Catholicism finds the kitchen, things can sometimes get a little weird.
But it’s our friends from Poland that started me on my own sugary journey this month. My dear boyfriend Chris is a native of Detroit, where Fat Tuesday is often called Pączki Day (pronounced punch-key, which I can’t help but say in the voice of a strange Pokeman soprano.) A pączek is sphere of dough, deep-fried and filled with fruit preserves or custard. Pączki are usually covered with powdered sugar, icing or bits of dried orange zest. And then eaten. Quickly and without regard to table manners.
Pączki Day is very popular in metro Detroit and areas around the Midwest where large Polish communities live. And being from a small town in Georgia, I had never heard of such a pastry until I met Chris and experienced his annual complaint of not being able to find a pączek in Los Angeles.
When this complaint surfaced yet again in 2011, I thought –as my know-it-all self is wont to do – “Surely, you can’t be looking hard enough.” We live in Los Angeles! A melting pot of every culture of the world! How could you NOT find this silly little jelly doughnut? (Pro Tip: Do not call pączek a jelly doughnut to anyone who is familiar with Pączki. You will be chastised.) Also – we have the mighty Internet on our side! These. Pączki. Can’t. Hide.
It just so happened on Fat Tuesday 2011, I was home sick with a cough and an edict from our corporate leadership to not come into work when ill (our office is basically a sanatorium from November through March.) After a few hours of boredom while I “worked from home”, I decided I would prove Chris wrong and find this mythical pastry and surprise him with a taste of home.
Time elapsed: Two hours.
No luck. Warsawa in Santa Monica? Nope. Polka in Eagle Rock? Surely you jest. A variety of Russian bakeries? “We’re Russian, not Polish.” I was growing desperate, when I found six year old Chowhound post stating that I could find what I was looking for in an old folks home in West Adams. What?!
Said scrapirony on Feb 13, 2005 08:18PM:


If you want a great pączki, you can find it not at the Polish Parish on West Adams but at the Polish old folks' home next door. As you're facing the church (3424 W. Adams Blvd.), go into the driveway immediately east of the property (not the church lot). There's a small sign with a single Polish word that starts with an S (forgive me, I was in a donut daze and can't remember much beyond the pączki). Go through the parking lot and in the front door. Trays of big fat pączki, beautifully brown and filled with prune butter (sprinkled with powdered sugar upon request), will be right in front of you. $1 each. A Chowhound posting from Nov. 2002 said they're only available on Sunday between 9 a.m. and 1 p.m., but I'm not sure if that's true -- the Polish American lady who told me where to go said they served them "all the time." Just to be safe, though, go on Sunday because you can get a 3-course lunch at the Polish church for $8.

Excuse me, a 6 year old Chowhound posting based on a 9 year old posting.
Adventure time! I put on my shoes, got on the 10 and arrived in West Adams to find exactly what he described --- a small, one story building behind a tall fence with a tiny red sign in Polish. 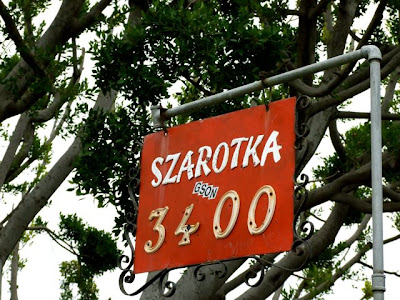 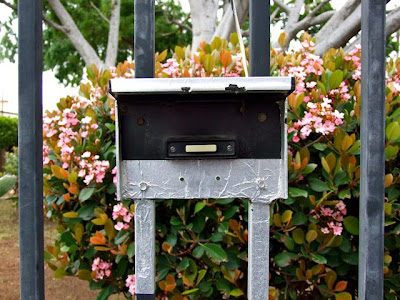 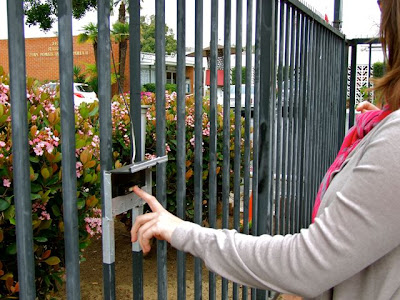 As soon as I rang the doorbell on the gate, I panicked – what am I DOING?! It’s 2 PM on a Tuesday and I am demanding entry to a retirement center to ask for food. Before I could run away, the gate opened and a woman looked at me quizzically from the parking lot. “Punch-key?” I asked meekly.
“Come back Saturday.”
I was too nervous to ask any questions, so I thanked her and headed home, thrilled that I had found the elusive treat…kind of.
I enlisted Chris and the lovely Nathan to accompany me on my return trip Saturday morning. We arrived timidly at 10 AM and waited for the gate to open again. A man led us down a long hallway, part hospital, part Polish banquet hall. 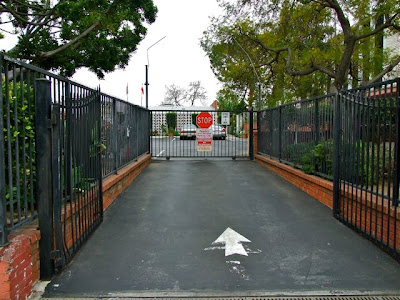 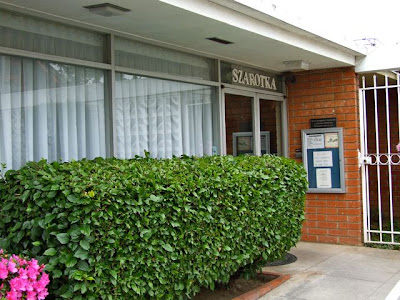 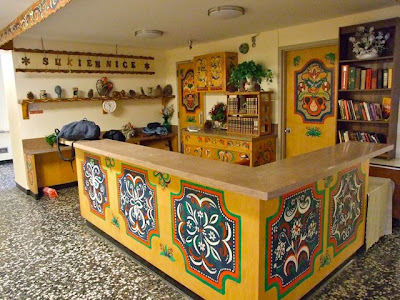 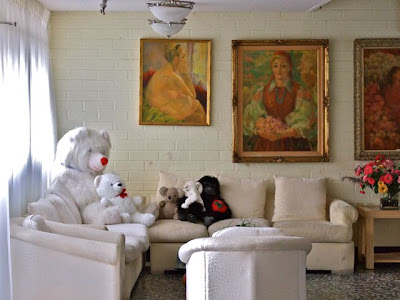 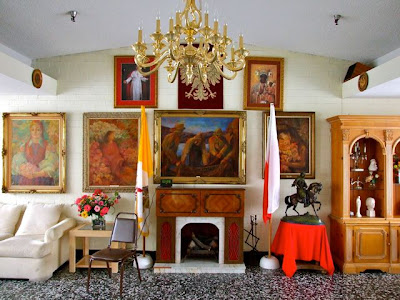 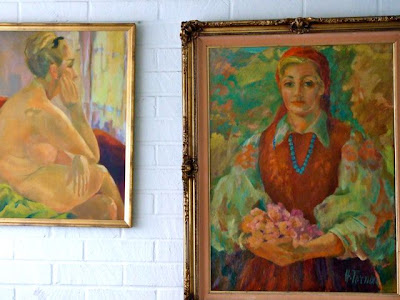 We were asked how many we wanted (10 at $1.50 each – what a steal!) and we instructed to wait outside the kitchen. As the kitchen doors swooshed back and forth, we caught sight of older ladies preparing the day’s treat, with hair tied up in kerchiefs, backed by trays and trays of dough. We waited patiently (and me nosily, as I explored the dining hall’s dried flower centerpieces and Pope John Paul II wall hangings) until out came a box of 10 freshly glazed paczki. 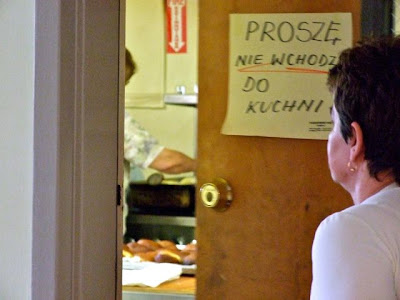 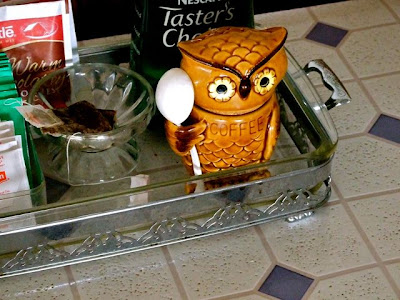 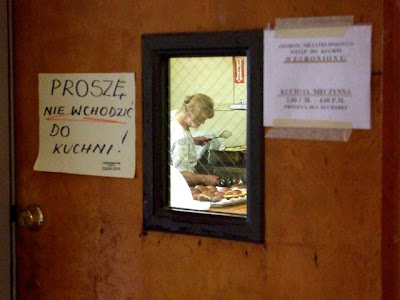 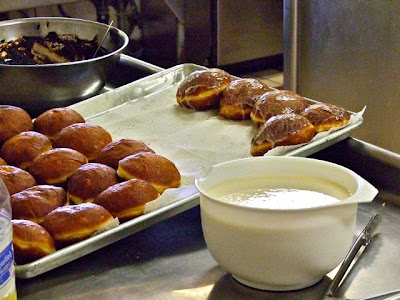 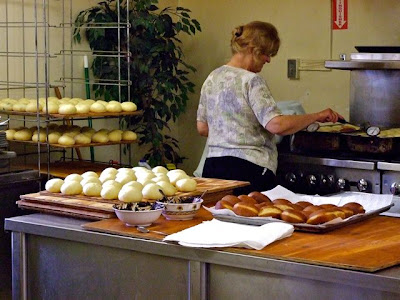 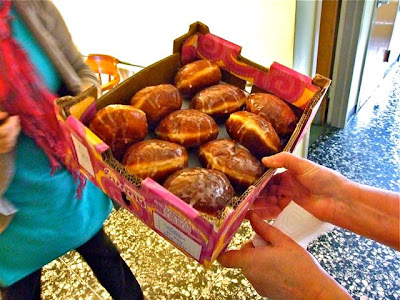 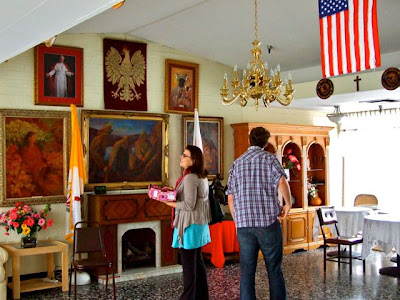 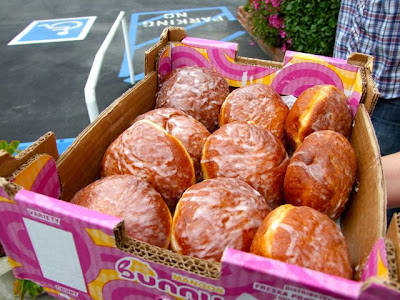 We said goodbye to our brief encounter with Polska, got out to the parking lot and immediately dove in. I missed out on the filling during my first bite – it tasted of the warm yeast rolls my grandmother used to make. Except covered in a layer of sweet frosting. Ding! The next bite introduced the filling – very old world, very old folks home: prune! And while I would usually turn my nose up at prune preserves, it was tangy and rich – a perfect complement to the mellow doughnut and the sticky sweet frosting. 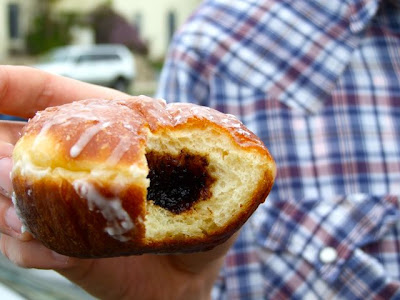 Five quick bites later, I finally knew what Chris was talking about when he fondly spoke of Pączki Day. And a few hours later, I was delivering pączki to a friend from Toledo, who was giddy to re-live a childhood tradition. And now a few weeks later, I am craving another pączek, but I’ll have to wait until next year – maybe by then, we’ll have figured out a way to import pastries from Detroit, and I can leave those nice old folks alone!

When not exposing the greatest abominations of our age ("German Chocolate Cake has nothing to do with Germany. AT ALL!"), Kristin can be found musing over dessert pizzas passed, stalking J Gold on Twitter, keeping a Journal of Pants, and generally making the world a funnier place.
Posted by Nathan Hazard