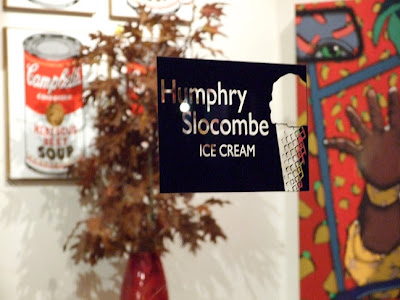 And then one day everything changed.

I began following Humphry Slocombe on Twitter, well, because the voice and vision intrigued me. How could it not? With ice cream and sorbet flavor announcements such as Jesus Juice (red wine and Coke) and Elvis, the Fat Years (banana ice cream with bacon peanut brittle) the balance of whimsy and mouth watering possibility seemed endless. While several local LA institutions such as Scoops have opened doors wide for ice cream play, something about this Humphry Slocombe "character", sense of humor, and -pardon me- balls surpassed its contemporaries. Finally after months of tweet lust, I was visiting the little Mission shop of my dreams. It was nearing closing time and Humphry Slocombe was warm inside, the aroma of baking berry crisp thick in the air. The cream mongers smiled, rolling their heads back toward the prep area. "Pastries for the morning," they explained, clearly noticing my eyes widen and nose lift in the air.

The case holds about 12 flavors at a time, which rotate regularly. Several in the case included other SF local favorites, such as Boccolone Prosciutto and Blue Bottle Vietnamese Coffee. I tasted the prosciutto first, creamy and not overly sweet, with a soft pleasant pigginess. The Pumpkin Seed and Black Sesame were both appropriately nutty and robust. After several tastes I became too shy to push it, and went without trying the Jesus Juice (sigh). 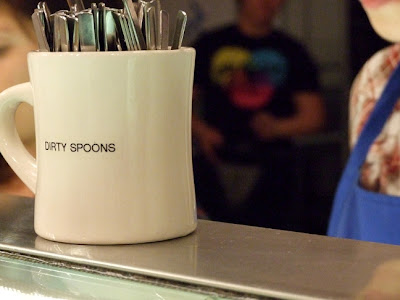 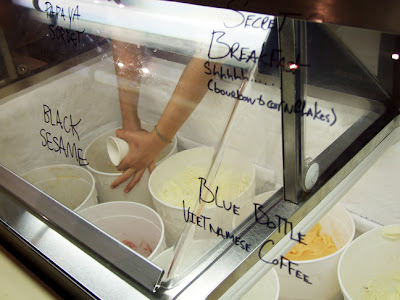 Double scoop it was - the no-brainer was their signature Secret Breakfast (bourbon & cornflakes). I boldly chose the un-tested Salted Licorice for its mate and prayed for success. While the first bite of Secret Breakfast wooed me with liquor and mellow cereality, after tasting the electric licorice it ceased to hold up. Fireworks accompanied this salted licorice - intense smokiness, tang, and creamy framing made it a near perfect flavor in my mind. I looked helplessly around for a small corner big enough to sleep in, maybe dwell with few belongings. I couldn't fathom leaving here. How could I go on a usual life after this? Another sigh, a wave to the smiley mongers and we were off into the dark. 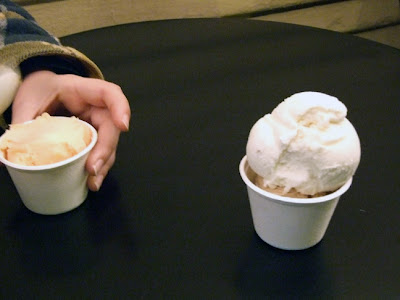