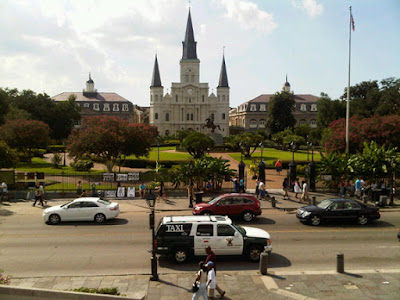 99 degrees and 99% humidity. Just another August morning in the Big Easy.
My belly was full from Jazz Brunch and I had but a few hours left to run around town and check the remaining tasks off my list. 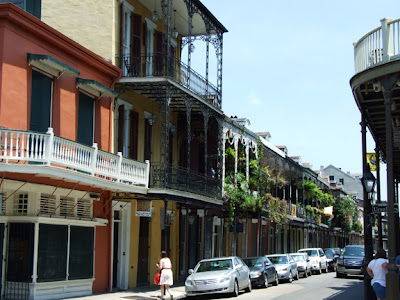 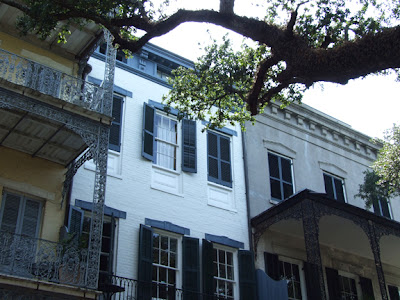 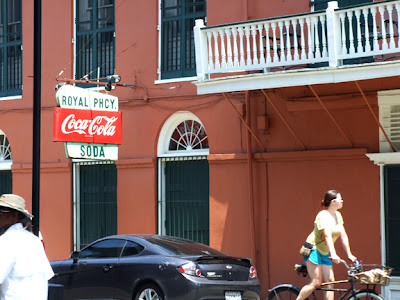 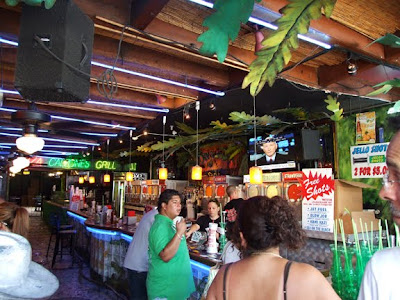 I was enthusiastic to swill my first authentic NOLA street daiquiri, although, to be honest, it may also be my last (nothing should come with a free Sex on the Beach test tube shot on the side)! 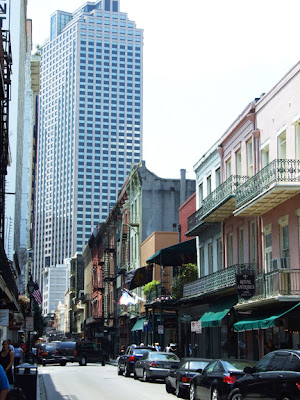 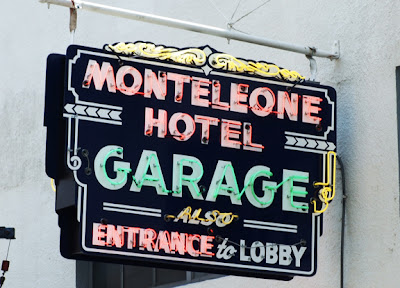 So long Monteleone Hotel and Carousel Bar, I'll miss you. 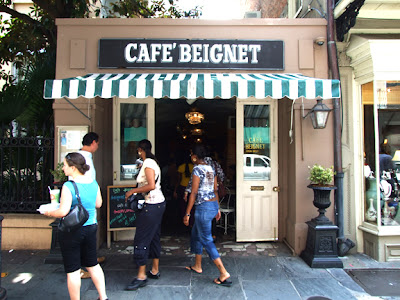 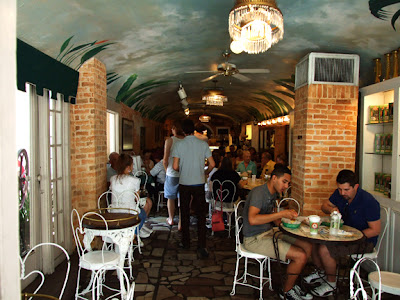 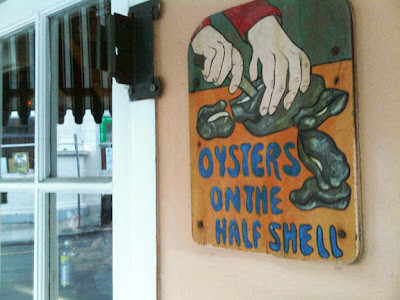 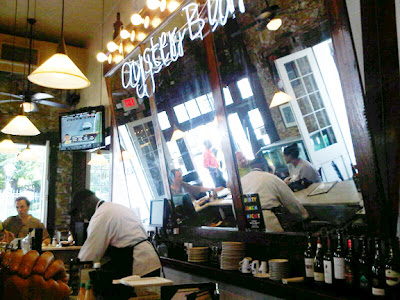 I noticed our pace slow around 3 o'clock when the sun proved unavoidable. We sought solace in the Royal House Oyster Bar, its marble corner bar and promise of a cold cocktail a welcoming respite. While the julep wasn't quite the afternoon delight I had hoped for, it was still refreshing, and the bartender was sweet to send us back outside with a full tall plastic tumbler of ice water. 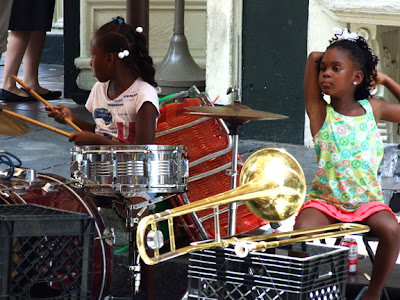 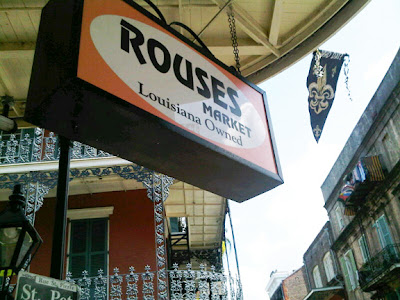 Since Central Grocery is closed on Sundays, Rouses Market at the corner of Royal and St. Peter fulfilled my take-home grocery needs (like Camellia red beans!). 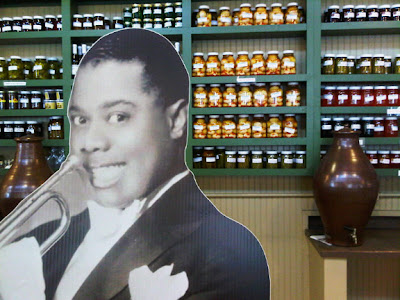 Several glasses of water later I was still having trouble cooling off. The Organic Banana in the French Market came to my rescue, a splendid real fruit alternative to the other street daiquiris and worth every penny ($6) for a frosty fresh pineapple, coconut and rum cooler. 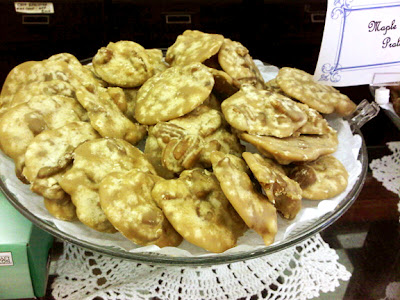 A stop at Laura's Candies is a must, my favorite praline maker in the Quarter. I gobbled a pink champagne truffle as my rum pralines were wrapped up for the trip home. 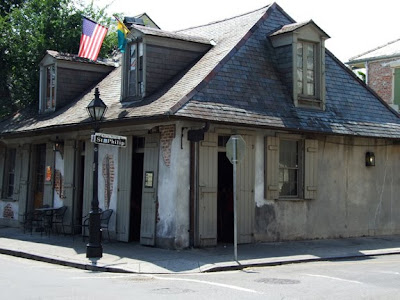 Most exciting of all, I finally got my afternoon hang at Lafitte's Blacksmith Shop Bar, my first glimpse of NOLA's history last October and the watering hole I've been dying to visit ever since that moment. Housed in a former -you guessed it- blacksmith shop on Bourbon Street circa 1772, Lafitte's is one of the oldest standing buildings in the French Quarter, and a step into the eerily cool interior is all it takes to feel its history. There are more spirits than what's behind the bar there, and as I drank my bourbon I would be lying if I didn't say I felt more folks 'round that table than Michael and myself! 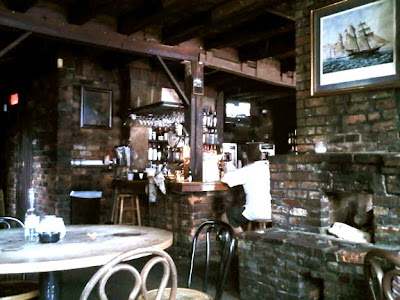 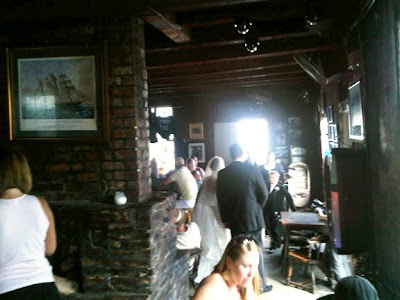 A wedding party crashing Lafitte's for a photo opp 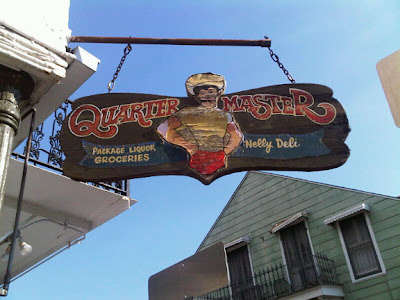 After a stop in Skully'z Recordz, to-go cocktail in hand (love it), it was time for a snack before the airport so we ducked into the Quarter Master market where the counter in the back, cheekily dubbed the Nelly Deli, had one muffaletta left, and it had our name on it. 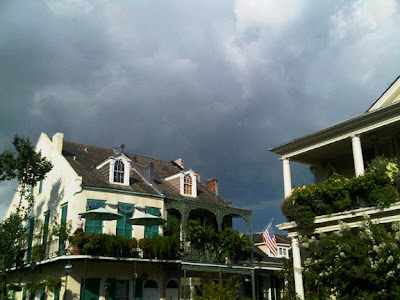 A summer storm was brewing, and the town grew a little quiet, which comes as little surprise. Inside the cab, our good natured driver was giving us the scoop on which celebs were moving in and out of NOLA, as we headed out of the Quarter and onto the interstate, from Brangelina and Sandra Bullock's new homes to Nick Cage losing his haunted LaLaurie Mansion in his financial troubles. Rain began to patter the windshield and he paused his storytelling, silent for a moment. "It's hurricane season," he said pensively. But as quickly as the rain had begun, it ceased and a beam of sunlight pierced the clouds, illuminating an outlying field near the airport. The driver was back to his story about Jon Goodman, bright Cajun drawl finally declaring "but I guess that's neither here nor there for you Hollywood folks." I laughed, thinking about how much more impressed I was with the strength of this city than any of these celeb expats, and wished him well before stepping back out into the sweetly suffocating Southern heat.