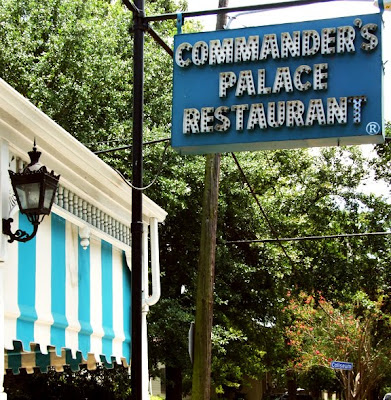 I shook the hangover from my half-mast eyes. No! I scolded myself, today is too important! I straightened my bow tie and breathed deeply. Our scheduled Jazz Brunch at Commander's Palace would not be optional.
I'd been looking forward to it since last October. Besides, I'd had the reservation for weeks, and I couldn't let the Commander down! 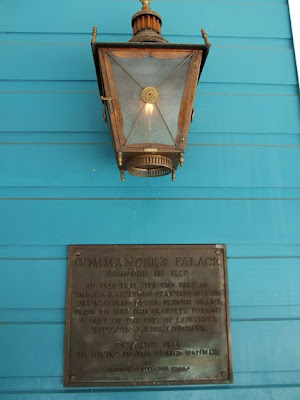 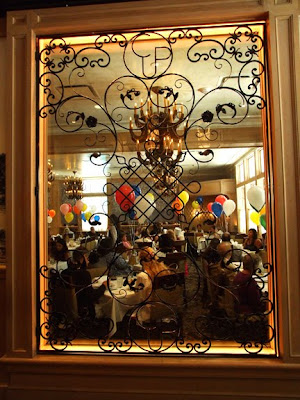 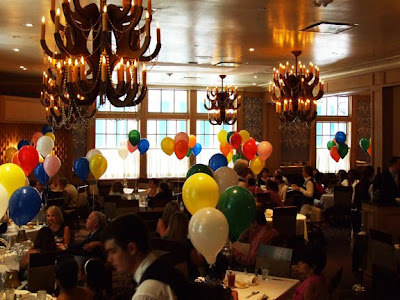 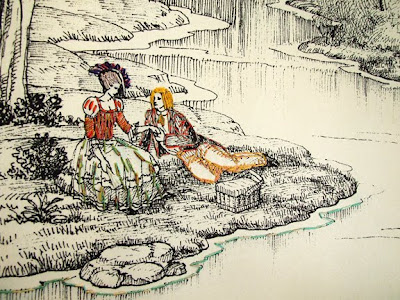 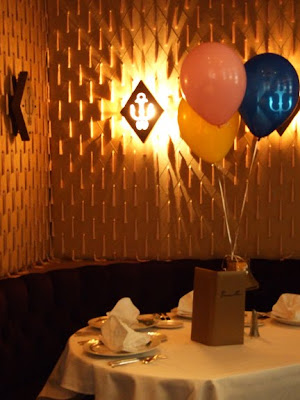 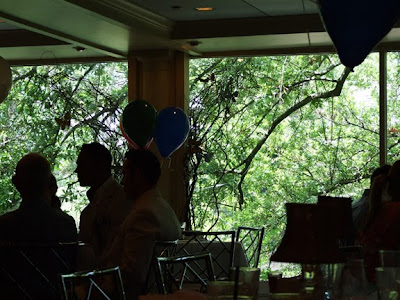 A bustling carnival of Haute Creole joie de vivre, I felt like Annie being welcomed into the Warbucks mansion, a staff of thousands smiling welcome as we were lead up stairs and through countless dining rooms to the Garden Room, a glass-walled space nestled among the ancient oaks.
As "Chef Tory's Jazz Brunch," what would it be without, well, the music? 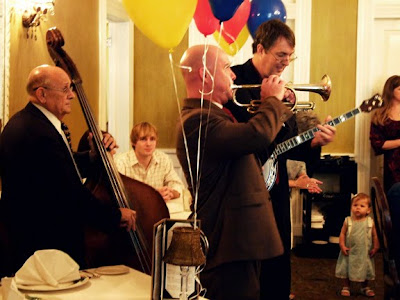 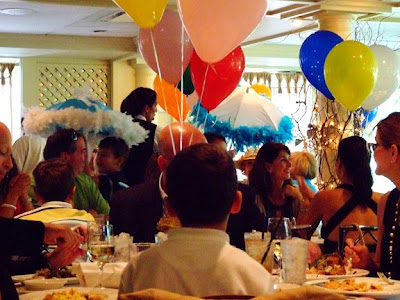 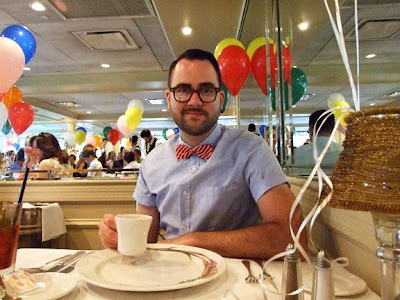 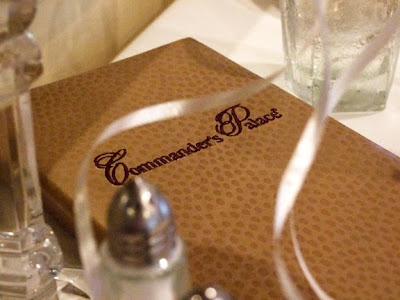 Service is like clockwork at Commander's Palace. Very fine-tuned, meticulous, gracious clockwork. The brunch formalities were explained in detail by our server, his greased-back hair catching the morning light. "Coffee.. and Bloody Mary" is all Michael and I could manage at this stage, delving back into the menu, chock full of mix-and-match 3 course brunch options, all, we were told needing to be ordered up-front. 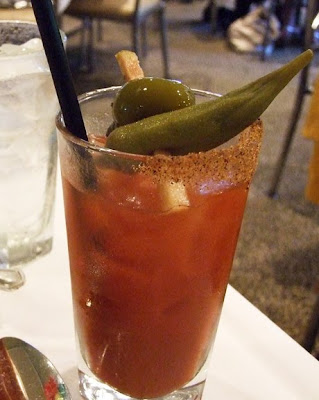 The Commander’s Palace Bloody Mary arrived looking a little skimpy, but then our server appeared with “ice block” vodka (a vodka bottle frozen into a hunk of solid ice), finishing the drink table-side. The spicy okra-topped bloody was just what the doctor ordered. 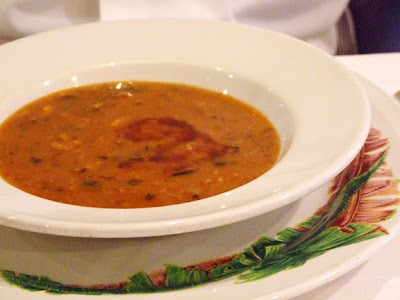 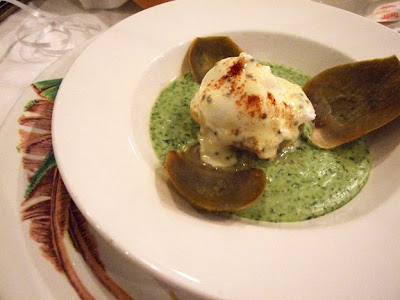 I couldn't resist the description of the Eggs Sardou² - Crab boiled hen’s egg, roasted artichokes, spinach & Pastis cream and Cajun caviar hollandaise with champagne... as I'm sure you understand. The egg sat atop an artichoke crown dressed in piquant hollandaise, all secondary however to the winsome spinach and pastis cream. The light anise nuance was a revelation, and something I've craved every day since. 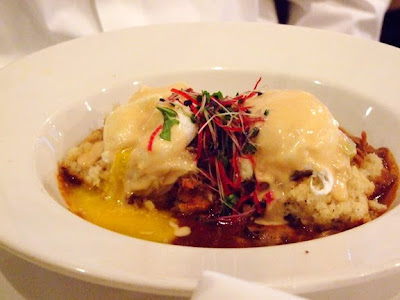 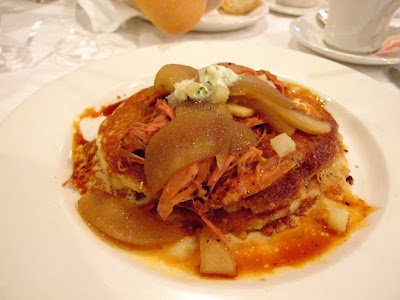 The first bite of my dish was something I don't think I'll ever, ever forget. Fireworks, people. Behold the Chicory Duck & Sweet Potato Griddle Cakes - "Forever braised" duck with bourbon soaked Granny Smith apples, house made honey butter, and vanilla cane syrup. The fragile duck meat was textbook —no, scratch that— biblical perfection - pink, smoky and sweet with such glorious depth. The griddle cakes had an immaculate crispness, each layer sandwiching duck and bourbon apples. I could only eat about a third of the plate, but it was the most sublime dish I've tasted in many, many moons. 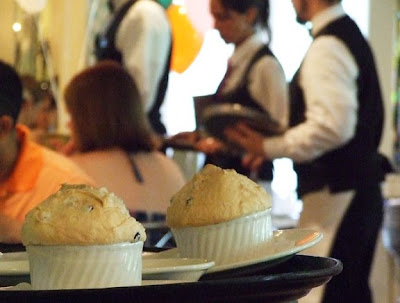 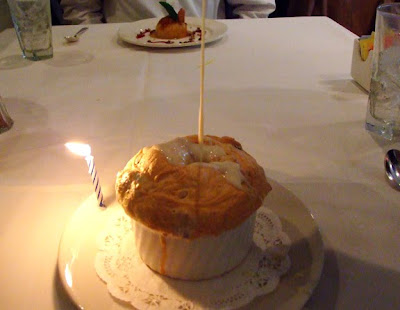 I wouldn't order dessert after a breakfast like this, but since we ordered all 3 courses at the beginning (and all are included in the brunch price tag) we had it coming. As you may have noticed by now, I tend to order house specialties always, so the Creole Bread Pudding Soufflé (“The Queen of Creole Desserts") is naturally what I got. Michael was treating this as an early birthday present apparently, and I blushed when dessert came out with a candle and a singing staff+jazz band, a paper hat appearing atop my head. Once the humiliation subsided, I could pay attention to the Whiskey Cream Sauce being poured over the air-light soufflé, breaking its surface and drizzling across the massive gable. Again, I could only manage a few bites, but boy were they luxurious! I would pour this whiskey sauce on anything, and the fluffy/sticky soufflé couldn't have been more expertly cooked. 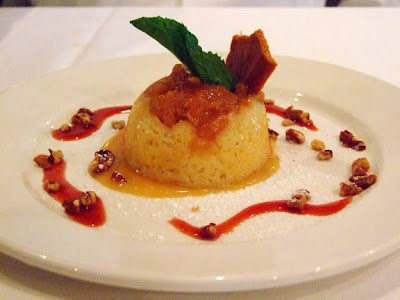 Michael had the Sticky Peach & Pecan Up-Side-Down Cake, a more forgiving portion of warm peach and ginger spiced coffee cake with grilled pineapple compote and Grand mariner caramel. I couldn't tell you how this was, I'm not sure that my taste buds were working anymore. 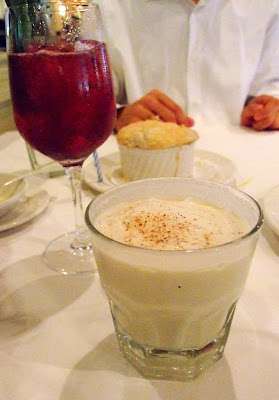 I like that cocktails are celebrated at the breakfast table at Commander's Palace, and Co-Proprietors Ti Adelaide Martin and Lally Brennan, sometimes known as "The Cocktail Chicks," openly share their passion for good drinks in The Land of Cocktails, the bar adjacent to the Commander's kitchen, and on their blog and cocktail book of the same name.
As we stared silently at our desserts, Ti stopped by our table to introduce herself and see how we had enjoyed our meal. She could see we needed another drink however, and consulted on our choices. She was gracious, outgoing and lovely, a cherry on top of a perfect experience. What's more, our drinks arrived "on Ti," a very kind gesture following our chat.
Again, always going for classic, I couldn't pass up a proper Southern Milk Punch, made with Bourbon and finished with nutmeg. Michael was more wise and accepted Ti's suggestion of the crisp and (keyword:) light Basil & Blue - Muddled fresh blueberries & basil, Hendrick's Gin and St. Germain. 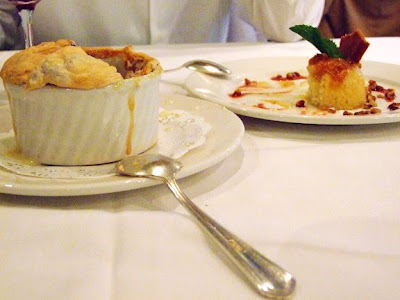 While we sipped our cocktails (and let our desserts get cold), the jazz band led some of the brunch guests on a promenade through the dining room, followed by a more somber, soulful blues standard in which a woman sitting at a table near the window just... began singing. There was a bewildered hush at first, the room trying to figure out where that sweet forlorn voice was coming from. But the awkward silence turned to enraptured audience, necks craning to catch a glimpse. A pillar obstructed my view, but I didn't mind because the voice was familiar, one I knew well. The early afternoon sun was rendered into lace-like twilight by the trees outside, a magical twinkling through the oak's branches. And in that moment I was once again in my youth listening to my dearly departed grandmother singing sweetly in her kitchen, preparing a Sunday breakfast.