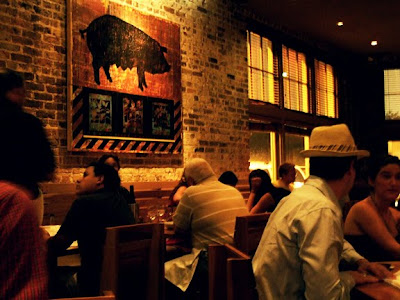 Once night fell over the French Quarter, the bayou heat took on a downright sultry character. Storm clouds broiled above as we approached Cochon Restaurant's glowing marquee on a dark corner of the warehouse district, the red hot sign seemingly scorching the thick air.
I had great expectations for Cochon... Following my last visit , I had heard nothing but raves about James Beard Award-winning chef Donald Link (Best Chef: South, 2007), the Cajun comfort of Cochon, and his first restaurant Herbsaint. I greatly regretted missing it, and thus it rose to the top of my to-do list for this trip. 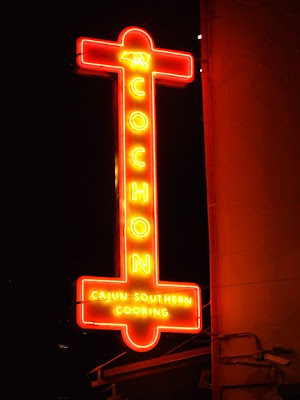 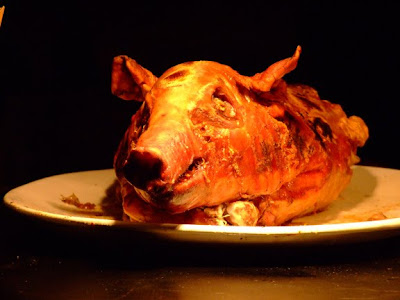 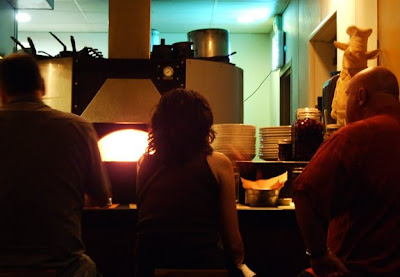 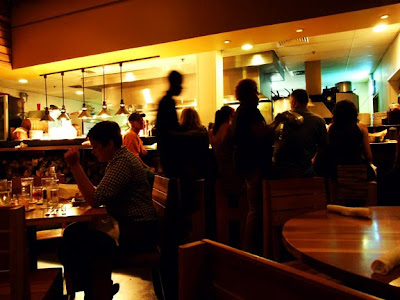 The single-room concrete-floored warehouse was bursting at its bricks with a roar that translated a strong sense of community and much jubilant feasting. Diners filled every table and lined the open kitchen bar, a wood-fire oven blazing behind a roasted suckling pig, which was slowly being carved and served as the night's special. 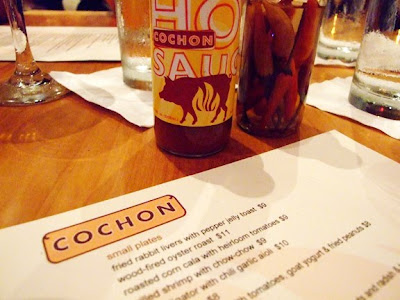 Though the menu is only one page (same for both lunch and dinner), I found it difficult to focus at all on what to get, from the small plates to the boucherie to the wood-fired offerings... Everything sounded divine. Luckily our group of four decided to start with a handful of starters which eased my anxiety. As did the brisk Sazerac... 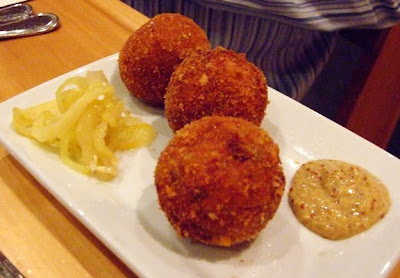 The fried Boudin balls arrived first, served with pickled peppers and Abita beer mustard. This Cajun variation on a Boudin Blanc, instead of using sausage casings, rolls the white pork and rice mixture into balls, batters and fries 'em up. Scrumptious! 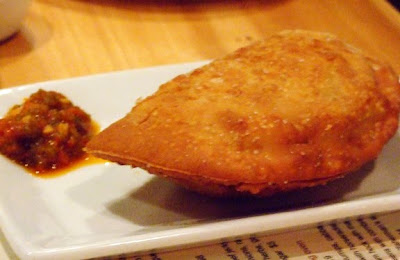 The Crawfish Pie was only slightly underwhelming to me, but perhaps because I was inappropriately expecting a dish along the lines of Jacques-Imo's intense Shrimp and Alligator Sausage Cheesecake (one of the tastiest things I've ever eaten). This was a personal-sized hot pocket-type pie, to its credit housing a nicely savory crawfish goulash. 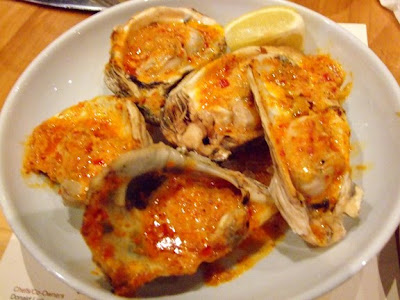 My favorite dish of the night (dare I say, possibly the trip?) was Cochon's Wood-fired Oyster Roast. I don't know WHAT they slather on these bad boys, but sell me a bottle, we're talking serious umami. Spicy, creamy, and a touch sweet, the fat oysters are roasted until practically bursting, with a fresh clean flavor that says "aren't you GLAD you weren't foolishly afraid to eat me??" YES. 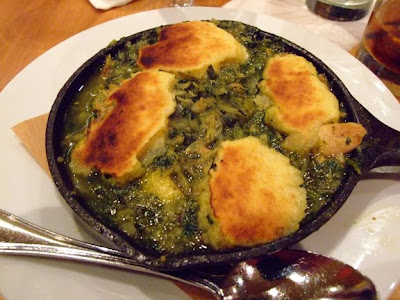 For my entrée I found myself (as tends to be the case in NOLA) attracted to the bunny dish. The Smoked Rabbit & Greens with Cornbread Dumplings came served in a cast iron pan, the "dumpling" dough (more akin to cornbread biscuits) spooned right on top and cooked in as the dish simmered. The flavors were deep, smoky and warming, my only reservation was over the water that was collecting from the greens, quickly consuming my dumplings and rendering them into liquid grits. I found I had to eat the dish quickly, which I suppose wasn't a terrible thing. 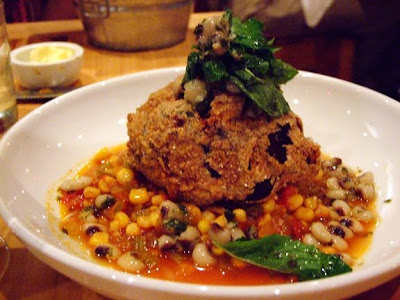 While the rabbit dish is classic Link, the Corn Flour Crusted Ham Hock with Maque Choux & Black Eyed Peas that Bruce ordered was the Big Guns. The rich intensity of the meat here proved to me that Link not only respects his meat, but that he's a true master at preparing it. 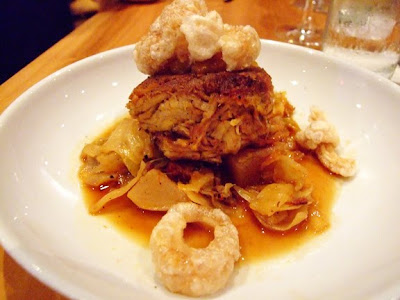 The restaurant's namesake Louisiana Cochon with Turnips, Cabbage & Cracklins was winning, as expected. Larry found his pork a tad on the dry side, but Michael seemed pleased with his plate. Like the other proteins, the pork's depth of flavor played center stage here, a monochromatic dish that didn't need any green to feel balanced. 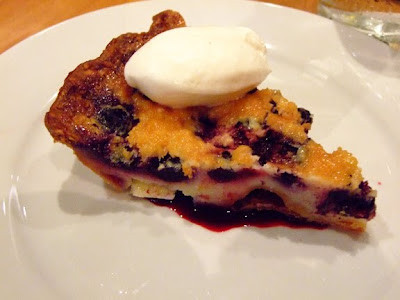 Throughout the meal, mischievous heat lightning occasionally lit the warehouse window panes and by the time our entrée plates were cleared had broken into a torrential summer storm. The idea of battling the elements in our summer clothes (and with my case-less camera in tow) was  less than appealing, so as stuffed as we were two desserts were selected to "pass the time." The Lemon-Buttermilk Pie with vanilla whipped cream was classic and tasteful, but a little lackluster after such an incredible meal. 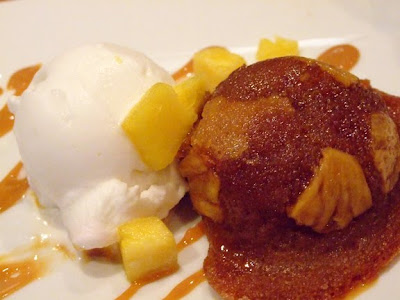 The Pineapple Upside-Down Cake however surprised us all. Suggested by our server, the cornmeal cake with coconut-lime sorbet & dulce de leche was elegant and tantalizing. 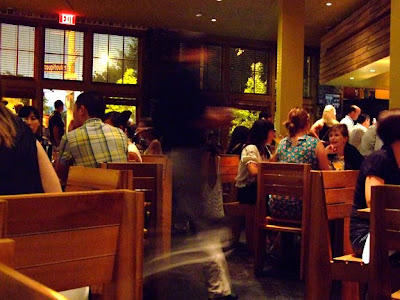 Once the rain subsided (and after I purchased a bottle of Cochon's house-made hot sauce and Link's 2010 James Beard Award-winning cookbook Real Cajun - check out some recipes here) we ducked out into the even more humid night, quickly checking out Cochon Butcher next door before heading back to the Quarter. 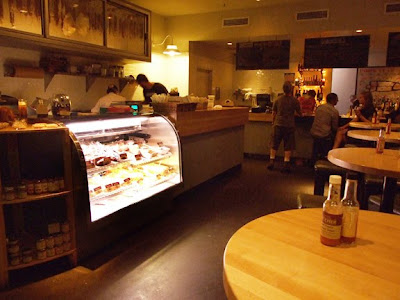 Butcher specializes in house-cured artisan meats and sausages - all made on site. The store also offers Cajun specialties like Boudin, Andouille, Tasso, and Cochon's line of condiments.
In addition to the sandwich menu (Muffuletta, Pastrami, Cuban) Butcher offers small plates and salami tastings paired with an eclectic list of wines selected by wine buyer Joe Brian, and seems like a relaxed overflow option for when the restaurant is packed... Which is often, and now I know why. 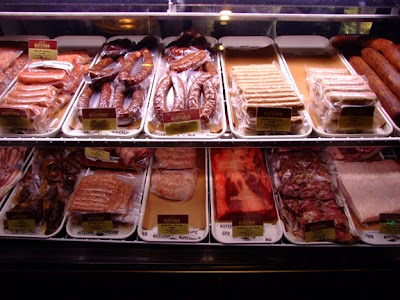 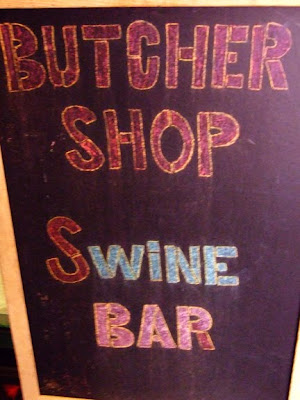