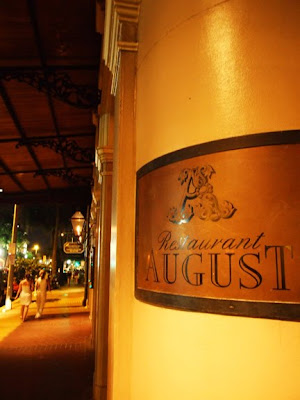 Saturday night, and hot as a billy goat in a pepper patch. It was also one of New Orleans' quintessential celebrations, White Linen Night. Every summer on the first Saturday of August, the city’s Warehouse Arts District brims with white linen-clad folk wandering the galleries along Julia street, fanning themselves and quenching their thirst with copious amounts of wine. Restaurant reservations in the neighborhood are apparently impossible to come by, so luckily we had booked our table at John Besh's Restaurant August -just blocks from Julia Street- several weeks prior. Besh's flagship award-winning restaurant is located in a gorgeous historic four-story French-Creole building circa 1800, soaring wood-framed windows bound in solid brick walls. 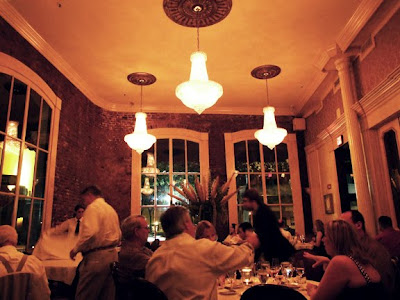 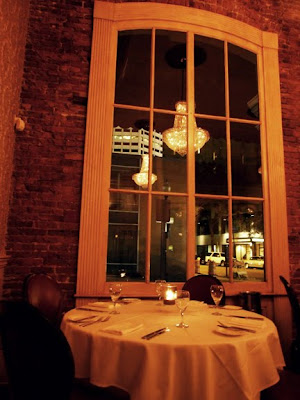 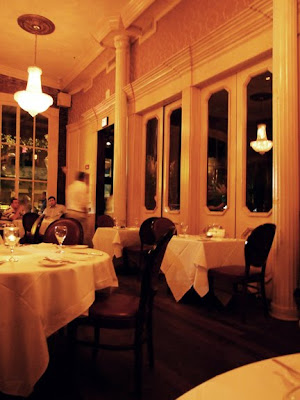 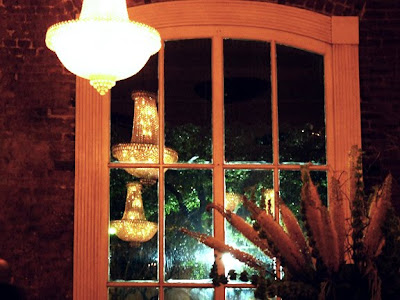 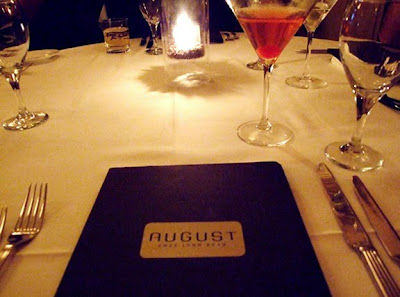 We were seated at a round table at the room's central meridian, feet from Besh's framed 2006 James Beard Best Chef medal. Service was meticulous and labored; One sip of water and a pitcher was topping off the glass. Our server sent the sommelier over while we flirted with the extensive list. 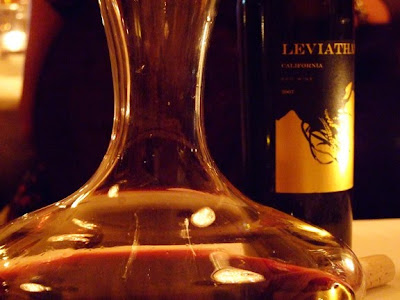 The shockingly young steward guided us to the perfect bottle to best match all of our entrées and our price point, the Leviathan 2007 Napa Valley Red Wine. Made by Andy Erickson, the winemaker for Screaming Eagle, Leviathan is a blend of Cabernet Franc, Cabernet Sauvignon, Syrah and Merlot with deep dark fruit & spice and a long luxurious finish. 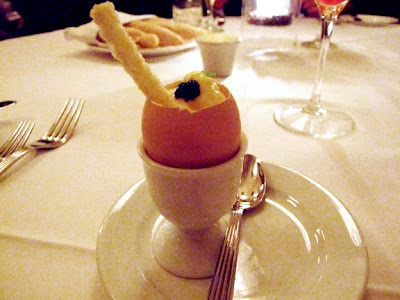 An amuse-bouche arrived, housed in a brown egg shell, described as a savory fish stock mousse with sabayon, bowfin caviar and brioche. The deep salty custard, light alcoholic cream and accoutrement made for a stunning starter. 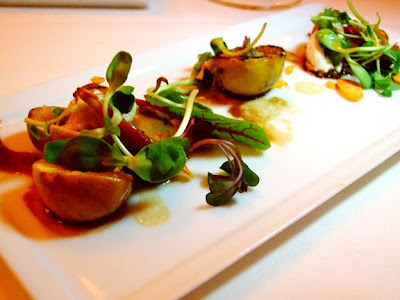 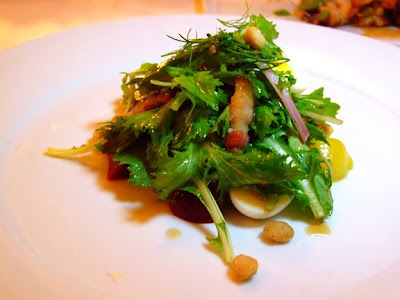 The salad of heirloom beets, crab meat, cherry wood bacon, mizuna, and quail eggs was a lovely balance of texture and smoky/fresh flavors. 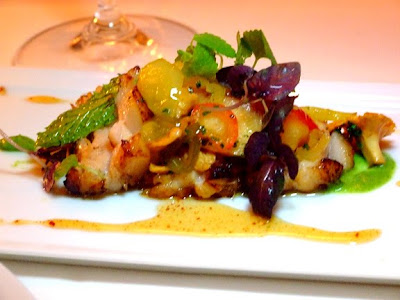 Our third gorgeous small plate was cane glazed pork belly and grilled Ruston peaches with pickled chantrelles and aleppo pepper. I wished for more pork belly, but loved the melange of bright flavors. 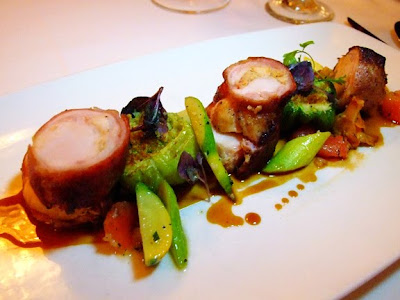 There were two entrées that called to me, but like a greyhound race the bunny won again. This rabbit was slow cooked, wrapped in La Provence bacon with white bean stuffed baby sweet peppers and heirloom tomatoes. The dense and luscious rabbit was quite nearly upstaged by the exquisite house-cured bacon, raised on Besh's own farm. The adorable stuffed peppers were a crunchy delight. 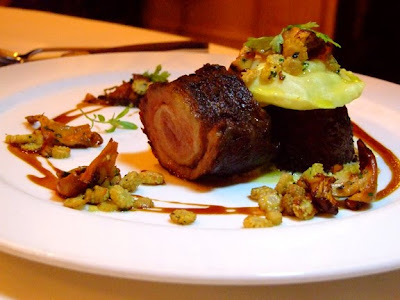 Larry's entrée, the slow cooked beef ribeye "coulotte" with Jim Core's silver queen corn and smoked bone marrow was melt-in-your-mouth opulence. He seemed to be enjoying it, so I didn't levy a second bite. 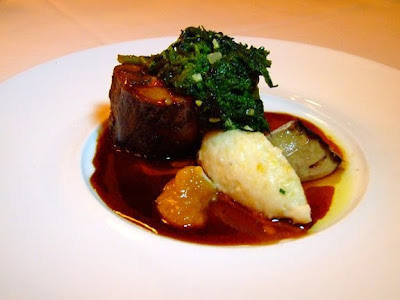 Michael tenderly explored his gorgeous plate. He had ordered my second choice (which I was fearing should have been my first), the cutely named "sugar and spice duckling" with McEwen's stone ground grits, roasted duck foie and local peaches. "Oh.. my.." and Michael went silent.
"I think we should share," I said then, knowing he had the winning dish. One heavenly bite of the sweet delicacy made me beg to split our two entrées, on the condition he could finish the foie. If prosciutto is the chocolate of meats then this was surely the Christmas of meats. Let it snow! 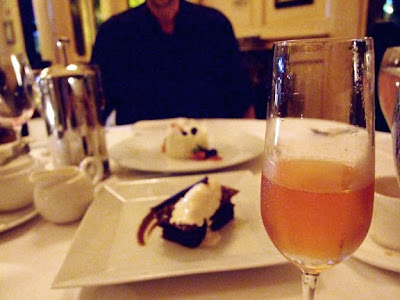 After a meal like this, dessert saldy isn't an option, it's an obligation. A digestif, an espresso, a bite or two of sweet in conversational afterglow is the only way to respect such a gift. Michael and Larry ordered a Tawny port, but it was a warm night, even in the dining room, so I craved something chilled. Our server tempted me with the Late Harvest Sauvignon Blanc (Honig, Napa Valley, 2006), and won. The golden honeyed intoxicant tasted like fresh autumn fruit, a soft pleasure to roll upon the tongue. 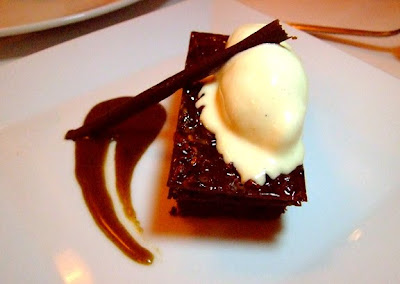 The gentlemen insisted on the Napoleon, which I may have skipped - but was glad we did not. The layers of brittle nougatine were cemented with bittersweet Valhrona chocolate bavarois, topped with salted toffee ice cream. Salty sweet perfection. 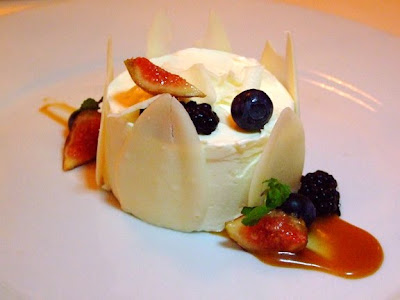 Meanwhile, I insisted on Pere Roux's banana rum cake with Creole cream cheese icing, a small picturesque crown befriended by plump berries and a sliced fig. The liquor lent a sweet moisture to the subtle banana confection, and perfectly paired with my dessert wine. 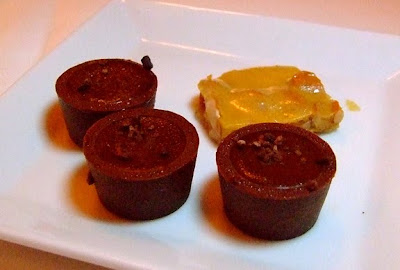 One last kiss arrived in the form of small dark chocolate ganache cups topped with cocoa nibs and a salted brittle, but I could not partake. Well, I lie, I took one nibble before easing back into the round of my chair, breathing slowly and watching a tablecloth across the room float effortlessy across a table, quick hands smoothing its edges in a seasoned arc. 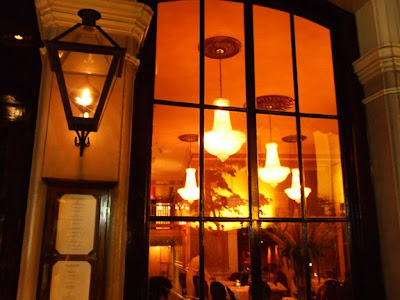