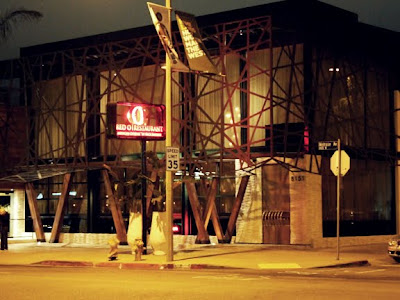 And then, as soon as he stole America's heart on Top Chef Masters, the humble and lovable Rick Bayless opened a flashy restaurant in West Hollywood, the first outside of his Chicago Frontera dynasty. I couldn't help but approach Red O with a touch of reticence. Could this Vegas-y monolith be from the same down-to-earth Bayless that taught me how to eat well everyday through his fresh cookbook Mexican Everyday? When I went to enter Red O, a man outside the door asked for my name to ensure I had a reservation - but he wasn't the maître d', he was actually a door man... for a restaurant? Red flags waved, but I kept calm and carried on. 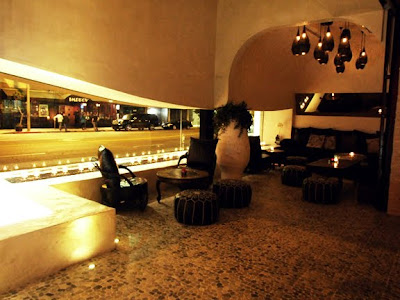 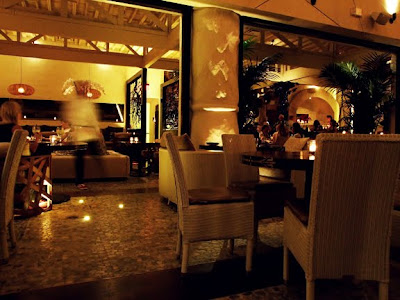 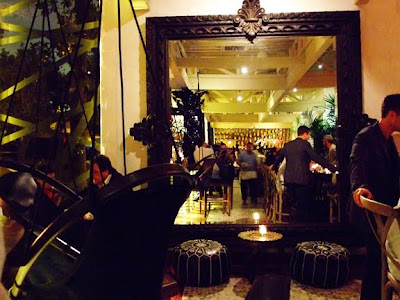 The interior is dim and dinny like a hotel lobby (for some reason I expected the spray of a fountain on my face from between the potted palms). Architecturally I found it over-embellished, and over-decorated (a la Z Gallerie) - Also shockingly dated for a brand new A-list restaurant. Why is it not clean and confident, like Bayless' food? Once I got one of the host's attention she said it would probably be another 30 minutes or so for our reservation (9:15pm on a Tuesday), so we made our way to the bar for a drink. 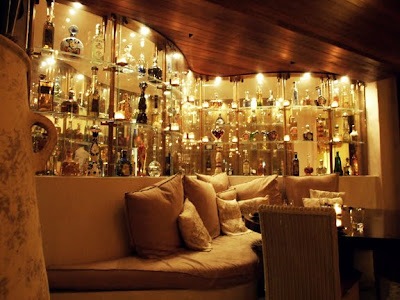 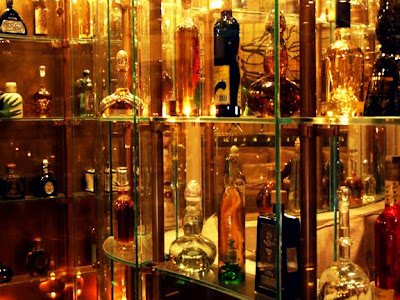 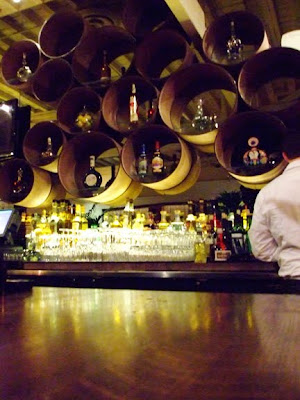 A winding glass-walled tequila cave and ornate metalwork-encased bar express a strong alcohol prevalence at Red O. This made me look forward to the specialty margarita menu I knew I would be handed. We saddled up on bulky cream leather bar stools beside two older women sipping chardonnay bobbing in two slingy black swings, an unintentionally perverse decor concept. 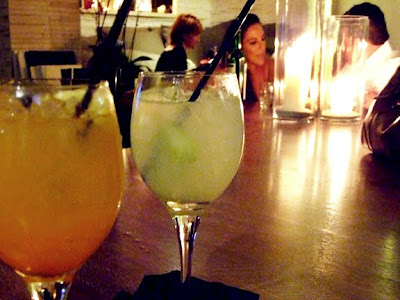 I ordered the Market Margarita, fresh cucumber-honeydew melon muddled with agave nectar, Arette blanco tequila, lemon & lime juices. Michael ordered the Maceta Margarita with Herradura silver tequila, Veev Acai spirit, fresh Mexican papaya, homemade limonada, rosemary & lime. We thought we'd sample the exotic differences between the two very different sounding drinks. I sipped mine, it was a decent margarita, but the cucumber and honeydew flavors were incredibly subtle, or perhaps overpowered by the sour limonada (their homemade marg mix). I tried Michael's Maceta, expecting a sweet punch from the Acai and papaya, with rosemary nuance. I laughed, it tasted exactly the same! He sampled both, shrugged. Despite a slightly different hue, we sat and sipped our innocuous coolers while the abrasively plastic bar crowd cawed about us like ravens on Hitchcock's playground. 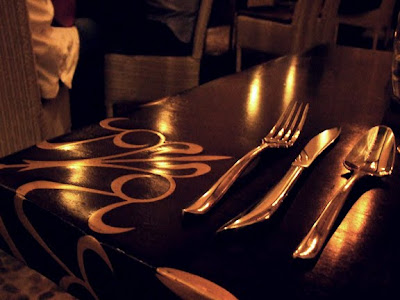 Our table was ready close to 10:00pm, which probably benefited us as the room began to clear and we were seated at a quieter corner table. 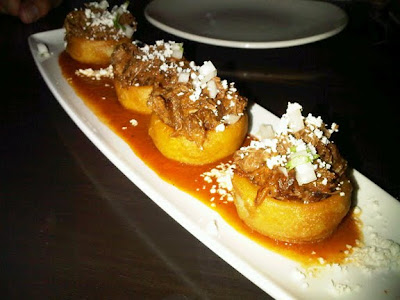 Our server went over the large menu, loaded with 'savory snack' starter small plates such as tamales, taquitos, and quesos fundidos. We immediately gravitated toward the Shredded Creekstone Beef Short Rib Sopes in a roasted tomato-green chile sauce. Things were looking up! The smoky delicious short rib and crispy masa sopes were a match made in heaven, married in the delicate but flavorful chili sauce and dusting of crumbled queso fresco. I could have eaten 2 more orders... 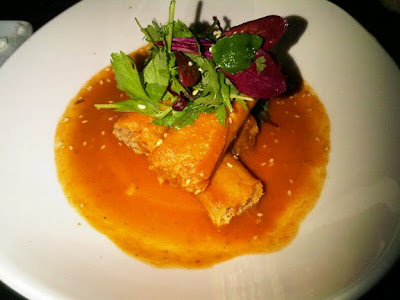 Next we tried the Slow-cooked Sonoma Duck taquitos with tomato-arbol chile sauce and arugula, per suggestion from a friend who had come a week prior. The light shells reminded me of egg rolls more than taquitos, and they were very petite. The flavors were nice, but maybe too mellow following the bold sopes. 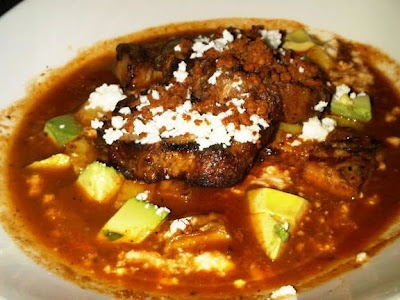 Since it had turned into a late dinner, we decided to split an entree. We settled on the Tinga Poblana - A pork trio consisting of homemade chorizo, braised Gleason Ranch pork shoulder & belly, with roasted tomatoes, smoked chipotle, Yukon gold potatoes, avocado, queso fresco. The dish was an absolute winner. The layers of flavor and consistencies found neglected taste buds in the back of my mouth and made them sing. Warm homemade tortillas sopped up the rich broth and tender pork. The bites of avocado tamed the heat, which was just right. It was the kind of dish you could eat again and again and never tire of. 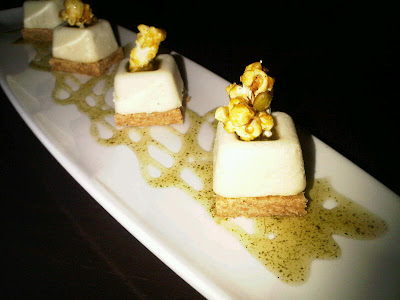 The desserts all sounded relatively expected (tropical fruit sorbets, empenadas), but the creamy goat cheese cheesecake with caramel corn and Mexican "root beer" sauce sounded just curious enough to try. Our server told us it was a Frontera staple, served at all of Bayless' restaurants. All the more reason. The cake was actually another series of bite-size pieces. The sauce is made from Hoja santa, a central Mexican herb sometimes aptly called "root beer plant". The piquant sauce had more bite than Barq's and complimented the farmy cheesecake, nutty crust and caramel corn crown ever so nicely.

While the meal overall left a pleasant impression, existing a stones throw in any direction from winning authentic Mexican food a fraction of the price, Red O's existence in LA amongst such ubiquity still seems curious. Susan Feniger and Mary Sue Milliken have made a name for themselves over the years in LA creating "new" Mexcian cuisine, as Bayless has in Chicago. But why here, why now? I expected to be blown out of the water, which would have been my answer. But while I wasn't, I of course can't hang it all on Bayless. I learned he is not in fact the executive chef of Red O  - Michael Brown (of Patina Group and Wolfgang Puck Catering) is. Bayless does not cook in the Red O kitchen, nor does he own it - Mike Dobson and Rick Teasta (responsible for the EZ Lube oil changing chain) do. So is it really any more than Bayless' name? He developed the menu and trained the staff, but what's in it for him? These are all questions I asked myself leaving Red O, satisfied with a tasty meal but still searching for answers.