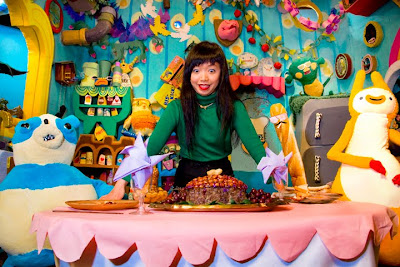 Some of my college mates have also struck success at IFC with their original series Dinner with the Band, combining culinary delights, musical performances and conversations with select acclaimed indie music artists. In each of the 30-minute episodes, celebrated NYC rock-n-roll chef Sam Mason (Tailor, WD-50), invites a band over to his Brooklyn loft where he teaches them how to add his signature culinary spin to their favorite “on-tour” food.

Food Party and Dinner with the Band debut tomorrow, April 27 at 10:00 pm ET/PT on IFC
Thu Tran of Food Party will be chatting with fans LIVE online during the premiere.
Posted by Nathan Hazard