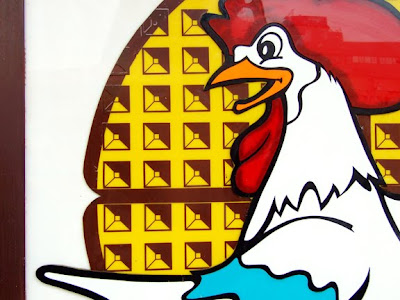 You don't have to be an Angeleno to know about Roscoe's House of Chicken N' Waffles. So tell me how I've managed to live in or around Hollywood since 2005 and never been until late? At any time of day or night you can always count on a scene outside of the wood-sided Roscoe's on Gower in Hollywood, post-bar crowds at times larger than at the clubs. So what's the deal?
Chicken and waffles: A delicious holy union conceived in Harlem, brought to LA in 1975 by the original Roscoe's, nailing several firsts in the local restaurant scene (then hardly much of a scene at all). Its originality has seldom been surpassed, as Roscoe's (now with five locations) remains a cornerstone of quintessential quirky LA culture.
I recently met my friend David for breakfast while he was in town for work, coincidentally staying just around the corner from Roscoe's. Neither of us had ever been, and both favor a hearty breakfast. We got our early weekend start with some bold coffee and some very full bellies. 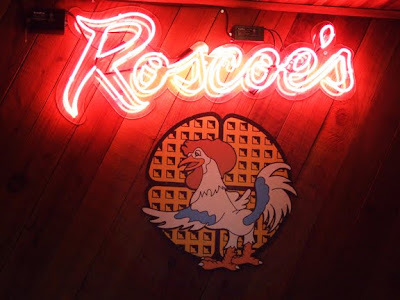 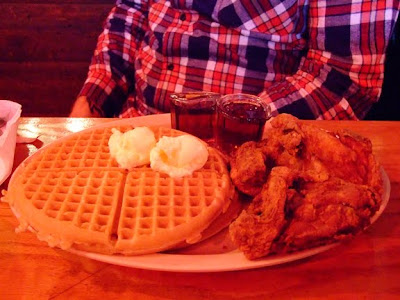 I always appreciate when dining establishments put their specialty right there in the name, because, as a Libra, it doesn't leave much room for indecision. Always order the specialty - that's my motto - especially upon a first visit. Chicken and waffles it was. Not sure I was feeling peckish enough for Herb's Special (1/2 chicken + waffles), I went for the abbreviated Scoe's Special of a 1/4 chicken fried Southern Style and two waffles. Tiny feather sticking out of my wing tip aside (yeah.. for real), the chicken was pretty good. Difficult after so recently returning from having the most incredible fried chicken of my life in New Orleans, but it was crispy and tasty. The waffles were perfectly fluffy golden delicious, not thin n' limp or thick n' crunchy like many breakfast joints. And it was a LOT of food. We were satiated. In fact I was so full that, though I was parked right out front, I was happy to walk David back down the street to his place and pretend I was just enjoying the crisp winter morning. 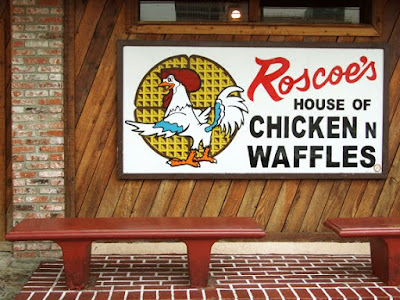