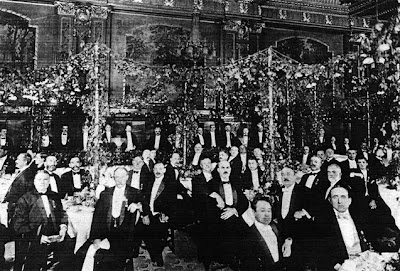 Palm Court Ballroom, The Alexandria, circa 1920 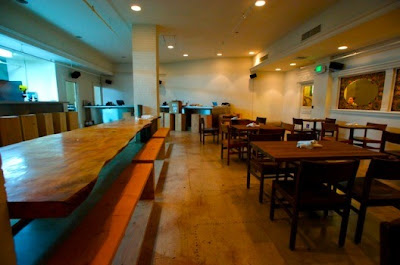 The Gorbals, The Alexandria, circa 2009 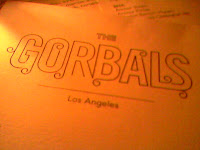 The woman seemed to be dancing with the stale lobby air, an invisible embrace of ease and grace. We were peering curiously past her into The Gorbals, recently opened on the bottom floor of one of downtown LA's reclamation hopefuls, the 1906 rough-around-the-edges Alexandria Hotel (where my companion also happens to live). Once we were in the dancing woman's sights, there was no escaping. She stepped toward us. "Siddown! Come on in boys.. Enjoy yourselves!" She waved her arm dramatically, voice echoing down the empty marble corridor. "First drink's on me!"
Trusting an impulse, I punched Ryan's arm, "Alright!"
The waitstaff inside the almost empty room were gathered around the bar, and by the looks on their faces I could tell this woman out front not only had been hanging out for a while, but definitely was not their enthusiastic employed hostess. Last to turn was Ilan Hall, saddled at the end of the bar, laptop and whiskey glass in front of him, trademark eyeglasses catching the fluorescent kitchen light in the otherwise dim room. The Top Chef winner and LA transplant seemed as comfortable as a mafia kingpin in his new restaurant's sketchy/cozy digs. He smirked at us as the bartender dropped two coasters and a thankful/understanding look.
A row of Scotch bottles lined the bar, a couple of beers on tap rising above them. We ordered two draught Sierra Nevada Celebration Ales and looked over the small one page food menu. I had read many things about the Gorbals, most memorably that Hall had described it as "old Jewish food date-raped by bacon." A closer look shows an eclectic array of fusion peasant food, largely meaty European country & pub fare optimizing the rare and/or discarded animal bits, with a pinch of Israeli flare (his mother is Israeli, and the name the Gorbals refers to the culture-rich neighborhood in Glasgow where his father grew up). 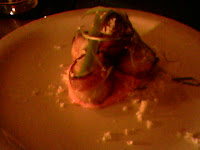 We weren't itching for a meal, more a small nosh with our beer, which was par for the tapas-like menu. We started with the Bacon-Wrapped Matzoh Balls with horseradish mayonnaise. Jewish, bacon, indecent carnality, it was all there with this signature bite, and sinfully tasty, though simple. The Butternut Squash Latkes on the other hand were complex and subtle, perfectly matched with a lightly sweet, ambrosia-like, fluffy sunchoke cream. I could have eaten 3 orders (though yes, probably would have died from the grease). Had I been moving on to a main course, it would have been the GLT (Gribenes, Lettuce and Tomato on rye), gribenes (crispy fried chicken skin) cheerfully replacing bacon. We washed our interesting sampling down with another beer and left the room as empty as we found it, our dancing queen long gone, the staff once again gathered near the bar.