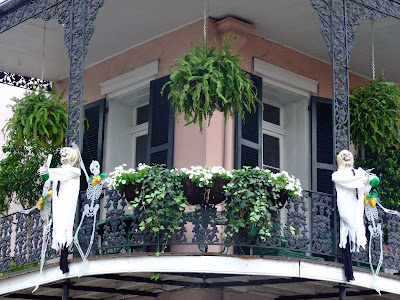 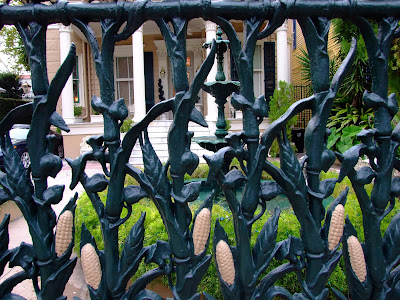 Saturday morning, Halloween, once again the sun was shining - but this guy was not! Extremely hung over from a long night of vodka sodas (I don't even drink those!), getting out of bed was next to impossible... Out on the streets people were already in costume, a bracing excitement among the community for one of the biggest days of the year here in NOLA. The air was crisp and cool, a wintery bright sun overhead, skies clear and cornflower blue. I was praying to be healed by this gorgeous day, not to mention the long night ahead! 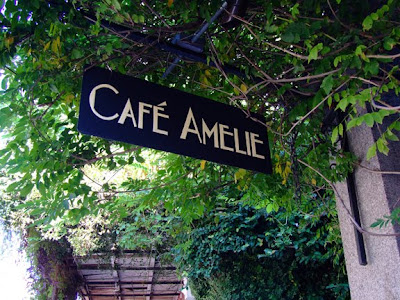 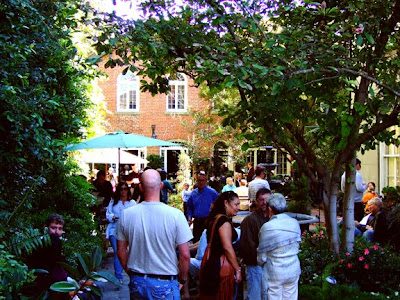 After seeing a crowd outside of trendy Eat where the other guys were, Michael and I doubled back toward St. Philip and ducked into Café Amelie, set in the lush and beautiful 150 year-old Princess of Monaco Courtyard and Carriage House. Dry ice bubbled from the central fountain and the cocktails being delivered by witches and pirates. We were seated between an open set of French doors to the interior in two Queen Ann wing back chairs with a low scalloped tea table and a view of the courtyard. I sighed, taking in the perfection of moment. However I was sadly becoming increasingly aware of how not-well I truly was. Hoping some hair of the dog would cure it, I ordered a bloody mary. It was exactly how I like them, thick with a healthy kick of spice and overflowing with pickled okra, olives and pearl onions. We ordered the soup, a spicy sweet potato and andouille bisque and a cochon de lait (slow roasted cajun suckling pig) sandwich to share. The soup literally blew my mind. It was incredibly spicy, but also nicely sweet with chunks of andouille. The smoky cochon de lait was just as incredible, but after one bite I could not eat anymore. I sadly had to dismiss myself and leave Michael to return to the hotel and go straight back to bed. If I missed Halloween how could I forgive myself?!

I woke up late afternoon to the boys coming back to the room, straws squeaking against Styrofoam, which I KNEW meant daiquiris to go! I moaned in jealousy and knew I had to snap out of this! They were off to grab a bite, probably just at Coop's again down the street, but suddenly food was sounding doable again, so pulled myself together and tried Saturday, part 2.
Down on Decateur, the Halloween parade was already heavily brewing, it was next to impossible to get through the crowds of aliens, witches, clowns, overwhelmed tourists, and of course gutter punks. There was literally a line to get into Coop's, so we kept walking, and didn't break through the crowd until we were practically in the the Marigny. I was fine with this since I hadn't been out this far and had heard a lot about this burgeoning arty neighborhood that had been once described to me as the Echo Park of NOLA (here's a good list for visiting the area). Cute curiosity shops were packed with last minute costume shoppers, dive bars were setting up for a long night ahead, and late parade-goers ran by in the streets back toward the French Quarter. 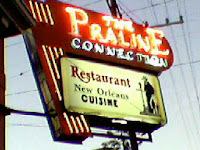 The guys had a new plan, and it was fried chicken. We reached a corner and then I saw the sign - The Praline Connection. This place was amazing. Once I had my Abita Amber in hand, a coke and a water, I was started to perk up a bit. Apparently there was a problem with the deep fryer so things were taking a little longer than normal. Our super sweet server, dressed in 1940's gangster black and whites brought us a round of Filé Gumbo on the house. Eventually our food came, and the smell alone brought me back to life. The fried chicken was lightly seasoned and deep fried to crispy perfection, moist and deeply flavorful. I got a side of mustard greens and macaroni & cheese. This is what I had been waiting for all my life - REAL friend chicken! I was not disappointed. Outside it was getting dark and all up Frenchman street a crowd was assembling much like Decateur. A mobile confessional booth complete with glowing eyed demons atop was wheeling by when exited the restaurant. These people weren't messing around! We took quieter side streets back into the Quarter, which was one of my favorite walks of the trip, the ambiance of this city at its peak. An anticipatory hush accompanied us as we clacked over bricks past cobwebbed windows, flickering gas lamps, and the occasional ghoul running to meet their friends. I breathed in the cold, ready for the night. 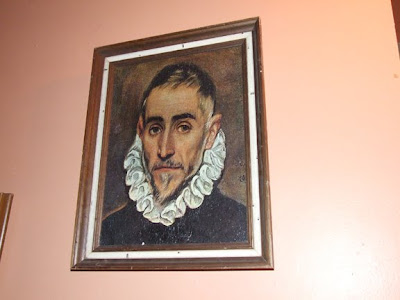 Back at the St. Philip, I pulled out my costume (an Elizabethan opera costume I acquired at the LA Opera rummage sale several weeks prior - not unlike the dude above who was hanging in the hallway outside our room!). The guys were pooped from a long day of drinking and eating, but I was just feeling great again, so as they napped I pulled on my leggings, doublet and ruff and went out into the streets with my camera to find a face mask to accompany the look. I was shocked how WASTED people already were at 7:00pm! I literally felt a bit unsafe on Decateur by myself, nice camera in tow. Hoping to capture some candids in the street of costumed revelers, I instead kept my camera tucked out of sight in my balloon sleeve and stuck the shops until I found my mask, then made my way back to the hotel.
Once met by moonlight, our band of costumed hooligans wove down Bourbon Street through the festive madness to where our "shuttle" (yellow school bus) was to pick us up for our destination masked ball at Mardi Gras World on the waterfront. (Insert long night of partying here).
By 4:00am a cab finally got us back to the Quarter where the street party was still in full swing. Down to just two of us, Mike and I shared one last beer standing on a street corner surrounded by goblins, a final toast to the creative insanity before us. 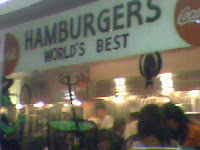 As we headed back down Bourbon street, the infamous Clover Grill diner was lit up like a beacon in the night, a line running out the door and into the street. Mike pushed his way to the front and placed an order to go, the aroma of thick grease hitting me as the door swung back. The Clover Grill proudly proclaims that they "cook our burgers under a Hub Cap!" - So what else was there to order at 5:00am to finish off a completely insane Halloween? 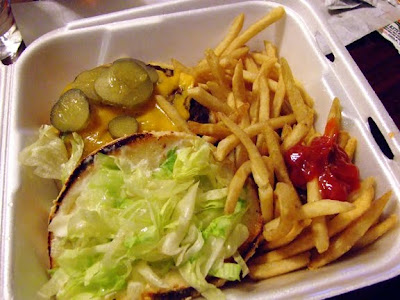 Back at the St. Philip we watched a Roseanne Halloween episode marathon on Nick at Night and devoured our drippy buttery hubcap burgers, so very pleased to be back on my horse and ready to ride onward. 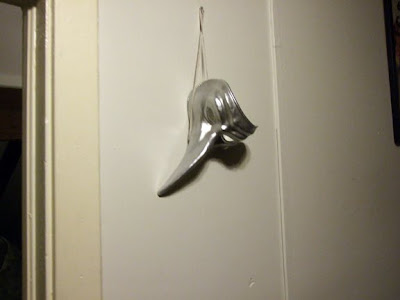