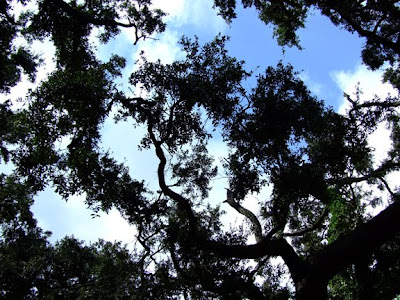 The forecast said rain, but on my third NOLA morning, sun streamed in through the window and the Southern birds were chirping. Our rental car for the day was parked on the curb outside and we were packing up for a day trip to visit Laura Plantation, an authentic Créole sugar cane plantation on the bank of the Mississippi. 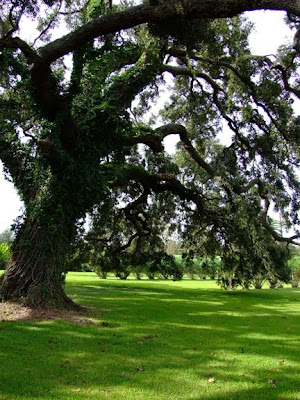 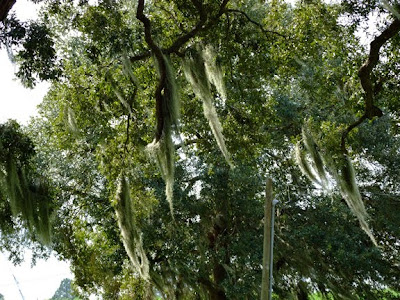 The splashy color is what distinguished a French Créole home from the common white columned American manor houses (the Créole were a proud people who didn't want to be mistaken as American by passersby). Built by the Duparc family (and originally called l'habitation Duparc) in 1804, the sugar plantation was run for four generations by the matriarch of the family, lastly the plantation's namesake, Laura Locoul. 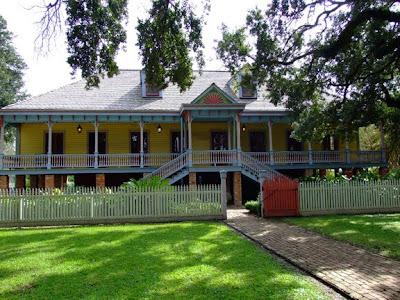 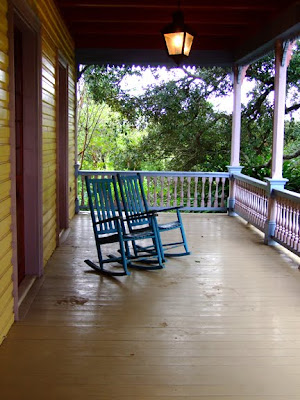 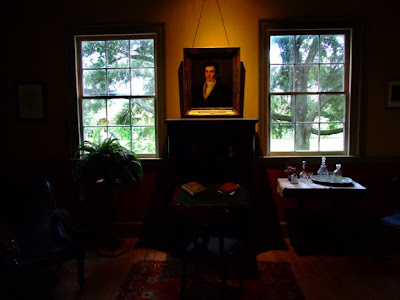 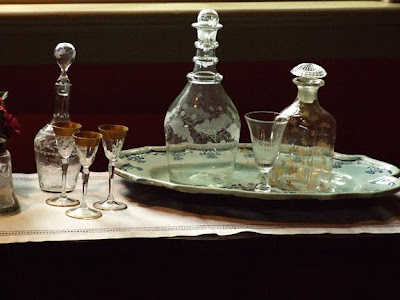 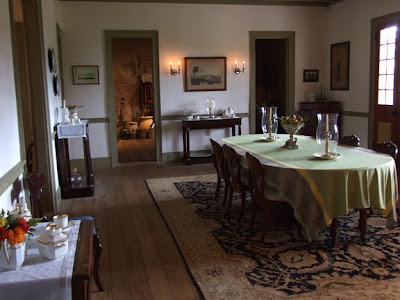 Not the family's primary residence, the plantation house served as office headquarters for the business as well as the site for all manner of social entertainment - probably why the dining room is the largest, central room of the house. The front room served as an office. 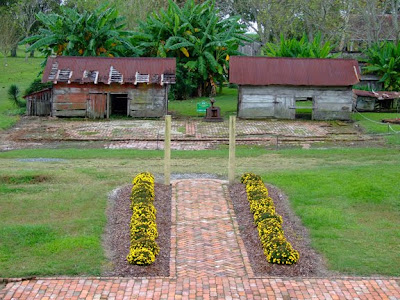 The brick plot in front of the animal coops here is where a 2,500 square foot detached kitchen once stood behind the main house. 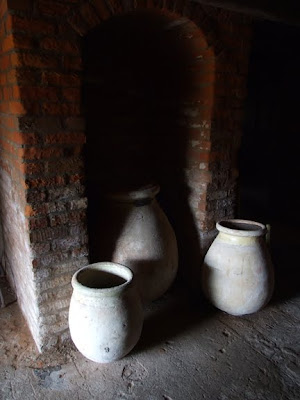 These clay pots were buried to the rim in the moist and cold swamp earth and used to "refrigerate" milk and other perishable foods. 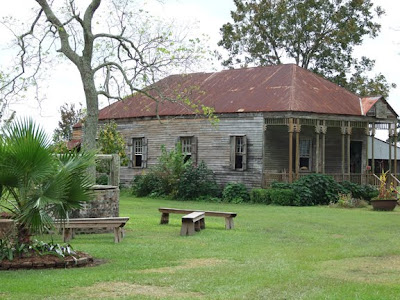 Approximately 400 feet behind the house was a road, going south, perpendicular to the river, lined on both sides with slave cabins and stretching a distance of 3.5 miles. 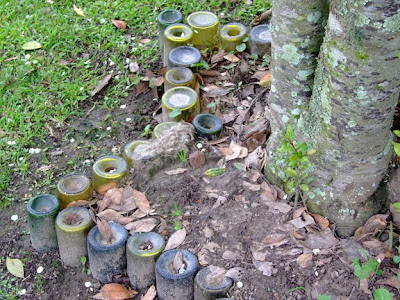 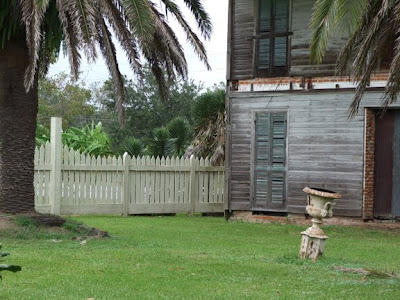 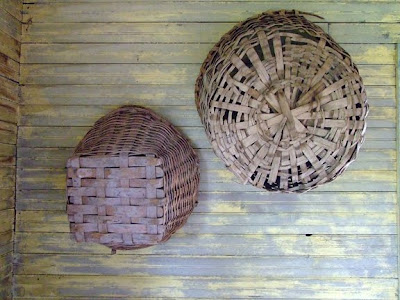 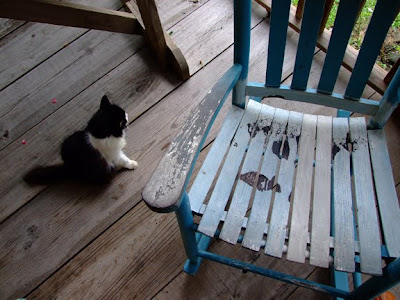 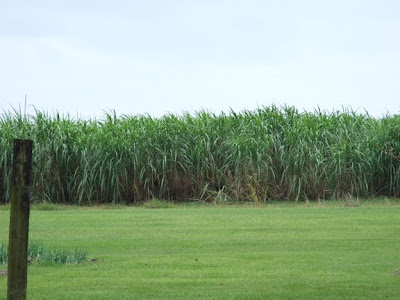 I am still kicking myself for not purchasing a jar of Laura pure sugarcane syrup.. But did pick up my favorite new cookbook in their gift shop - River Road Recipes: "The Textbook of Louisiana Cuisine". It is loaded with Southern staples that I can not wait to get fat making and enjoying. 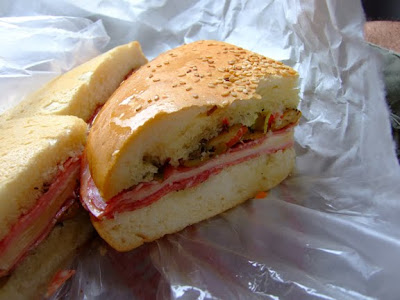 After the tour, a magical treat was uncovered back at the car. Before we left Peter had picked up a giant muffaletta at Central Grocery Co. for us to share. I was stoked to compare the "original" muffaletta (Signor Lupo Salvatore, owner of the Central Grocery, claims to have invented this sandwich in 1906 when he started making sandwiches for the men who worked the nearby wharves and produce stalls of the French Market) to the one I had tried previously at Napoleon House. No question, this sandwich from Central Grocery was far superior! Moist sesame bread, tender meats and cheese with just-greasy-enough-to-be-awesome-and-not-sinful tangy olive tapenade. Perfect balance. We also munched on several bags of Zapp's Louisiana potato chips as we pulled back onto the main road, that rain we'd been promised appearing from nowhere and pelting the windshield, misty sheets sweeping across the sugar cane fields outside.

Darkness fell over the French Quarter and the anticipation over our big splurge dinner was teeming. We had reservations at Susan Spicer's acclaimed Bayona. I was practically skipping on the wet bricks as we clambered through the corriders in the rain, bumping umbrellas and shouldering the icy runoff (hard to believe it had been 84 degrees that morning!). 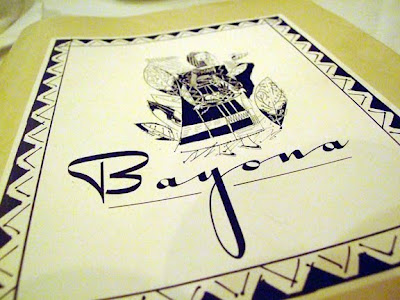 After shaking off the rain, we were lead upstairs to a round table in Bayona's wine room. We stuck by the classic and ordered a round of Sazeracs, which were dreamily perfect. 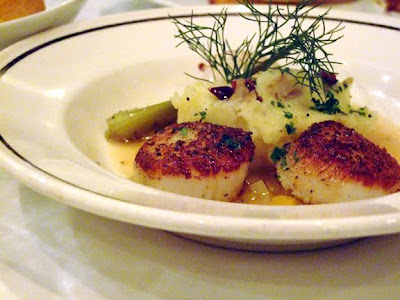 We decided on three appetizers, starting with the seared sea scallops with baby fennel, barigoule (a Provençal mushroom), Kalimata olives, thyme, and orange. Refreshing and balanced! 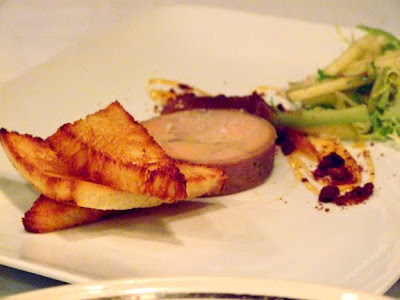 Next, the foie gras torchon with apple butter, cider vinegar caramel, brioche and celery salad. I will admit it, I do not love foie gras - but this was quite delightful and may start me leaning. A flawless plate. 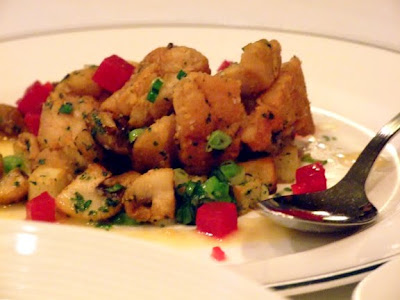 I was nervous about the veal sweetbreads in lemon caper butter, but our affable server convinced me that if I was curious, this was the place to try it (and that it doesn't get any better!). Plus I had already established an adventurous mission for myself this week, so sweetbreads it was! The cornmeal-fried bits were not untasty, delicately seasoned and rather enjoyable. Done and done! 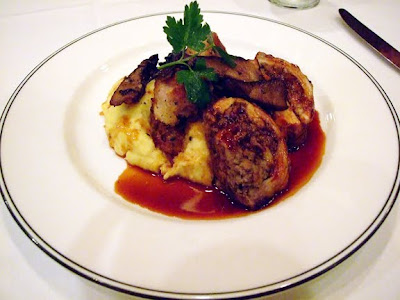 On to the big guns. I ordered an '06 Fiddlestix Pinot Noir once I decided on my entrée, the rabbit duo. This gorgeous plate consisted of a liver and bacon-stuffed rabbit roulade, paneed leg, with portobello mushrooms, marsala sauce, polenta, and Lacinato kale. Holy delicious. Though I adored my meal at Jacques-Imo's, this paneed rabbit leg was far more tender and lightly breaded, the roulade heavenly rich and hearty. 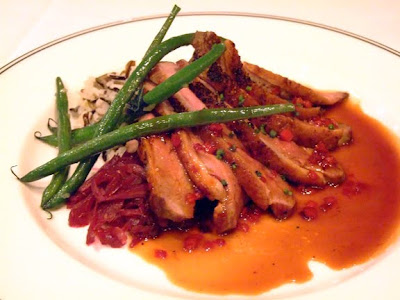 Alex ordered the grilled duck with pepper jelly and wild rice which was just stunning, moist and flavorful. 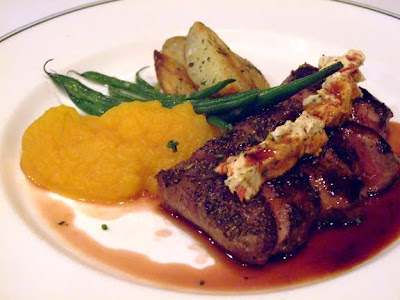 Michael ordered my runner-up, a peppered lamb loin with goat cheese and zinfandel sauce. It too was beyond satisfying. I didn't get to try Peter's pan roasted halibut with brussels sprouts, chantrelle mushrooms and sherry brown butter, but I could tell from his clean plate it passed the test. 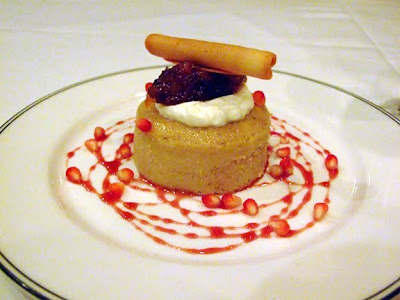 We finished with an espresso and two desserts to share. The semolina cake with autumn compote and fresh pomegranite seeds was super moist and not overly-sweet. An unexpected flavor that grew on me as I, well, finished it off! 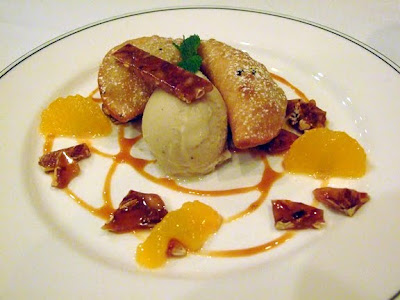 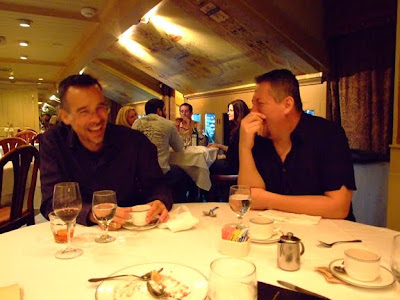 It was a lovely meal with great company and the best birthday present I could have ever asked for (thank you Michael!). After dinner we retired to the St. Philip for cocktails in the owner's flat and then off to Halloween 26's Friday night party. Yes, this is a life I could get used to!