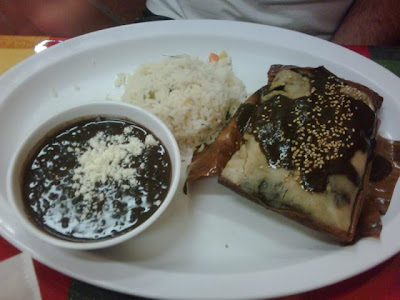 The best thing about Autumn is food. Not just harvest foods (though they rule), but how the body turns on in general to warm home-cooked meals, rich sauces and fresh baked goods. Everything is new again. What was too hot or heavy for Summer is suddenly enticing and exciting. While many might categorize Mexican cuisine as more "Summer", there's something about Oaxacan flavors specifically that fit quite nicely into the portfolio of Fall. Squash, cinnamon, pumpkin seeds, raisins and nutty bittersweet chocolate.. Robust and comforting flavor profiles that rival anything in your cooking magazine Fall issues.
I have sampled many Oaxacan mole negros living in the west/Southwest, always on the search for one better than the last. Recently I finally made it to an LA Oaxacan cuisine institution that did in fact give my mole negro list a run for its money, but also created a whole new running.
Guelaguetza on 8th street in Koreatown taught me that the best things in life are often free.
Upon entering the two storefront-sized brightly-lit cafe, my friend David and I were waved in to take a seat in the dining room at one of many shiny, colorful oil cloth-covered tables. Then a large plate of warm chips covered in a red sauce and crumbled white Oaxacan cheese was set before us. Eyes wide, we thanked the man and sampled our amuse. In synch our eyes shot up at each other and met, sparkling. "Yummm," we said in unison. This wasn't a cheapo enchilada sauce that many LA restaurants drown their chips in and microwave with cheese, calling it nachos. No, these were crispy light fresh chips, the sauce was a sweet and luscious red mole complimented by the salty crumbled queso fresco. Before our waiter was back to take our drink order the plate was clean. We bashfully ordered our drinks, David their Horchata, uniquely topped with nuez (chopped nuts) and tuna (cactus fruit puree). I was intrigued with the Chilacayota - A sweet drink made from "a special squash", cinnamon and dark brown sugar. The waiter assured me it was delicious. It was! Strange texture aside (somewhat of a spaghetti squash, so some trouble with the straw), the flavor was delightful, and quintessentially autumn. 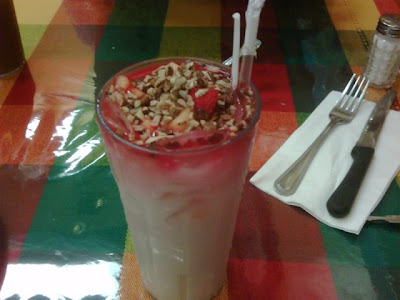 I was completely overwhelmed with the food menu. Oaxacan specialties are my absolute favorite and this menu was out to push me over the edge. As the waiter hovered nearby, sent away several times while we agonized, I basically closed my eyes and pointed to make a damned decision. It was the Tamal Oaxaqueño de Mole con Pollo - A banana leaf-wrapped tamale filled with shredded chicken in a mole negro made from chiles, nuts, seeds, spices and Oaxacan chocolate. No argument from me there.
David was still obsessing over our second plate of chips in red mole, so asked the waiter if that was the same sauce on the Coloradito con Pollo. It was, so he ordered that, chicken covered with Oaxaca’s famous red mole, topped with "string cheese". Unsure what exactly that meant (mozzarella?) I was curious what he would get.
As expected, I couldn't be more pleased with our meals. The tamale was tender and satisfying, moist flavorful chicken layered with steamy white masa and a focused, rich mole. David's was in fact covered in a string cheese, but this was a Oaxacan specialty I had never seen - literally white cheese teased into stringy stiff curls and piled into a mountain atop the chicken and mole. It was chewy and delicious, like salty cheese curd in "string" form.
The waiter asked how everything was with a grin because he was confident we were pleased. I can tell that is the common reaction here. I then noticed that everyone dining in the room was jovial and upbeat, as this is a place that celebrates the fun of food. It's not for ambiance, a scene, or to be seen... It's for hardcore food lovers.
By the time we paid the bill, our waiter was showing us his new tattoos, calling us "friend" and saying "see you next time, eh?"
He sure will.