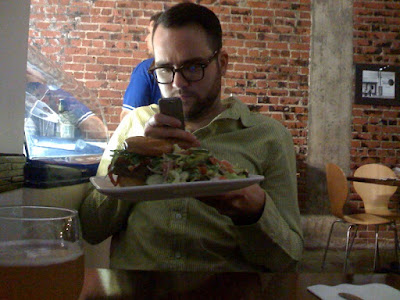 This is why I would benefit from an iPhone.
Guess who keeps forgetting his camera when eating out? Hmmm!
No, instead I meekly accept my friends' offers to use their iPhones and email me the pics. Thank you friends!
The Golden State is a great place to go with good friends such as these. Inside this simple brick-walled storefront in Fairfax Village across from Canter's (but perhaps more akin to neighboring businesses Family Bookstore and Silent Movie Theatre), you'll find zero pretension, good beer, and a friendly family of local food providers under one roof. Whenever the owner is the dude behind the register suggesting the special and which beer to have with it, you know you're in good, humble hands. Such was the case when my last visit resulted in the tastiest lamb burger and Greek cucumber slaw I've ever had (a special sadly - that hopefully they will bring onto the menu!). Casual to the core and all about what tastes good, this is a cafe based around a philosophy of admiration and local pride:

The Golden State is a talent show for the best makers of food and drink in California. We love Samir's food. We love Scoops gelato. We love breweries like Craftsman and wineries like Topanga Vineyards. We think products like these deserve a stage of their own. California is an easy place to love. It's where we grew up. It's what we know. And it tastes very good.

It sure does! My sweet and juicy lamb burger was perfectly cooked, nicely balanced with drippy feta, roasted red pepper and supple brioche bun.. dare I say a slightly more substantial take on a flavor-packed Umami Burger? As a compliment, I dare! The crisp Persian cucumbers of the lemony Greek side salad were only trumped by my friend's side, a refreshing jalapeño slaw (shredded red and green cabbage, carrots, jalapeño, red wine vinaigrette). For the sausage lover, they serve CA's best Let's Be Frank dogs. I had a crisp Allagash White beer with my burger, and duh, they have the best beer float in town (Rasputin Imperial Stout and Scoops' Brown Bread ice cream - yes, we had one for dessert, and you should too).

Photo by Cat
Posted by Nathan Hazard No comments: 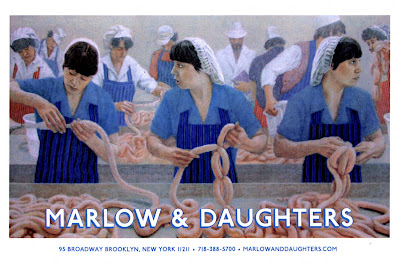 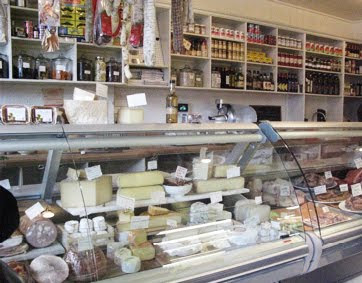 As if Mark Firth & Andrew Tarlow's South Williamsburg empire wasn't impressive enough, they furthered Marlow & Sons' storefront market approach enlisting their butcher Tom Mylan to open a full service butcher shop and gourmet fromager just a block east of the Marlow/Diner compound, appropriately ordained Marlow & Daughters.
Farm fresh produce sits in fruit boxes out front and small batch canned goods line the white wood box shelves inside. A monochromatic still life of supple artisan cheese wedges and wheels lay comfortably in a cooler case beside fresh sausages and cured meats. Hungry or not, this epicurean Eden will make your mouth water.
It was now Sunday (two days after the rooftop extravaganza) and we had organized a group outing to picnic on Governer's Island. Provisions were needed!
We descended on Marlow & Daughters like starved seabirds, added urgency as we realized our morning lackadaisicalness could risk perhaps, literally, missing the boat.
The cheese was tough to tackle, it all looked and sounded amazing. When in doubt, ask your cheesemonger. We decided to get two contrasting selections from the case, settling on a Twig Farm washed rind soft goats milk "fuzzy wheel" from Vermont (full-flavored and incredible) and an Appalachian cows milk cheese from Meadow Creek Dairy in Virginia (mild and buttery). We also got a parcel of Sopressata tipo Toscano from NYC local Salumeria Bielesse. A fresh baguette, bushel of Gala apples, and a block of Ski Queen Gjetost (a unique brown cheese from Norway with a fudge-like texture and a sweet caramel flavor) and we were out the door, filled 'Diner' canvas market bags on our shoulders (ah, and my one trip souvenir).
We boarded the ferry to Governer's Island at the Southern tip of Manhattan, near the Ellis Island ferry (for complete ferry schedule and details go here). Once we got on the boat we were mere minutes from another world, a little slice of colonial Virginia; Grassy fields, forts, oak trees and military estates. We staked out a spot beside an empty moat and laid out our fodder. Our tasteful guests who joined brought petite wine grapes, almonds, crisp Rielsing, Rosé and Prosecco, and last but certainly not least Dean & Deluca macarons! 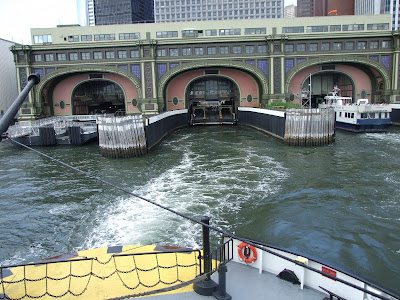 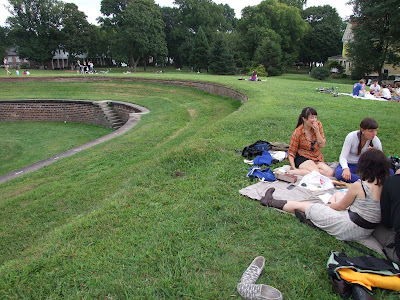 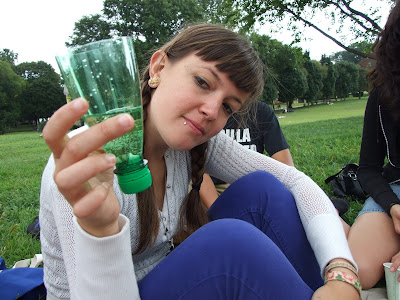 We ran out of glasses... voila! 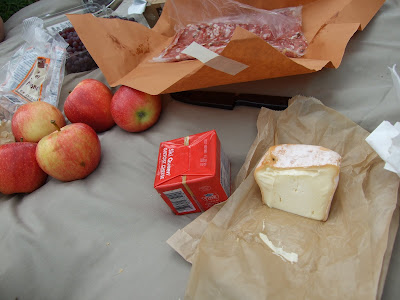 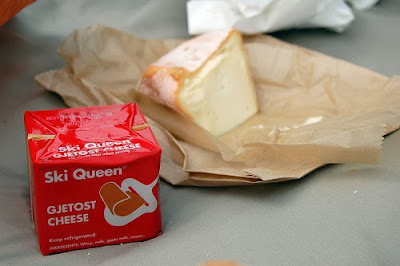 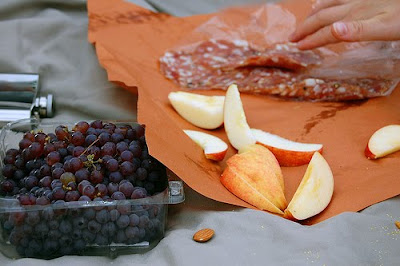 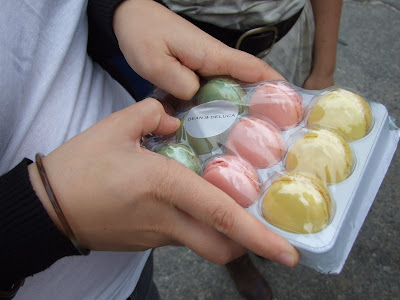 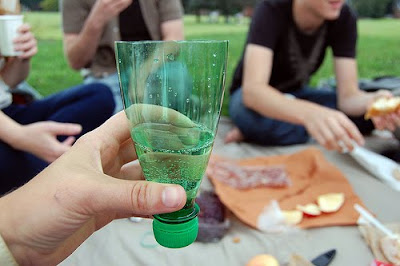 Toasting to a lovely afternoon! 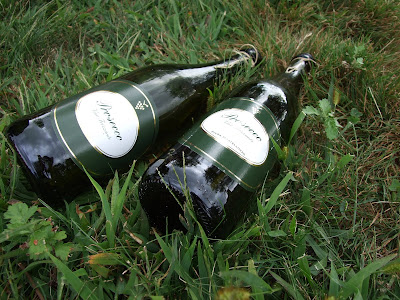 some photos by brooke
Posted by Nathan Hazard 2 comments: 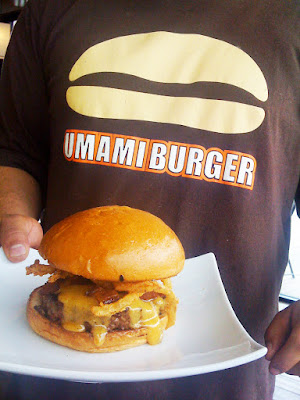 It's official. Rad burgers easily accessible in my O.G. LA stomping grounds.
Umami Burger opened its hotly anticipated second location Friday in Los Feliz, a 50/50 collaboration between Umami's Adam Fleischman and restauranteur Steven Arroyo in the former Cobras & Matadors space on Hollywood Boulevard. The attached bar Salaryman is open serving a selection of Japanese beer.
Wtf are you waiting for?? 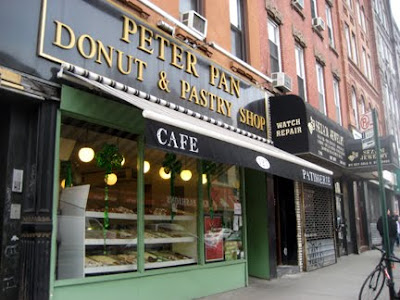 "OMG!" Brooke stopped in her tracks as we strolled down Manhattan Avenue in Greenpoint. "We have to stop and get a donut here!"
This was not my first inclination immediately following a very filling eggy potato leek hash and bloody mary brunch down the street at Enid's. But this bakery did stick out among the countless Polish bakeries on the street. A vintage sheen of mint green and white glowed from inside, the smell of fresh baked goodies wafting in our direction as customers bustled in and out of the cramped kitschy time capsule. Plus it's called Peter Pan, for chrissakes.
"Oof... Maybe for later..." I agreed in defeat, and opened the door for her.
Within seconds I knew we had made the right decision. Red Velvet cake donuts??
"This is my favorite donut shop in the city," Brooke elaborated. "They make ice cream sandwiches on those red velvet donuts." Heart. Melting.
Sadly I could not comprehend consuming a melty treat at the moment so opted for a plain red velvet donut, French cruller and sour cream glazed. By the time we made it the 10 blocks or so to the Brooklyn waterfront park, Brooke and I were digging into the bag for our treats. The morsels were tender and delicious. Dessert after breakfast never tasted so sweet. 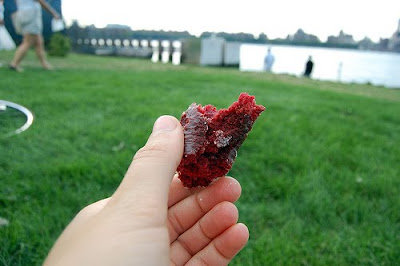 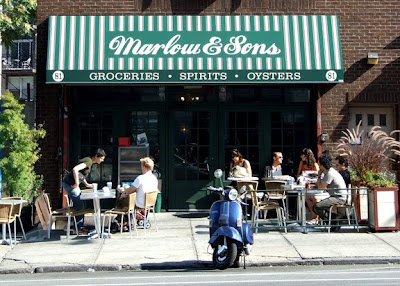 For the past several years, no trip to New York has been complete without one quiet modest dinner or simply a glass of wine in the shadow of the Williamsburg bridge at Diner. Also a fan of owners Mark Firth & Andrew Tarlow's [now closed] Mexican loveletter Bonita, I had yet to try Diner's next door neighbor, and other sibling Marlow & Sons.
I've heard about the quaint storefront for years, where an old college friend worked for a time, known for their oysters, "confectionery, spirits"...and their oysters. 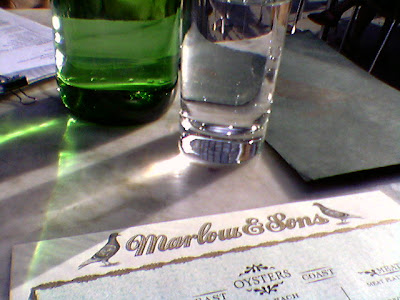 I'll get this out of the way now, in my developing palate for all things sea-grown --Yes, I'm still finding my sea legs.. or sea tongue?-- I have always been too tuna (get it? chicken of the sea?) to try a raw oyster. Yep! Never had one. I've worked at several Northwest restaurants known for their excellent oysters, and passed up the opportunity. For shame!
The top of the Marlow menu touts $2.75 East Coast oysters. I had a secret goal for the week.
Yes, that means that Marlow & Sons was not to be a one time stop. My hosts frequent the storefront daily as their neighborhood coffee shop and bakery, other assorted sundries (including Portland's Stumptown coffee) available in the front part of the shop, the back room a dim speakeasy-looking dining room and bar.
Battling my exhaustion after flying in day one, Mikey took me down the street for coffee, a bite, and eventually a beer on Marlow's sidewalk patio.
After our espressos we sampled a couple of executive chef Sean Rembold's appetizers. The Crostini with cranberry beans, escarole, and shaved aged goat cheese was salty, rich and satisfying. 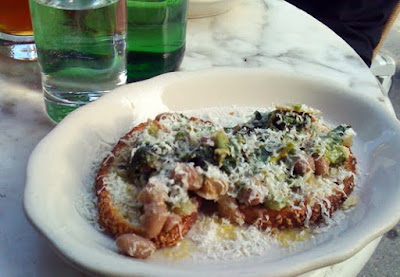 The deep-fried corn on the cob with spicy lime aioli and cilantro on the other hand left something to be desired; the frying had dried out the kernels a bit. I found myself enjoying the aioli more than the cobbs themselves.. 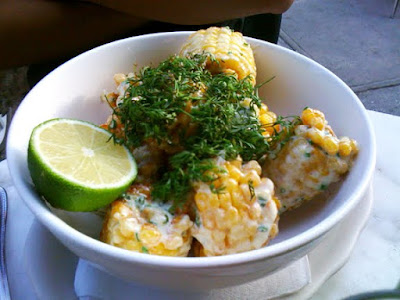 I moved on to the Parmesan broth with mustard greens, onions, croutons, which hit the spot for a breezy afternoon snack. The cartoon-canned Porkslap pale ale was a nice match, a flavorful amber tinted ale with some edge. 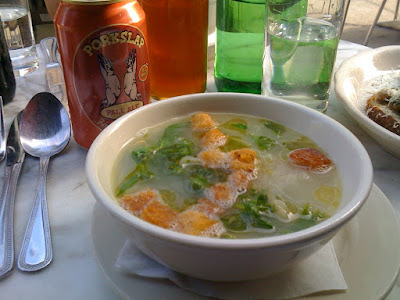 The day following the rooftop extravaganza, we slowly met for a casual hangover brunch in Greenpoint and a stroll to the Brooklyn waterfront park where we lounged in the grass all afternoon. As the sun set behind dusky clouds, said college friend (and Marlow alum) suggested oysters to start us off into the evening right. We congregated outside Marlow & Sons just as the dinner rush began. We filed into the back and crammed ourselves alongside the bar for a beer while we waited. I was very pleased with my pint of Pennichuck Feuerwehrmann Schwarzbier, a "black lager"; light bodied dark beer with a clean, crisp, refreshing finish. Luckily a long wooden table opened up for us relatively quickly and we slid into our cozy spot.
A round of Maine oysters were ordered immeditaely. I began to get a tingle of excitement. The oysters were large and gorgeous, served on the half-shell with lemon wedges and a shallot mignonette. Without a moment's delay everyone raised a shell in a hearty toast and down the hatch! The exhilaration of the moment trumped any previous anxiety, as the fresh oceany brine hit my palate with surprising favor. Lovely! I didn't have to wonder, these were very very good oysters. Before I knew it, we were raising another oyster, an excitement in the air so palpable we could feel it on our smiling lips.

We decided to stay for dinner so turned our attention the the blackboard on the wall beside the table. The choices are slim at Marlow & Sons, but since there was already and air of trust it really just made it easier to decide. I started off sharing the Panzanella, which was a decent bread salad rendition (but in all honesty prefer my own). Next was the popular Brick Chicken (chicken cooked under a brick), deliciously tender and flavorful, perfectly crispy skin and meat that slid off the bone. A fully satisfying, homey dish (although I must say, like a duck confit a tad on the greasy side). A round of desserts arrived on the house, the clear stand out being the famous chocolate/caramel torte sprinkled with gray sea salt. Divinity! (AND you can get the recipe here!)
We left full and happy, taking a long walk in the brisk night, eventually picking up some Belgian beer to return home with and visit late into the night. 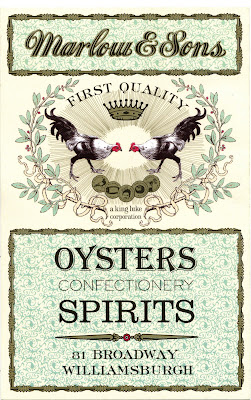