I suppose I was a bit of a comic book fan in my early adolescence, filling my lazy pre-driving summer days with swimming, daytime television, and reading comic books. It's been some time since I've been 'pulled in' by a comic, er graphic novel (sure y'all, it's totally the same as reading a book); the Watchmen covered in dust, half-read on my nightstand since before the film version went into pre-production. But something caught my eye the other day. Positive I'm not alone in noticing recently everyone's obsession with good eating, dining, and the term "foodie", I was still surprised to see it cross over into the comic world.. Kind of.
Enter Chew.
Learning about this twisted, culinarily-effed-up near-future comic via an NPR write-up, I decided it might be time to give the comic shop another try.
I picked up a copy of the new issue #3 the other day at Secret Headquarters (Chew is already into its fourth round of reprints due to mad popularity, thus issues 1 and 2 are on back-order). The art by Rob Guillory is immediately delectable, the bizzaro story from John Layman (Marvel Zombies vs. Army of Darkness, House of M: Fantastic Four and PUFFED) chock full of clever devices and laugh out loud audacity. So what is it about exactly, you ask? OK, well like I said while it's loosely based on the food world, don't blame me if you lose your lunch:
Chew is set a few years in the future, after the government has declared chicken illegal in the wake of a bird-flu epidemic. Under this Poultry Prohibition, a black market thrives; chicken speakeasies are everywhere.
We meet Tony Chu, a detective who happens to be a Cibopathic, meaning he gets psychic impressions from whatever he eats. A bite from a piece of fruit can tell him the life of a tree, a burger the grisly end of a farm animal, and well, on the crime scene... You get the idea where that may lead (oh, and it does).
Then Tony meets a food critic who possesses a gift similar to his own - she can write about food with such precision and vividness that readers of her column actually experience the flavors and aromas she describes. The problem - she's grown disillusioned and has decided to only review restaurants poorly rated by the health department, literally sickening everyone who reads her reviews. For Tony, it equals love at first sight.
Check out some clips of the tasty art below, and inquire with your local comic book store if they do indeed have any morsels of Chew left, or when the new batch will be out of the oven. 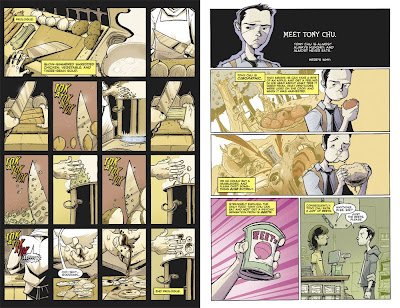 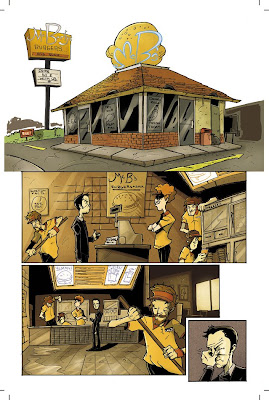