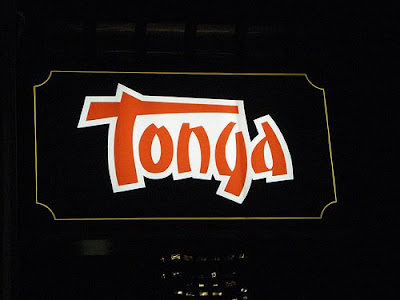 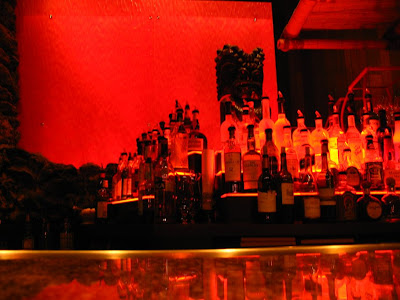 Hidden in the depths below Nob Hill's palace hotel the Fairmont, a relic housed comfortably for decades may just be heading off to the pawn shop. Behold the endangered Tonga Room, San Francisco's prized jewel of the Tiki underground.
Let me take a few steps back and start off by saying that I have a mega soft spot for all things Tiki. Classic grog recipes in the Beachcomber and Vic styles, kitschy Polynesian dens that skate the line between novelty and dive, Easter Island aesthetic, pu-pu platters and a year-round celebration of Summer love... Spawning among many things a contemporary cult California art movement, Tiki is for many a lifestyle, and practically a state of mind. I enjoy my nights at Los Feliz's Tiki Ti, Tucson's Kon Tiki, and Portland's Alibi, have a renewed appreciation for fruity cocktails and bartend my parent's annual summer Tiki parties, but stop just short of the Hawaiin shirt.
Despite its popular resurgence in recent years however, Tiki has suffered significant decline, especially in the closing of many Tiki [bar] institutions, such as the close of the original Trader Vic's in the Beverly Hills Hilton. Most of those kooky old Tiki themed bars and hotels in the coffee table books you see are now generic motor hotels and Chinese restaurants - or flat out gone, bulldozed for a contemporary neighborhood makeover. Just now when it seems popularity could save this species, reality proves it may in fact be time for a Tiki historical society.
OK, so back to San Francisco. Sitting in Dolores Park on a sunny Sunday, I hear some of the folks I'm hanging with are going to the Tonga Room that evening. Sounds Tiki, so I inquire further. They explain that the Tonga Room is a must (especially since it is going to be closing soon) and is the Granddaddy of the bay's Tiki set, situated in the basement of the historic Fairmont Hotel where it's existed since the late 1940s (the hotel's history overall really is quite interesting). The large room which once housed the 'Fairmont Plunge' pool debuted in 1945 as the S.S. Tonga, featuring a live band-carrying boat in the middle of a pool and a dance floor made from the actual deck of the S.S. Forrester ("one of the last of the tall ships that plied the route between San Francisco and the South Sea Islands"). 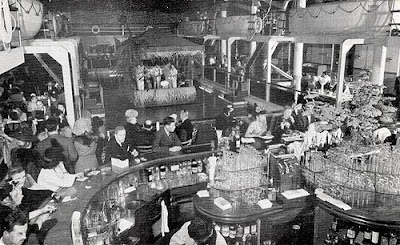 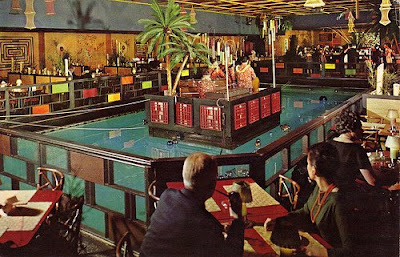 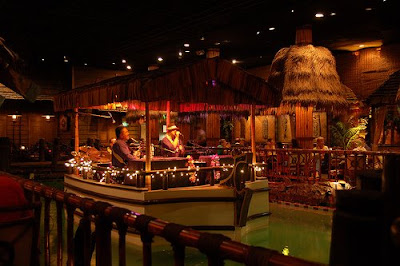 The Tonga today.
Naturally I was game, and excited to expand my Tiki repertoire. I have to admit though that following my deck sunning and champagne drinking at Medjool earlier in the day and a quick stop to slug a gimlet and see a friend sing at Martuni's, I was not altogether sober arriving to the Tonga Room (hmm, blurry photos). But boy did I gasp walking from the elevator and the sterile hotel hallway into this dark and lush Tiki behemoth. As I ordered a Scorpion (to share? I may have had this on my own...), the live band's boat floated toward the back wall and the lights dimmed. Thunder boomed from invisible speakers and Disneyland lightning cracked through the dark. Holy crap, a storm was hitting - And it was suddenly downpouring inside the freakin' bar!Before I knew it, the boat and band were back in the water, a friend and I were ballroom dancing on the deck of the S.S. Forrester, and either I misplaced my Scorpion, or I drank two... But it really was the most amazing time! 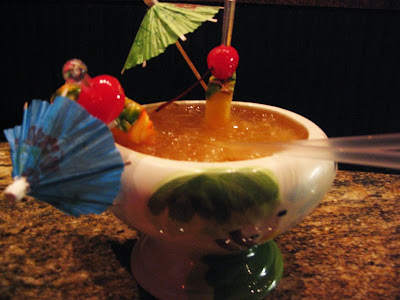 Back in LA, I did a little research on the rumors about the Tonga Room closing soon. Laughing Squid and Tiki Central Forums confirmed the rumor, citing that a new hotel construction plan would replace the existing Fairmont Hotel Tower with a new residential condo tower. The Tonga Room, at the base of the existing tower is missing in the envisioned building plan... replaced by a new grand ballroom. Hotel officials have claimed that no construction will commence until 2012, but the Tonga's devout followers have already started to rally to save it. A New York Times article brought the issue national, with pages like Save the Tonga Room popping up online garnering surprising support. The city has yet to get involved, and for now it looks like the Tonga's days may be numbered.
As I sat that night and took in the grandeur of the room, my sentimentality kicked. This was one of the most impressive bars PERIOD. While the idea of this piece of cultural history disappearing is distressing, I felt very grateful to be experiencing it, and as the cap to a really perfect San Francisco weekend.
Fitting it is, I thought, that Aloha means both hello and goodbye..