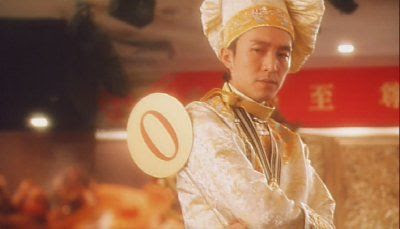 Join me for a late night treat this Friday at my favorite movie house in LA - the Silent Movie Theatre. Brilliantly run by the Cinefamily, this month's FRIDAY MIDNIGHTS series ("Far East Funnies") is going culinary slapstick.

Those familiar with Chinese box office powerhouse Stephen Chow only through his recent import releases Kung Fu Hustle, Shaolin Soccer and now CJ7, will be in for a pleasant surprise with this rare showing of his comedy masterpiece. God of Cookery, a send-up of the Triad gangster genre in the gag-a-second style of Mel Brooks, is shot through with a lethally black sense of humor, full of delirious wildly-paced physical comedy and dense pop culture references, and is filmed in gorgeous 35mm 'Scope. Chow plays the ultimate Iron Chef, a culinary con humiliated by a competitor and deposed (literally) from his throne. From there, it's a steep climb back to the top, as Chow navigates culinary gangs, Shaolin monks, hit men and divine intervention itself in this one-of-a-kind slapstick genre stir fry.