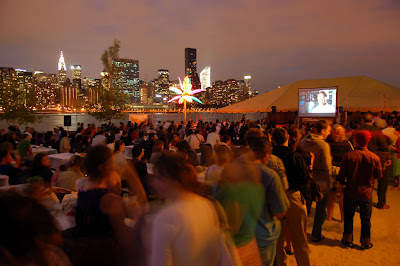 Simply put on their site, the NYC Food Film Festival is a multi-sensory experience where film-goers are able to watch food films then sample the food portrayed in those films. In its third year, Harry Hawk and George Motz in association with the James Beard Foundation have created quite the host of scrumptious films and matching food, peaking with a special screening of Buitoni's 1996 food film classic Big Night (starring Stanley Tucci and Isabella Rossellini), Thursday, June 18th at the new South Street Seaport Water Taxi Beach. Admission to this and all other beach screenings are FREE.
View the 2009 NYC Food Film Festival Trailer BELOW