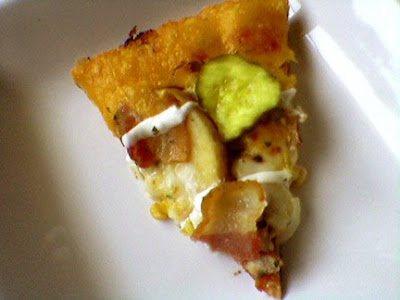 The first time someone tried to explain Mr. Pizza to me I thought they were seriously pulling my chain. A Korean pizza chain (with only ONE location in the United States - on Wilshire in K-town right down the street from the Wiltern), Mr. Pizza Factory is an intriguing "take" on the loose "idea" of pizza. 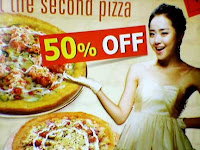 Don't go expecting anything.. authentic. Rather, imagine a far east pizza joint based off of.. Super Mario Bros. and refrigerator leftovers, and you're halfway there. Their wacky Korean website has a baffling "Women" theme.. the Mr. Pizza tag-line apparently "Love For Women."
It's really the everything-but-the-kitchen-sink way of building pies that gets American folks (and my) attention. More or less their signature pie, the mystically titled Potato Gold is really what to order at Mr. Pizza. The "screen" (traditional) and "tortilla" (thin crust) pizzas get overwhelmingly blah reviews from American diners, it's the exotic bits that are worth going out on a limb for. 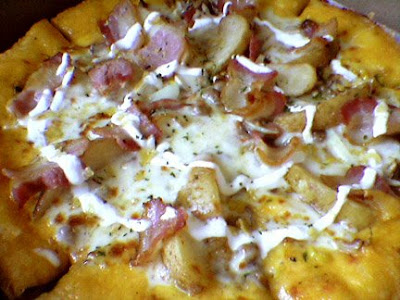 So what is a Potato Gold pizza? It starts with a "salsa" base (regular tomato sauce) on a sweet potato crust, piled high with thick cuts of bacon, hefty potato wedges, ground beef, corn, onion, mushroom, nacho chips(!), and sour cream - but here's the kicker - the crust is stuffed with sweet potato mousse, and the whole enchilada is covered with crispy cheddar cheese, and a side of sweet pickles of course. Sounds pretty intense, yeah? It is. Though one "Large"(13") pizza runs a steep $23.50, know that one slice may just be enough here. And gosh, two birds, one stone - dessert is built right in! The crunchy sweet potato finishing bites are pretty much the best part.
So the next time you crave something about as Italian as Porco Rosso, or don't know what you feel like eating.. Heck, just eat everything. On one sweet potato pie. 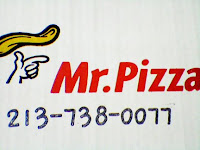