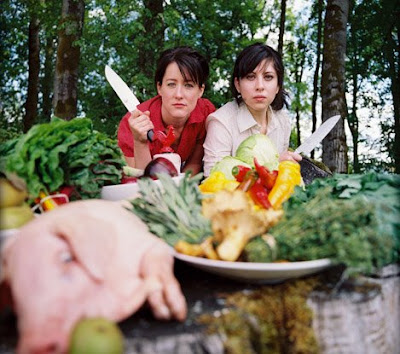 First noticed on a National scale for her former Portland, OR-based catering company Ripe's innovative and cultish Family Supper, followed by several years of holding poise following the crumble of business empire (and marriage) with partner Michael Hebb, Naomi Pomeroy has made it clear she's only just getting started. Her newest endeavor, Beast, is a cozy innard-pink-painted space in NE Portland opened in September '07 with business partner and sous chef Micah Camden (think of Beast as the big sister to LA's Animal - of which, coincidentally, chefs Jon Shook and Vinny Dotolo joined Pomeroy this year as winners of Food & Wine Best New Chefs of 2009).
Beast hosts two nightly seatings (6 and 8:30 pm) only, during which you'll enjoy a six-course prix fixe meal of masculine-feminine meat-centric seasonal fare "inspired by French grandmothers" ($52), all prepared in a tiny open kitchen with two gas burners, an oven and a prep table. Pomeroy has opted to keep things intimate - but unlike the bustling, invite-only, catered vibe of Family Supper, with Beast Pomeroy is more welcoming you for a low-key, memorable meal in her home.
This Sunday June 14th, Beast is hosting the second in their series of six Summer Wine Dinners. This week will feature guest Tad Seestedt of McMinnville's Ransom Wine Co.
6pm.
24 seats only.
$95 per person Including all food, wine & gratuity.
Reservations Required. (By telephone only) 503.841.6968

Menu and Wine Pairings for the dinner will be: