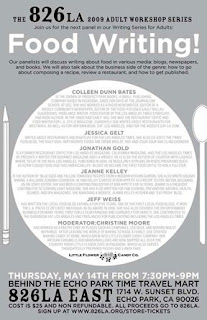 I pulled up to the curb outside of the Echo Park Time Travel Mart on Sunset to see a smartly primped crowd brewing out front of the small concept shop. I could tell I was in the right place for my first schmancy 826LA adult writer's seminar series event. The topic tonight: Food Writing! I know, how could I NOT go? I was entering my CC number into Paypal before I even read the names of the panelists - a healthily diverse and exciting selection skimmed from the upper crèmechelon of LA's rich food writer pool. Jonathan Gold was the glaring text that brought sweat to my upper lip. Really? In person? (I could pass Drew Barrymore at M Café without flinching, but the idea of being the same room as the Pulitzer-winning man behind Counter Intelligence makes me woozy?) Yes, it was ON. As I continued down the list, it was one more "Oh!" after another, a veritable menu of superstars.
I had read panelist Colleen Dunn Bates many times (the surprisingly hip restaurant reviews in AAA's Westways magazine), without realizing she was also the woman behind Prospect Park Books, the LA foodie guidebook Eat: Los Angeles and corresponding blog eat-la.com. Superblogger and LA foodie fixture Pat Saperstein of Eating L.A. got me pretty excited as well, a fellow "blogger-on-the-side" (um who seems to get EVERYWHERE) who is largely responsible for paving the road for us LA-based online food writers the past 10 years! Jessica Gelt looked familiar before she shared her role as nightlife writer and co-editor of the LA Times cool food blog Daily Dish, but that's because I've seen her rock out many times before on the bass with her band of East-side heroes The Movies! I am embarrassed to admit I wasn't previously familiar with French culinary and fresh eating wunderkind Jeanne Kelley, a confident young woman who traveled the world to grow her chops in the kitchen, put out her book Blue Eggs & Yellow Tomatoes: Recipes From a Modern Kitchen Garden last year, and also manages the blog Eat Fresh. Finally, the conversation was moderated by likable caramel-making front runner Christine Moore of Pasadena’s Little Flower Candy Company.
It may have been just too much awesome for one room. Especially after looking around, seeing familiar faces in the audience that I knew belonged to fellow food bloggers, several of which should have been on the panel themselves. Curious how Moore was going to direct, she dove right in letting each panelist share their lives and relationships with food, which pretty much molded the remainder of our short hour and half - Surely we could listen to J. Gold talk that long alone! Though Q&A began too late, with a few silly questions that kicked up trodden ground, the night was still not without a few good laughs and anecdotes. When asked if he took notes when dining in a restaurant for a review, Gold huffed "it's like taking notes during sex!" Saperstein smiled wryly in her quiet manner "...not exactly.." Gold later described the "felony" of a certain LA restaurant's molecular gastronomic deconstruction of a caprese, a thin slice of tomato ("out of season"), micro-basil ("the least flavorful"), but most memorably a syringe of ("textureless!") blended mozzarella that you *squirt* into your mouth (though Gold used a slightly more carnal - and less appetizing - word)..!
One person asked the panels' food writing peeves, and though I may be guilty of the "don't use French words when there's a completely acceptable English word"... (I always thought my tongue-in-cheek linguistic-decimation to be oddly charming!)... I DO promise to never use "eatery" in place of the word restaurant!
When Moore brought the conversation to an abrupt end it was much too soon, many hands left raised half-mast. But Gold's last sarcastic and theatrical comment in response to shock-value "extreme eaters" left an indelible mark on the room of tasteful hopefuls. "Look at me, I'm eating a uterus taco! WOOOOAAA!!!!"
Posted by Nathan Hazard