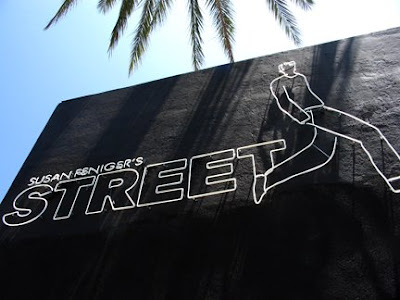 If you don't already, you will soon know Susan Feniger's name. If not for her LA food world fixture status from opening City Cafe and then City Restaurant in the 1980s with business partner Mary Sue Milliken, to their popular Food Network cooking show Too Hot Tamales, to opening signature restaurant Border Grill, then their downtown Latin bistro Ciudad... Yes, if not for that, you will know her name since she found out you can't copyright a common term (and original concept name) like "street," thus formally calling her newest restaurant, and first solo venture, Susan Feniger's Street.
After devoting nearly three decades to exploring and showcasing the culinary treasures of Latin America, Feniger's passion for world travel and the most 'common' form of unsung ethnic cuisine, street food, made clear what she was destined to do next: An unpretentious, interactive and affordable dining experience spanning continents in courses. The concept, albeit a personal triumph for Feniger, doesn't immediately sound like anything new. Foodies have been cringing at fusion cuisine since power suits bolstered clumsy shoulder pads. But the big question I had going into Street was in the cultural melting pot of Los Angeles, could a sit-down dining room introducing the concept of "street food" really be relevant? Fine-tuning street food in the best American city FOR street food?
The answer came as a pleasant, good-intentioned and satiating "sure, why not?"
From entering the spacious, minimal but warm dining room to a round of smiles preparing for the weekend brunch rush to the last of several gracious goodbyes upon leaving, Street was a comfortable, non-rushed and enjoyable dining experience, akin to a visit to your neighborhood coffee shop. 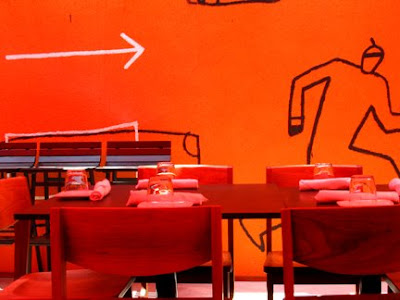 Though lacking greenery, Street's patio is vibrant, with orange and black walls covered with stick figure "graffiti", orange umbrellas covering sturdy wooden tables and chairs. A long narrow window along one wall with sliding doors above a metal counter is a clever and subtle nod to the street dining aesthetic. Our congenial server was more than prepared to ease first-timers into the concept and method by which to best enjoy the Street experience. The menu is split into numerous categories (which change surprisingly from brunch to lunch to dinner) of mostly sharable dishes, making the decision near-impossible. Categories include Tea Cakes & Dumplings, Salads, Noodles & Soups & Stews & Curries... Luckily the brunch and lunch menus offer a convenient any half salad & dumpling plate option, which helped us narrow it down while still feeling like we were getting a variety. As we whittled it down, our beverages of Cantaloupe & Beet Agua Fresca and (honey-kissed) Iced Chrysanthemum Mint Tea arrived, which were both incredibly refreshing. 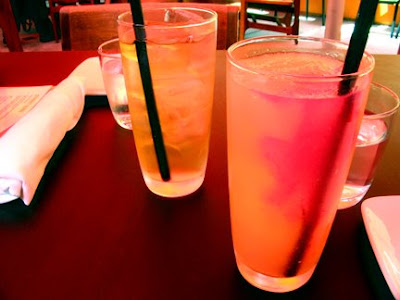 In general, I like -prefer really- to order together and share meals communally with my dining companions (especially when I plan on writing about it). I became concerned for a moment, realizing I was dining with a vegetarian whilst my eyes passed over items such as the Mung Bean Pancakes (griddled with anise glazed pork belly, scallions, and kimchi; with hot mustard sauce). YET was soon eased, shocked at how easily Street's menu made me feel completely satisfied with all of our choices - which were all meat-free (at most places not an easy feat!). 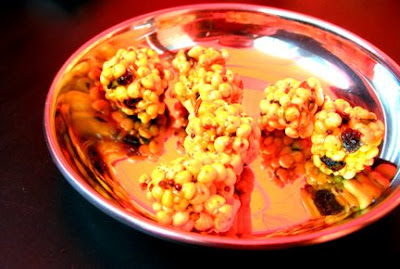 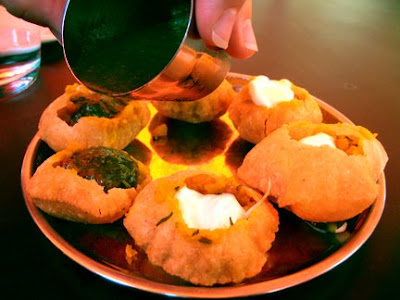 The Paani Puri came next, crispy puff nests filled with spiced potatoes, chutneys, and sprouted beans, served with a yogurt-cilantro water. The exoskeletal crunch was gratifying, traditional Indian spices and chutneys mingling nicely on the palate; A good starter. 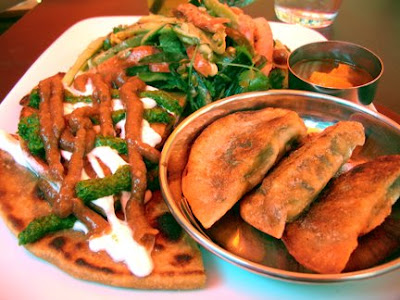 In perfect time, our half & half platters came out. The first had Mandoo Vegetable Dumplings, potsticker-style and golden fried, filled with Asian vegetables and "sweet potato noodles" with roasted honey yam and sesame dipping sauce. Probably the least-exciting offering we tasted, the dumplings were greasy and over-fried, the contents rendered immaterial in that mushy state. The coupled Indian Potato Flatbread with Baby lettuces was quite tasty; Spiced potato parantha griddled then topped with sprouted beans, lettuces, dates, tomato, and homemade paneer cheese with chat masala and yogurt dressing. You could say over-dressed, though opening dimensions of pleasing flavor, making clear that Indian cuisine is one of Feniger's absolute favorites (it is). 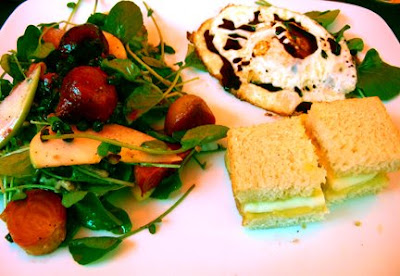 The platter set before me was a gorgeous sight, the Beet and Apple salad (of slow roasted beets with apple, black currant, watercress, toasted walnut, and millet croutons in a juniper vinaigrette) was something from a Bon Appetit cover shoot. The juniper vinaigrette, tart and refreshing is a fitting match with such a ripe and crunchy array of ingredients. The other half of the plate was my absolute favorite though. The Kaya Toast is "a uniquely Singapore experience" consisting of mini lightly toasted Malaysian white bread slices sandwiching slivers of butter and a thick spread of coconut jam; served with a succulent soft-fried egg drizzled with dark soy and a dash of white pepper. I was guided by our server (me imagining Feniger gingerly instructing her staff) to break the egg's yolk with the crisp bread. The radical combination of flavors is staggering, intoxicating, and indulgent. A moment which demands silence and literally thought in order to process. Immediately followed by craving and obsession. I ignored the other dishes as I relished in every tiny bite of the Kaya Toast, the creamy-sweet coconut encroached by pungent yolk and sharp salty soy and white pepper notes. The last taste left me wanting more. 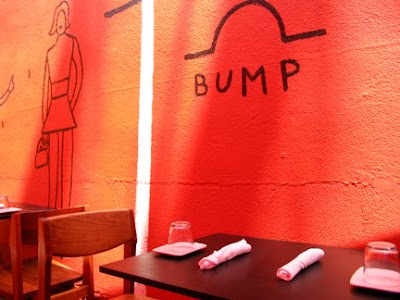 Though we weren't staying for dessert, the list made me sad we didn't actually see the Brunch menu (noon on Saturday I suppose is "Lunch", but had it been Sunday(?) some of the breakfast-friendly sweets would have been presented to us as options from the get-go). Case in point: the Turkish Doughnuts. By description, small spiced pastries fried and then simmered in a cardamom rose syrup served with sour cream and rose hip jam. Did you read that? Do you need to again? My heart sank, but gave me another reason to return. And now, thanks to the LA Times (yet again) for including with their Street preview the actual RECIPE (and even cooking show style video instruction by Feniger) for the Turkish Doughnuts with rose hip syrup! OK then, good compromise! Not only will I be back to Street, but I'll try my hand at the doughnuts and compare. 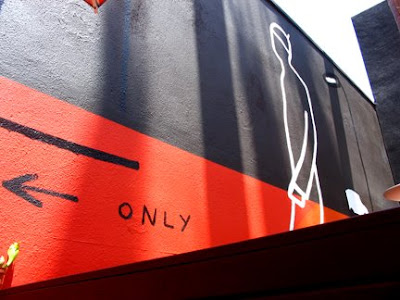 I have to say, overall my nonpartisan expectations were surpassed. The most common complaints I'd read so far about Street had been of overworking the simple and easy to come by (in LA anyway) dishes such as Beef Pho... but I guess my question for those critics is then why did you order Pho here? Personally as I diner I am always looking to expand my horizons, and further, if I want authentic ramen, you know I'm not going to order it in a fusion Asian shop in WeHo; I'm going downtown. Street's menu is bursting at the seams with exotic niblets I've surely never had prepared quite like this before or seen on many menus in town, and those are what I gravitate to... I have to defend Street here, after all, it enlightened me to Kaya Toast, and in Feniger's own words, "No one ever has enough Kaya Toast!"