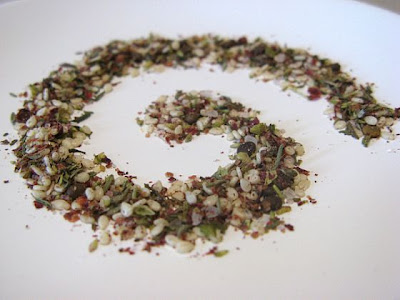 I've definitely mentioned my sister Megan's culinary prowess before, most recently the menu/recipes for her elaborate Southeastern Asian party spread. Here she guest-writes about her new favorite condiment (which I can't wait to try).

Last season on Top Chef, I remember a specific episode when one of the chefs had to re-create a fish dish that involved a piece of fish “blackened in za’atar”. I had never heard of the spice before (even the chef was not familiar cooking with the spice), but it looked great.
Then, this past weekend I was at the Canelo Hills Wine and Farm Festival in Sonoita, Arizona, where there was a woman selling spice blends that she put together herself. As I browsed of the little baggies of spices, one in particular caught my eye… Za’atar!
After the woman explained to me, all about this Middle Eastern blend and how to use it…I was sold! The next day I started doing some research about it and tried it in simple recipes.
As it turns out, za'atar is a very cool, exotic blend with a great history, that tastes great on just about everything! Here is some more information on what exactly it is, how you can make your own, and most importantly what to eat it on… Enjoy!

Za'atar (Arabic: زعتر‎), also spelled satar, zahatar, zahtar, or zatr, is a condiment made from a mixture of herbs and spices with Middle Eastern origins. Based on Syrian Hyssop which grows wild in the region (likely the hyssop referenced in the Bible; reminiscent of marjoram, thyme or oregano), za'atar has been used along with other spiced salts as a staple in Arab cuisine since medieval times.
Za’atar is also often known for increasing mental acuity! In Lebanon, there is a belief that this particular spice mixture makes the mind alert and the body strong. For this reason, children are encouraged to eat a za'atar sandwich for breakfast or before an exam. Maimonides (Rambam), a medieval rabbi and physician who lived in North Africa and Egypt, also prescribed za'atar for its health advancing properties.
The most common preparation involves using ground dried thyme, oregano, marjoram, or some combination thereof, mixed with toasted sesame seeds, and salt. Some varieties may add savory, cumin, coriander, fennel seed or sumac. Each Middle Eastern country has their signature spice added to the core recipe; for example: Lebanese Za'atar adds orange zest, Syrian Za'atar adds cumin and paprika, North African Za'atar adds marjoram, Jordanian Za'atar has spearmint and Israeli Za'atar adds dill weed. Due to these slight differences in recipe, the taste of a za'atar mixture can be tangy, herbal, lemony, nutty, or toasty.
Za'atar is a spice blend that is incredibly versatile. It is used as a seasoning for meats and vegetables as well as rice and breads. It can be mixed with olive oil to make a spread called za'atar-wu-zayt as a dip for the sesame bread rings known as ka'ak. Za'atar can also be spread on a dough base and baked as a bread, in which case it is called manaeesh bi zaatar. It can be sprinkled on labneh (yogurt that has been drained until it becomes a tangy, creamy cheese). In Israel, it is often used on pizza, and is commonly distributed in packets along with a delivered pizza.
So far my favorite use is to make a slurry of Chef’s Choice salted butter, good olive oil and the za’atar. I then slather it on a piece of Mediterranean flat bread or pita bread, and toast in toaster oven. It comes out hot, bubbly, lightly toasted and oh so good. It is a great way to really taste the za’atar flavors. 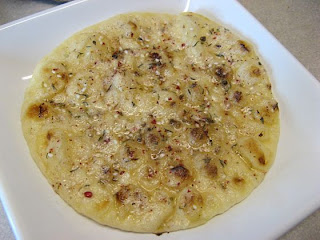 A few more cooking suggestions include: Blacken chicken with a layer of za’atar and coarse salt; Sprinkle it on salty white cheeses such as feta or Balkan and drizzle with olive oil, add some olives, tomatoes, and eat with a pita; Season fresh salads; Add to bread dough before baking; Rub salmon or halibut with it before grilling; Mix into your bagel’s cream cheese or even your scrambled eggs. 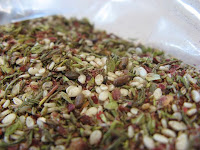 Grind the sesame seeds in food processor or with mortar and pestle. Add remaining ingredients and mix well.
Store za'atar in a cool, dark place in a plastic zip bag or an airtight container. Usually keeps 3-6 months. Many recommend keeping it in the freezer to increase shelf-life, as many seeds (like nuts) can spoil quickly.
Posted by Nathan Hazard