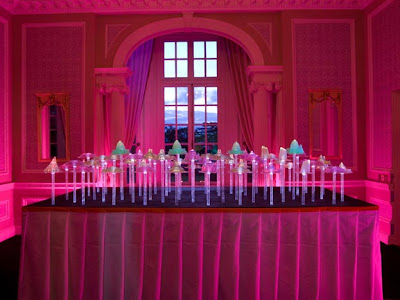 From a scale jelly airport model (with jelly planes) to glow-in-the-dark jellies to an entire Christmas feast made from jelly, and with clients the likes of Gordon Ramsey, the young Mr. Bompas and Mr. Parr, students of Eton and University College, London are well beyond revolutionizing common Jell-O molds, they're elevating it to Art.


"We know from history that jellies were once considered to be the pinnacle of sophistication,” Mr. Parr said. “They were used as very lavish centerpieces, the way marzipan and sugar were used, but then jelly became corrupted by children’s parties.”

They design three-dimensional models on a computer, eventually producing the custom molds in high-impact polystyrene plastic. But concocting tasty flavor profiles and gorgeous pigments are a bulk of the work, not to mention engineering and chemistry (after successfully making jelly glow blue with quinine, the boys are on to experiments like growing crystals inside the jelly). 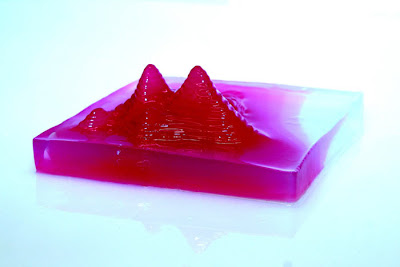 You may recall my post last year on the rise of chewable cocktails, and Bompas & Parr are no rookies there, since taking private commissions they've made Courvoisier jellies for their Future 500 party and layered Campari and orange jellies for Filippo Tommaso Marinetti’s “Manifesto of Futurism” 100th Anniverasary celebration. The Jelly Boys were gracious to share these Campari and Orange jelly recipes with the NYTimes, which you may layer or simply serve together for wobbly alchoholic delight. 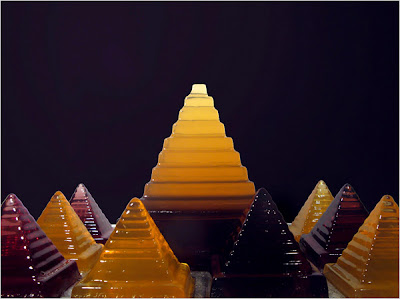 But their current project really knocks my socks off, taking the evolving cocktail to a WHOLE new level.. If you find yourself in London this month, be sure to check out Alcoholic Architecture, Bompas & Parr’s walk-in cloud of breathable cocktail ("Step inside a cocktail with gin and tonic mist, giant limes, and massive straws"). Intrigued? You should be!
Have a jelly good time at jellymongers.co.uk

In other Jelly news, Image posted an article on "Art Salad: A Retrospective" about an artist (who as you read, must be an April Fool's joke, but OH were she real...):


"Ernestine Heink-Crupsenpeltier's (1913–2001) decades-long exploration of the art salad established her as a progenitor and chief exponent of covered dish minimalism... Featuring over four hundred works, both sacred and secular, the exhibition represents a broad cross-section of twentieth-century Jell-O salad art. The show will include the artist's early series, Icons, as well as her shocking and still powerful Lime Jell-O with Baloney Strips and Roman Soldier... After exhausting the themes introduced in her early works, such as her pained, exulting, and deeply personal interrogation of motherhood, Angel in the House (apricot Jell-O, banana slices, baby teeth, and iron filings), Heink-Crupsenpeltier entered a more purely formal period, one that made her an art-world household name and brought Jell-O works out of the realm of Outsider Art and into the mainstream. Prominent among these mid-career works is the cerebral but quietly devotional Shape #4 (black Jell-O and hard-boiled eggs)... Her late masterpiece, a performance salad entitled Jell-O-rod-E-o, (featuring strawberry Jell-O, cranberry Jell-O, tapioca, gold-leaf see-saw, Cyndi Lauper, and military band) will be presented at the exhibition opening on Saturday, May 2, at 8:00 p.m."

Thanks Mom, for all the Jelly tips! 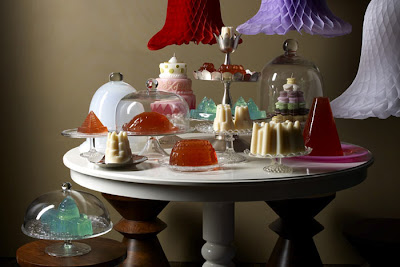 Photos via the New York Times
Posted by Nathan Hazard