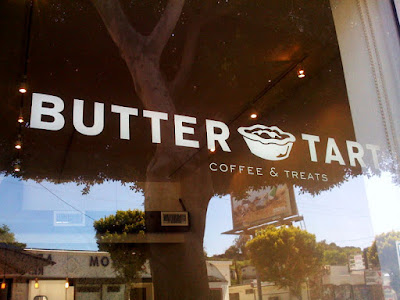 What better way to start a sunny carefree Sunday than with strong coffee, good company and a sweet/savory treat? My friend was dogsitting this past weekend in Eagle Rock and called me about a new opening down the street at Verdugo and York called Butter Tart (4126 Verdugo Road; 323.258.TART). I hadn't heard about this sumptuous-sounding café, and since I love being early on the scene (and any kind of "tart") was quick to accept the date!
Butter Tart is an unassuming storefront on Verdugo just up the block from Polka, and almost missable save for the white umbrellas and two tables out on the sidewalk. Inside is equally spare; clean wood veneer and earthy tones, brushed aluminum chairs and cardboard moose heads. We opted to sit outside (not that we had a choice, pug in tow).
The operation inside was a little tricky to maneuver, the hand-held menu lacked prices, the super-inviting website I recalled having some different offerings, and honestly I wasn't even sure where to stand in line. The sociable cashier called me over though, I asked my questions and ordered. 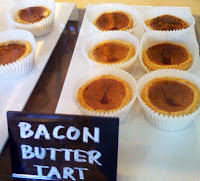 They were almost out of the trademark Butter Tarts ("an irresistible Canadian treat of a soft pastry shell filled with a savory butter and sugar filling"). But there was a Bacon Butter Tart, so no contest there. The tarts are relatively small (3") and I was feeling the need for more than a sweet treat, so also ordered the Breakfast Tart (egg, bacon, parmesan) and an iced Vietnamese coffee. And of course a hazelnut macaron to go (I craved pistachio - which were out due to the recall - so opted for "Nutella"). Everything was small, so that seemed about right. The cashier said "WOW. You ARE sampling, aren'tcha!" Which might not have bothered me, but it did. By the time my second friend ordered, they had run out of Butter Tarts (someone apparently ordered a box to go between us). And they couldn't make more. On Sunday morning. So she ordered a sandwich... 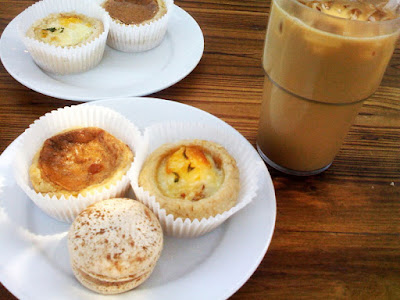 The orders were put together and brought to us outside several minutes later. What I found interesting is that nothing was warmed or changed from how it sat in the case. But I was hungry and curious so dug in. The breakfast tart was tasty, the shell was indeed rich and buttery, a hint of mustard with the egg yolk a nice touch. One bite of the Bacon Butter Tart opened every tastebud on my tongue - and helped me realize why the cashier may have "hinted" this was a lot to order. I wrapped my macaron in a napkin, tucking it away certainly for much later. Despite the tea party size of these tarts, they are of the richest mofos I've tastest in quite some time. A Butter tart tastes something like pecan pie, minus the pecans, just lots of the gooey butter stuff, on a very buttery crust, and in my case, with cubes of bacon. I began to take one bite every couple of minutes, gulping down my water and [perfect] vietnamese iced coffee inbetween. The slogan "delicious not nutritious" taunted me from the business card on the table next to my plate. And I began to fantasize about exercise...
After some conversation and digestion, I did leave Butter Tart pleasantly full on life, but lightly reminded of my bittersweet experience at another pastry fad pop-up Xooro in Santa Monica.
And the question on my mind - Beyond making a splash, can the operation pull its weight? 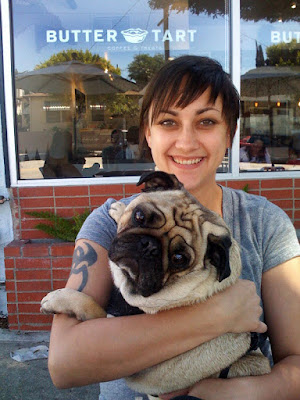