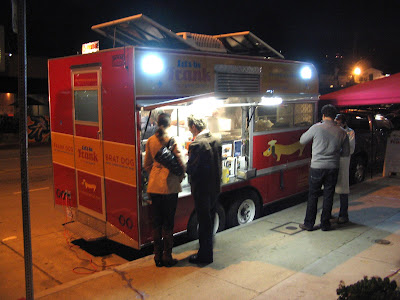 Is it the recession? The food cart is the IT way to 'dine' these days in LA, especially with cheap gourmet the likes of Kogi steadily on the rise. Not that I'm complaining.
My current haunt is Taqueria El Pastor (5179 Santa Monica Blvd, just West of Normandie, LA 90029; 323-644-9806) where the late-night Carnitas and al Pastor are scrumptious, but the extra spicy house-made hot sauces take the cake.
On the other side of the lake, brought to you every Thursday night courtesy of Silverlake Wine's hookup, another special brand of affordable delight is double-parked. Behold Let's Be Frank gourmet dogs. From San Fran comes this purist for the Pink's set, hand-making delicious brats and dogs with the highest quality ingredients available. AND at the cart they're only $5 a pop. I swung by last Thursday and stood in line between zin-lipped couples during Silverlake Wine's Thursday Night Flights for a taste of the dog. 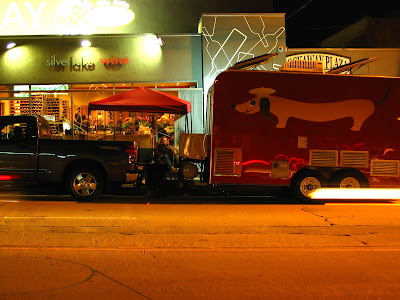 I opted for the bratwurst - always do (which felt like cheating so close to the Red Lion Tavern). The extra long brat came topped with freshly grilled onions and homemade bread and butter pickles (YUM), to which I added saurkraut and deli mustard. I must say that I was NOT disappointed. The best part that I really didn't expect was the bun - obviously homemade as well, chewy and soft, steamed to perfection. More substantial and less spongey than your average bun. The brat was perfectly spiced, beery and smokey; a touch of sweet anise to leave the last bite as satisfying as the first. 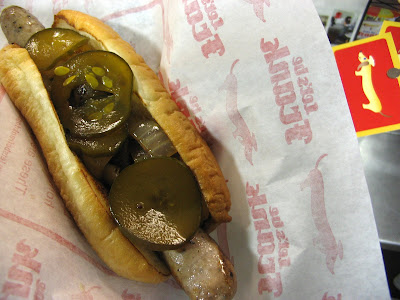 Though there was no way I could try the hot dog on the same night, on my drive home I realized I would be passing Scoops at Melrose and Heliotrope.. A phenom so revered in these parts that I am literally embarrassed and don't often share that I have NEVER HAD IT. Not for the sake of not trying, however.. In fact, I have tried to go to Scoops on MANY occasions, often after a filling jackfruit faux-pulled-pork sandwich across the street at Pure Luck. I have even begged for the famous Brown Bread ice cream through the gate being pulled in front of me at 10pm on the dot. But there was no sympathy in the icy scoop-slinger's eyes on the other side. 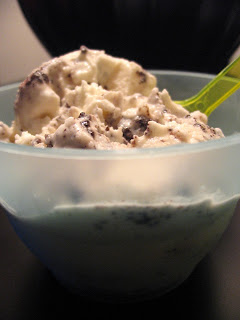 I would have to come back, again. So on Thursday night when I turned onto Heliotrope at 9:45pm and saw some people still sitting on the patio and the gate only partially pulled out to signify closing time, I held my breath, parked and RAN. I made it inside, breathing hard, and the silent room turned to look at me blankly, licking their tiny plastic spoons. The lanky casual guy behind the counter seemed unphased as I began checking out the daily selection in the cooler case. Deciding would be too difficult, especially since the Brown Bread container was emptied, so I asked what was good today and set my destiny in Cool Hand Luke's chilly palms. He pointed to the near-empty Oreo Marscapone pan, said though he doesn't eat ice cream ("if [I] can believe that"), this was easily the fluffiest, cheesiest, lightly sweet treat available. I took him up on it, and boy.. was it tasty! Basically cookies n' cream.. but with smooth Marscapone-cheesiness. Delish.
Yes, it was a two for two Thursday! I can't wait to go back to both! 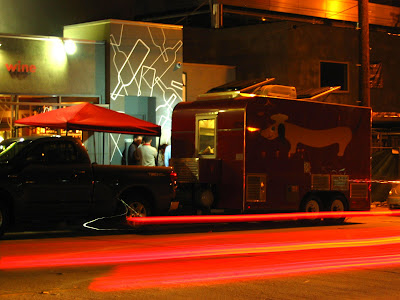