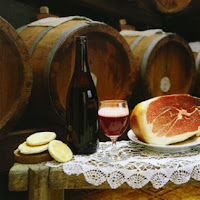 I have to admit, I wasn't hip to the Lambrusco revival trend until a few months ago, when I decided to blindly try the wire-corked Le Grotte Reggiano Lambrusco NV Rosso Dolce at Trader Joe's. Impressed by the lively complexity of this $4.99 frizzante "soft red wine", I began my research, first coming upon a New York Times article bearing a tight-lipped, winking headline "Lambrusco, No joke!"
Dismissed by wine enthusiasts as a cloying fad of the Carter-Regan era (when sickeningly-sweet Riunite Lambrusco was the top selling export wine in the US), Lambrusco is making a serious comeback, and not just in suburban parlors.
Produced in four Lambrusco D.O.C’s (or denominazione di origine controllatas): three in Emilia-Romagna and one in Lombardia (more specifically in the area extending from Reggio Emilia, through Modena, to Bologna, and up to Mantova) and dating back to ancient Rome and the Etruscans, the Lambrusco grape (now with some 60 varieties) has a rather complex heritage. The best of its wines are fizzy reds meant to be drunk young, produced dry (secco), amabile (slightly sweet) or dolce (sweet). Lambrusco is characteristically light and low in alchohol (8.5% ABV), without much in the way of tannins or body. But it is a rare thirst-quenching wine, pleasantly fizzy with a floral bouquet and tart bite - An ideal picnic wine. On the tongue, most Lambrusco are vibrantly juicy but finish dry, with lots of dark berry flavors, violet, and a bit of earthiness. I was amused by one Lambrusco wine reviewed simply by the Kinks lyric "Drink Champagne and it tastes just like Coca Cola; c-o-l-a cola..."
Because it's so à propos.
Due to the acidicity, Lambrusco wines pair wonderfully with salty Italian aperitivi (Parmigiano-Reggiano and Prosciutto di Parma) and are a perfect complement to pizza. It is also an inexpensive wine (most are under $20), a said "red counterpart to Prosecco."
So step beyond sparkling, and impress your friends at the next Spring dinner party alfresco, and pop a cork on a slightly chilled bottle of liquid velvet Lambrusco.

image via the internet
Posted by Nathan Hazard