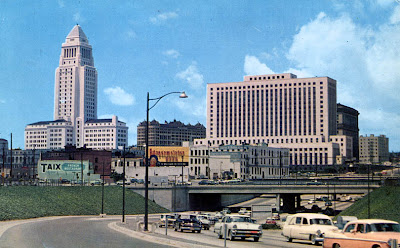 "Wow, way to take lemons and make lemonade, Nathan.."
I smiled, looking out of the plate glass lobby of the Walt Disney Concert Hall at a bride awkwardly discharging tulle out of a vintage limo door on the other side.
"Well hey," I retorted into my phone, turning toward the escalator to underground parking. "If I am going to be forced to spend a whole week or more in downtown LA with generous hour and a half lunch breaks, you can BET I will take advantage and at least get a decent blog story out of it." It was day three and I had already covered several downtown neighborhoods and classic LA dining establishments. I was officially on a jury panel in Judge Ito's courtroom and opening statements had been made. Ito guestimated a "couple day" trial, but I was prepared to be around for a while. Luckily downtown LA is one of my favorite sectors that I don't visit nearly enough. Thus I was excited for the challenge to diversify my generous lunch break each day and sample the best of what the civic center has to offer.
On day one I was a bit anxious come lunch as I was to report to a different courthouse after my break for a jury panel selection. Nervous about being late, I just followed the suits to the nearby CPK where I knew I could score a cold pint to calm my nerves. After lunch I walked through the sublevels of the California Plaza adjacent the MOCA and found everywhere I should have eaten, including the "wine country-inspired eco-artisan" Mendocino Farms Sandwiches & Marketplace barracaded by a mob of menu-wrinkling accountants. I picked up a small cup of green tea ice cream at the eurasian-vibed convenience store Famima!! and made my way back to the courthouse.
The next morning started with a long unplanned coffee break, which I filled with a piping cup of champurrado on nearby Olvera Street. Growing up less than an hour from Mexico, I understand that Olvera is touristy yes, but still a great place in LA to score some authentic cuisine, and actually introduced me to the rich frothy masa harina, chocolate, and cinnamon breakfast beverage champurrado - a hearty new favorite of mine. 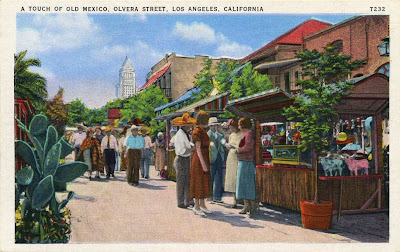 By lunch I had a new friend and she insisted on introducing me to the world famous Phillipe The Original, self-proclaimed originator of the "french-dipped sandwich." Entering this madhouse took me back in time, one long deli counter runs the length, fronted by a battalion of sandwich-makin' matrons in 50's waitress smocks and paper diner hats doling out trays to one of some 12 long lines of hungry downtowners. 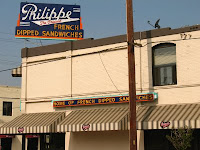 Anticpation mounted in the line as I shifted on the sawdust covered concrete floor, deciding between sandwich meat; mayonnaise-based side salads; and kosher pickled items on the side.. I ended up with an au jus-logged pork french dip with swiss, paprika dusted old fashioned potato salad, bright purple pickled egg, a sweet pickle and arnie palmer to drink. Possibly the most satisfying of my lunches all week, I was ready to get back in line for sampling #2 when my fellow juror and I realized we were running late. I will SOON return my fair Phillipe..
Day three brought me back to square one, as my new friend was dismissed from the panel and the jury was locked. I decided that today I would take a longer walk to South Main and Winston, a block down from Pete's Cafe and the hip Old Bank DVD to Vietnamese hot spot Blossom Restaurant. 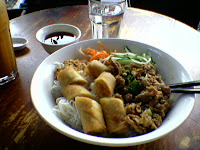 I snagged a patio table out front and immediately had an iced coffee with condensed milk and menu in front of me, waitress asking what I'd like. They obviously were used to the lunch rush here. I ordered the lemongrass steak and eggroll Bún (cold vermicelli rice noodle bowl). Within minutes I was chopstick-deep into one of the most delicious peanut-dusted cilantro-heavy Bún bowls I've ever had. I routinely enjoy Silverlake's Pho Café, but in the future might venture downtown more often for my Shaking Beef.
Since Jurors get into MOCA free with their badge, I decided after we were released at 4pm to make the most of my plan-free evening. After checking out the fantastic Martin Kippenberger Retrospective at the MOCA on Main, I continued on to his massive "Problem Perspective" installation at the MOCA Geffen Contemporary space in Little Tokyo, 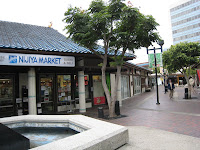 coupled with a colossal group show Index: Conceptualism in California from the Permanent Collection. I left filled to the brim; a daze that took me back to art school reviews, so I quelled myself in the Japanese Village Plaza with mindless shopping for cheap household goods at Tokyo Japanese Outlet and a dinner grocery stop at Nijiya Market, one of my favorite food shops that I affectionately refer to as the "Trader Joe's of Asian Markets." I skipped them that night, but Fugetsu-do and Mikawaya are also two essential stops in the neighborhood, sweet shops specializing in Mochi that have been operating since 1903 and 1910 respectively.
On day four I returned to Olvera Street for the food.. Most locals know to pass up the over-priced sit-down restaurants and head straight for the hole-in-the-wall counter spots that get lost among the cluttered vendor booths. Though corner mast Cielito Lindo is arguably the most popular of these, and though I usually visit La Noche Buena for my taquito, tamale and jamaica fix, Juanita's charming vendor who sold me on the champurrado earlier in the week brought me back for what may have been the best tangy guacamole sauce covered taquito combo plate on the street yet. 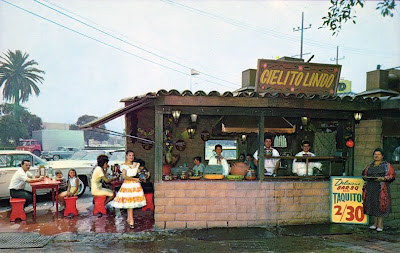 Finally, deliberation day had come, and I knew I had to use my last lunch wisely. There were so many places I had not tasted yet: Señor Fish's new downtown location, The Redwood Bar's infamous burger, historic French bistro Angelique Café, or my favorite hidden gem in Little Tokyo - the yellow-awned Daikokuya on First Street serving up the best ramen in LA. But history trumped taste buds today and I ventured down old Broadway all the way to 8th Street to finally see the eccentric Granddaddy of all cafeterias, Clifton's. The redwood forested interior was delightfully dated, though the clientele were less inviting than I'd hoped, and actually caused me to check to make sure I still had my wallet. 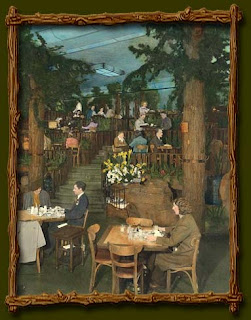 I went through with it though and moved down the line with my warm damp tray, camping it up with a carrot/raisin slaw, Americana enchiladas, spanish rice, jello, and horchata "with fruit". I settled into a table on a terraced forest step and watched the REAL downtown LA dine in front of me in all its glory. The food was.. well, cafeteria food. The fruit was a nice addition to standard horchata however. The big kick came in the form of a cube of jello. Now, I got the opaque white jello with yellow shreds thinking "festive piña colada?" No, it was not. I chewed the first bite unable to detect a flavor. Bites two and three kept me guessing. But the shreds definitely were not coconut or pineapple.. rather a little waxy. It was official this was not a sweet jello. So what WAS it? It hit me with a sickening gulp that I was eating a flavorless white gelatin filled with bland shredded American cheese. I set down my fork, gathered my belongings and left Clifton's then, happy to limit our historic affair to viewing the kitschy vintage postcards on their website.
"Part of me is a little sad," I said into the phone as the bride outside beamed for the photographer. "I've been enjoying this surreal metropolitan urban life. Like I could become a public defender, get a refurbished loft and never look back." After a pause, my friend started laughing, and before I knew it I was too.
'Til next time, downtown... 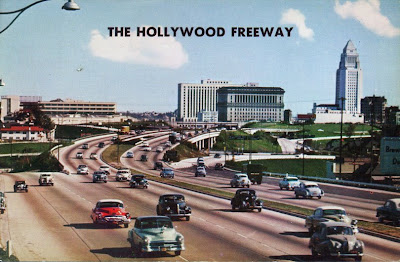