Carne Asada: STILL Not A Crime! 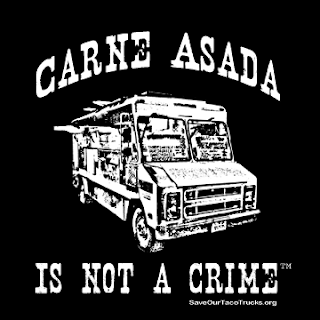 Breaking news in the fight between East Los Angeles' beloved taco trucks and the county! I got the following email proclaiming a victory for the Taco:

It’s a great day to stand on the side of hardworking Angelenos, fair capitalistic competition, and delicious food. Today in Los Angeles Superior Court, Judge Dennis Aichroth ruled in favor of our hardworking taqueros stating in part that the recently enacted law effectively banning taco trucks was “too ambiguous to be enforceable” and was “arbitrary and not based upon any rational, intrinsic or natural basis”. Furthermore, Judge Aichroth agreed with an argument we’ve championed from the beginning, writing, “this attempt to restrict the operation of catering trucks […] is a pretext for creating a “naked restraint of trade” and, as such, must be declared invalid”. In short, Gloria Molina and her developer backed cabal of myopic gentrificationists have lost. The people of Los Angeles have won.

The Taco may have won round one, but this is surely only the first battle. Get and wear your Carne Asada Is Not A Crime t-shirt proudly, write your county supervisors and urge them to stop legislating against street food, and keep up with Aaron and Chris' updates at saveourtacotrucks.org.